Jaded pundits pronounce first impeachment hearing "dull" and overly "serious." But oh my, did they feel the ratios 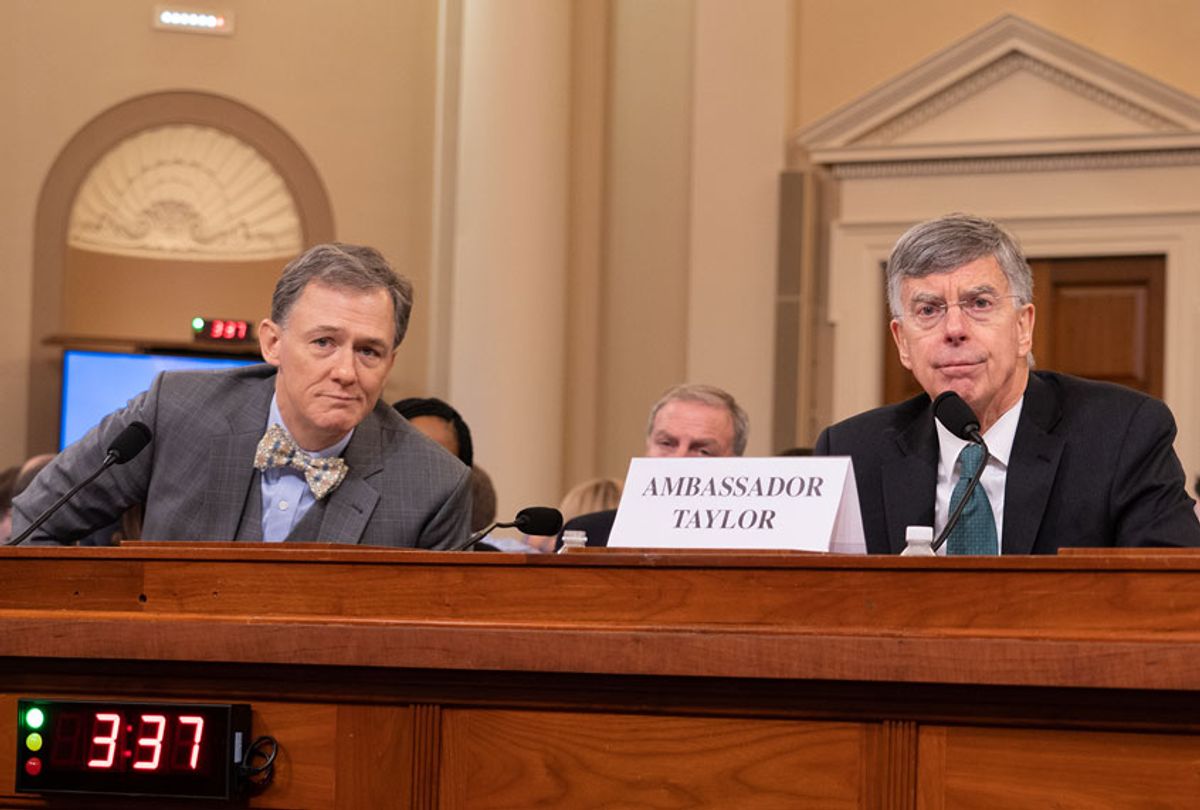 That kind of journalism is a particularly bad deal for news consumers in the Trump era. And the strong reaction against the Reuters story hopefully indicates that critical readers are increasingly ready to push back.

It’s certainly an indication that social media, in some collective way, can serve as a “public editor” holding news organizations up to their own self-professed standards.

The article, written by Reuters veterans Jeff Mason and Patricia Zengerle, was headlined “Consequential, but dull: Trump impeachment hearings begin without a bang.”

It wasted no time in likening a hearing that firmly established Trump’s abuse of presidential power to extort political dirty tricks from a client state to the lowest, most gimmicky and meaningless form of mass-media entertainment. It began:

Democratic lawmakers tried their hand at reality television with mixed results on Wednesday as they presented arguments to the American public for the impeachment of a former star of the genre, Donald Trump.

Unlike the best reality TV shows — not to mention the Trump presidency itself — fireworks and explosive moments were scarce, however.

There has been so much media criticism lately calling out political journalists for eschewing meaning and truth in favor of optics and conflict and ratings that the Reuters article could have passed for parody.

Mason and Zengerle decried the hearings as being “rather staid, with only the occasional raised voice or snippy retort.”

Then, they reported, as if this were actually newsworthy: “To the president’s son, Eric Trump, it was a big yawn.”

Getting viewers not to watch the hearings is, of course, a top Trump priority.

The Reuters reporters did acknowledge an alternative view, quoting, for instance, Rep. Val Demings, D-Fla., a member of the Intelligence Committee, saying, “We’re not here to entertain, we’re here to get to the truth so we can hold those engaged in wrongdoing, up to and including the president, accountable” — but mostly as evidence to support their thesis.

I had hoped that I was being pessimistic last week, when I expressed concern that political journalists would set the bar so high for theatrics that they would express disappointment no matter how ruinous a case the hearings made against Trump.

Now at least I am finding some cause for optimism in the breadth of the social media response.

Mason’s tweet of the Reuters story set off a Twitter maelstrom, and was promptly “ratioed” (note the prodigious imbalance between the mostly negative replies and the presumptively more positive retweets and likes):

This reply from radio host Michelangelo Signorile got exponentially more likes than the post it replied to:

Other responses to the Reuters piece that got huge amounts of positive attention included:

Tommy Vietor, cohost of Pod Save America and former Obama official: “This analysis is breathtakingly bad. New revelations about the President of the United States personally directing an extortion scheme are boring? You go with Eric Trump's spin? Truly embarrassing.”

Sarah Kendzior, cohost of the Gaslit Nation podcast: “If reporters feel the impeachment hearings aren't ‘exciting’ enough, they can go report on Trump's decades of mafia ties, sexual assaults, financial crimes, and all the other horrifying activity they failed to cover\

Salon columnist Heather Digby Parton: “The media saying the hearings are boring is just some guy's subjective opinion but it's going to infect the way the public sees the process and possibly give that monster an undeserved lifeline. Many people didn't find it boring. They found it chilling and horrifying.”

Brian Klaas, University College London professor: “This framing is so irresponsible, wrong, and a disservice to democracy. Career public servants testified that the president committed the worst abuse of power in modern US history. They exposed corruption at the highest levels. That is the headline. This isn’t a reality TV show.”

Kevin Kruse, Princeton historian: “If this stunning revelation made for a ‘boring’ hearing, then I'm not sure what people are looking for. Juggling knives? Maybe a dancing bear?”

Some Democratic politicians chimed in as well. Among them was Sen. Brian Schatz of Hawaii:

Mason’s Twitter feed has been silent since his fateful tweet. I sent him an email asking him to discuss his reasoning, and Reuters media relations emailed back that “we’re going to decline to comment.” (As it happens, not so long ago, Mason was considered a heroic figure by those who support more aggressive questioning of the president.)

Political reporter Jonathan Allen wrote on NBC's site that the hearing “was substantive, but it wasn't dramatic.” His story's tweeted subhead declared that the witnesses “lacked the pizzazz necessary to capture public attention.”

Allen wrote that the “reserved manner of veteran diplomats with Harvard degrees” made the hearing “more like the dress rehearsal for a serious one-act play than opening night for a hit Broadway musical.”

Former Obama administration official Ronald Klain tweeted: “You know who was the most boring witness I ever saw? Alexander Butterfield. And he brought down the Nixon presidency. I'm sorry that saving our democracy doesn't have enough ‘pizzazz’ for you....”

Film historian and wordsmith Mark Harris tweeted: “This is the kind of take that should apologize to America for existing.”

Not every political reporter gave the hearings a bad review, however. Far from it.

At CNN.com, Marshall Cohen, Kylie Atwood and Kevin Liptak wrote that the hearing “lived up to the hype, and the daylong affair gave both parties plenty to chew on as the inquiry moves forward.”

Indeed, most mainstream news coverage focused on the biggest new development: The revelation of an overheard phone call between Trump and EU ambassador Gordon Sondland, the day after his July 25 call with Ukrainian President Zelensky, when Trump demanded to know if he was getting his way.

Politico’s Kyle Cheney and Andrew Desiderio described it as “an explosive new detail” that “underscored the depth of Trump’s fixation with targeting Joe Biden and his son Hunter, as well as his alleged effort to exploit a U.S. ally at war with Russia in order to boost his 2020 reelection campaign.”

But I didn’t see reporting and writing that I felt captured the sweep, the severity and the momentous nature of what was going on.

Instead, I saw how political reporters, faced with facts that overwhelmingly support one political party over another, avoid saying as much.

It’s so much easier for them to lapse into comfortable, familiar, non-subjective language — even when it’s not accurate.

And the idea that that there are still questions about Trump’s connection to the scandal — that he could have been just a supporting player — is a Republican talking point not based in any reasonable interpretation of the facts. As I wrote the other day, accepting that as a framing device is self-gaslighting.

So kudos to the New York Times editor who, in between editions, rewrote the top of the paper’s lead story.

The final version removed the suggestion that Trump might not be at its center, saying the evidence “further implicated President Trump in a campaign to pressure Ukraine to publicly commit to investigating former Vice President Joseph R. Biden Jr.”

(Could someone please fund the revival of Newsdiffs?)

There is room for an intelligent analysis of the optics — and acoustics — of a televised political event. No one practices that craft better right now that New York Times television critic (and author) James Poniewozik, who called attention to Wednesday’s “authoritative voices,” and likened the hearing to “the opening scene of an international-intrigue drama: two diplomats becoming aware of disturbing news in a foreign land.”

But if reporters were going to hold the hearings up to a standard, it should have been the standard of previous impeachment hearings, or of other events with a similar goal, like teach-ins. Not reality TV.

And the day should have been put in its proper, awesome historical and constitutional significance. Washington Post Plum Line columnist Greg Sargent got as close to that as I saw. He wrote that Trump’s defense is basically “that Trump actually does possess the legitimate authority to use his office to systematically obliterate or badly weaken numerous mechanisms of accountability that are supposed to constrain him.”

Finally, to the extent that reporters felt obliged to cover the Republicans — and they did, sometimes even giving them equal time — they should have called out the GOP’s conduct as an empty exercise in confusion and distraction. It was the kind of approach that gets one juror to force a hung jury, not the kind that wins over anyone undecided.

There were not two equally plausible arguments on display at Wednesday’s hearing. It was the public unveiling of one, evidence-supported and basically uncontradicted narrative. It should have been covered that way.

Nikole Hannah-Jones, New York Times Magazine writer: “This framing really is problematic and is emblematic of a deep need for a reset in political reporting. An impeachment inquiry is not a game nor is it entertainment. It is a very serious matter with severe consequences for our democratic republic.”

Sherrilyn Ifill, president of the NAACP Legal Defense and Educational Fund: “The headline is bad, but the lede is worse. Please media — try to remember that we are in a consequential moment for our democracy — whether or not ratings are through the roof. We are in this position in some measure b/c of media treating politics like American Idol.“

Touré, host of the podcast Touré Show: “This is the sort of headline that tells readers: no need to pay attention to the impeachment hearings. They’re dull. Yawn. Boring. This does not help people understand what’s going on.”

Alternet senior writer Joshua Holland wrote on Thursday morning: “This is all a huge benefit to Donald Trump. Not only does this attitude reduce politics to a battle of entertainers — where factual reality matters less than whether you can put on a good show while spinning it — it also leads to stories that might have brought down other presidencies being buried in the news cycle because everyone already knows he’s mendacious and venal and self-satisfied — it’s old news, and new examples probably won’t get a lot of clicks.”

Response to the article after it was posted on Facebook was also brutal. On Reddit’s r/politics the sentiment was overwhelmingly that “This is a crisis, not entertainment."