Democrats would love Trump to testify before Congress. His staff is doing whatever it can to keep him off Twitter 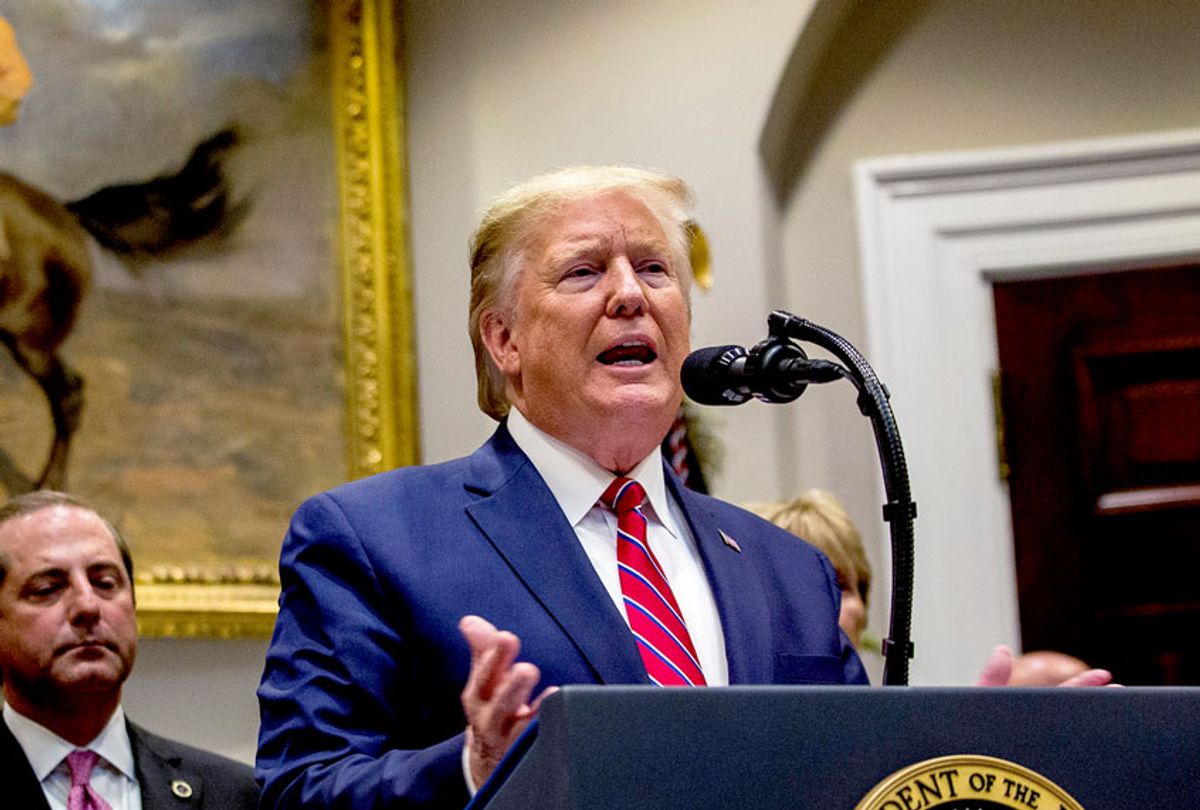 US President Donald Trump delivers remarks in the Roosevelt Room at the White House on November 15, 2019 in Washington, DC. (Zach Gibson/Getty Images)
--

On Friday, Donald Trump, with his usual sociopathic levels of impulsiveness, thought it wise to commit another likely impeachable offense in the middle of a hearing in the ongoing impeachment inquiry. As former ambassador to Ukraine Marie Yovanovitch testified to Trump's bizarre, unethical and abusive behavior, he took to Twitter to lambast her in real time, claiming that everywhere she had been posted "turned bad" and personally blaming her for the civil war in Somalia, which is the epitome of a baseless accusation. House Intelligence Chair Adam Schiff, D-Calif., called the act "witness intimidation".

When asked about it by reporters later that day, during a press conference that was ostensibly about health care pricing, Trump, as is his habit, declared that he's the real victim.

"You know what? I have the right to speak," Trump said, in response to a question that was, by being a question, an invitation to speak.

"I have freedom of speech just as other people do, but they’ve taken away the Republicans’ rights," he continued, as exactly zero people tried to turn off his microphones or shut him up in any other way.

Trump knows his followers love these victim trips so much that they'll simply ignore the fact that Democrats couldn't shut him up if they wanted to. In reality, Democrats don't want to shut Trump up at all. If anything, the opposite is true. Democrats clearly want Trump to keep that motormouth running and those rage-fingers tweeting: The more Trump uses that freedom of speech, the stronger their case for impeachment gets.

"Trump could come right before the committee and talk, speak all the truth that he wants if he wants," Speaker of the House Nancy Pelosi told Margaret Brennan of "Face the Nation" in an interview that aired Sunday. The speaker also defined what the word "exculpatory" means for Trump, safely guessing it's not a word he has much experience with.

Indeed, the only people who appear interested in silencing the president are his own staff members. As Axios reported Sunday, "President Trump's public schedule next week is designed to keep him distracted from the televised hearings — and to counterprogram Week 2 of those hearings."

Considering that the events on his schedule — a Cabinet meeting, a visit to a factory in Texas, an arts awards ceremony — are humdrum presidential activities that would barely make the news even in boring times, it's safe to say that the White House staff doesn't really see any of this stuff as "counterprogramming" that will actually distract anybody's attention from the impeachment hearings.

Except for maybe one person's attention. The obvious purpose is to keep Trump busy so he doesn't get into trouble, a management style familiar to any parent of toddlers. Frankly, it's a smart move, as Trump's behavior last Friday showed. Even on Fox Business, which has been fiercely pro-Trump, a host cracked and said that his Twitter behavior "makes him look like a big dumb baby" and draws  more attention to the hearings than if he could just sit still with his coloring book like a big boy.

Odds that White House staff can use Trump's busy schedule to keep him off the internet completely, however, aren't looking good. Even though tweeting invective at Yovanovitch backfired on Trump Friday, he kept it up over the weekend, lashing out at Jennifer Williams, who is an aide to Vice President Mike Pence and a foreign service officer. Williams will reportedly give testimony about Trump's phone call with Ukrainian President Volodymyr Zelensky that is expected to make the already clear extortion scheme even clearer.

Trump's tendency to get even more riled up whenever women criticize him is no doubt a major concern for his staff going into this week. Multiple women — not just Williams, but also Laura Cooper, a deputy assistant secretary at the Defense Department, and Fiona Hill, a former Russia specialist at the National Security Council — are expected to testify before the Intelligence Committee. That's a lot of women saying stuff about Trump that happens to be both true and damning. Everyone knows that's an especially potent trigger for his ill-advised outbursts.

The big-mouth problem isn't limited to Trump, either. His lawyer, co-conspirator and all-around odious lackey Rudy Giuliani seems not to understand, even though he used to be a federal prosecutor, why suspected criminals invoke their Fifth Amendment rights. Instead, Giuliani's addiction to Twitter and TV cameras means that he constantly says things that incriminate himself or the president or whoever else is in the line of fire.

SIt's not just Trump who is playing the victim of censorship by Democrats when the real issue is censorship from the White House itself.  House Republicans are also getting in on this victimology trip, complaining that the witnesses called so far aren't close enough to the White House to be authoritative about what actually happened, and implying that Democrats are silencing such witnesses.

This is a lie, of course. There's plenty of documentation showing Trump at the center of the extortion plot against Ukraine.  But it's a lie wrapped in an even bigger lie, because there are several high-ranking administration officials who were directly involved in the Ukrainian extortion scheme, such as acting chief of staff Mick Mulvaney (who has already confessed on TV) and outgoing Energy Secretary Rick Perry, whose centrality to the scheme was once again confirmed in a recent batch of leaked emails.

These people are right in the middle of things and could speak directly to what the president said and did. Trump has instructed them not to testify. In fact, Trump has tried to prevent anyone who has information from testifying, reportedly lambasting Secretary of State Mike Pompeo for failing to do more to block State Department employees from showing up under subpoena.

The censorship isn't coming from the Democrats, who have a red carpet rolled out for anyone and everyone in the Trump administration who wants to talk. It's coming strictly from Trump, his staff and fellow Republicans, all of whom know that the last thing Trump needs is more information reaching the public. Republicans' big problem is that the man they've self-tasked with defending has an irrepressible need to incriminate himself and commit more crimes. So while they're whining about "freedom of speech," Donald Trump refuses to exercise his constitutional right to remain silent.