Are Republicans even trying to defend Trump? Or just doing Vladimir Putin's bidding? 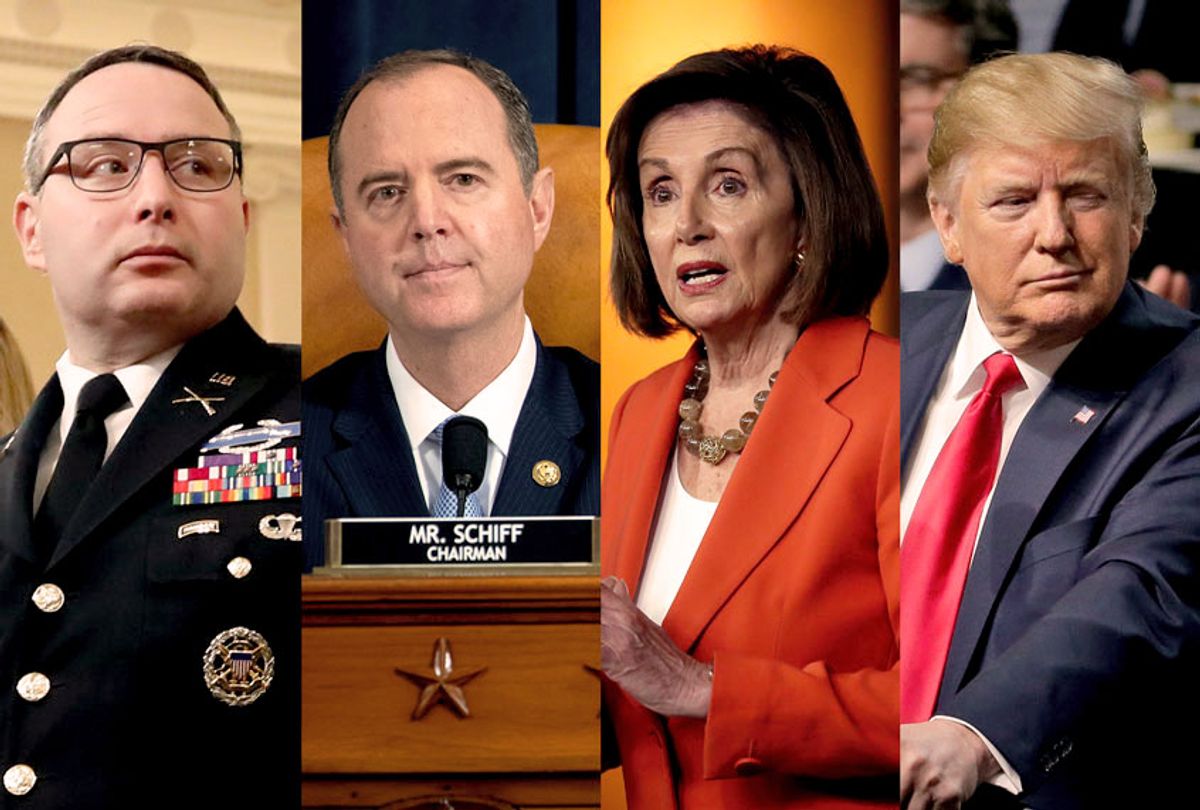 Last Friday, President Trump made the huge error of committing an impeachable offense while a House impeachment hearing was underway, by seeking to intimidate former Marie Yovanovitch, the former ambassador to Ukraine — who he had already threatened during the famous July phone call with Ukrainian President Volodymyr Zelensky. He did it again over the weekend with this insult toward Jennifer Williams, an aide to Vice President Mike Pence, who heard that call.

Someone seems to have gotten through to Trump since then, because he didn't personally insult or threaten the witnesses during Tuesday's marathon hearings. He did, however, retweet insults by others and issued an official White House tweet questioning the integrity of the National Security Counsel's Ukraine expert, Lt. Col. Alexander Vindman. In his one appearance before the cameras, he made a snotty observation that Vindman had worn his U.S. Army uniform to the hearing, implying — as did several Republican members of the House Intelligence Committee — that he was being theatrical. There was a time when they would have swooned over any military dress uniform covered with salad. Now they only revere those who commit war crimes.

Mostly the president relied on Republicans to do the fighting for him and they did the best they could, denigrating the process, as usual, and spinning out as many conspiracy theories as they could, often confusing witnesses who had no idea what they were talking about. No doubt the Fox News audience understood it all very well, having been indoctrinated in these right-wing fever dreams ever since Trump assumed office. And no doubt the president appreciated the effort.

But it was not a good day for him. Vindman testified that Trump's demand that a foreign government investigate a U.S. citizen and political opponent was inappropriate. He was backed up in that assessment by the three other witnesses: Williams, former Ukraine special envoy Kurt Volker and National Security Council staffer Tim Morrison, a hawkish former GOP congressional aide. All of them had been expected to be somewhat  Trump-friendly witnesses, throwing cold water on the idea that the president had engaged in unethical behavior. It didn't work out that way.

When asked about details of the so-called Biden corruption scandal, they all agreed that it was political in nature, putting the lie to the absurd GOP insistence that the great anti-corruption crusader Donald Trump was just trying to clean up Ukraine. Volker did a major rewrite of his earlier testimony, in which he had said he never heard anything about Biden being investigated. After seeing all the testimony, this longtime diplomat and sophisticated political player said his memory has been refreshed and he now knows he didn't fully understand the situation and if he had he would have spoken up.

Democrats let Volker off easy, probably because he confirmed other aspects of the case. Republicans weren't happy since they had demanded his testimony and were counting on him to say he hadn't seen anything wrong.  Morrison was expected to be helpful as well, but he really wasn't. He said he was concerned about EU ambassador Gordon Sondland's relationship with the president and the connection of aid to investigations. He said he reported events to National Security Council lawyers, even while insisting there was nothing wrong with the president's call with Zelensky. Whatever help he might have given was almost certainly offset by his acknowledgment that the demand for investigations from a foreign government in exchange for military aid was wrong.

In that, these witnesses agree with 70% of the American people.

Now that we've watched three long days of hearings it's pretty clear that the Republicans aren't just interested in challenging witnesses or offering a defense of the president's actions.  They see this as an opportunity to advance the same conspiracy theories that Trump and Giuliani were pressing the Ukrainians to announce they would investigating.

Despite being thoroughly and repeatedly debunked, largely on the basis of a timeline that refutes their premise, the bogus corruption scandal around Joe and Hunter Biden remains a live issue, as far as Republicans are concerned. The facts of the case are of little interest to them. They simply want to keep talking about it in order to justify the president's actions and keep the so-called scandal viable as a political weapon should Biden win the Democratic nomination. It is the patented "but her emails" strategy, which you have to admit was highly successful.

It's somewhat more interesting that Republicans are spending a lot of time talking about the other investigation Trump so desperately wanted. That would be the alternative narrative in which the Ukrainians framed the Russian government for the 2016 election interference in an effort to help Hillary Clinton, what Trump referred to as "CrowdStrike" in the infamous call. I won't go into the details here. If you are unfamiliar with the so-called details of this loony conspiracy theory, you can read about it in this Salon article by Bob Cesca. Suffice it to say there is no basis for any of this and the main people who benefit from its continued dissemination are Donald Trump and Vladimir Putin.

This isn't just another crazy right-wing distraction, however.  The consensus in the American intelligence community, as well as that of our allies, is that it was the Russians who hacked into Democratic emails and had them distributed, much to Trump's delight. The president and the Republican Party are spreading this counter-narrative blaming Ukraine — a narrative allegedly planted by Russian agents — as a green light to Russia to interfere in the 2020 election.

I'll say that again: The entire Republican Party is now acting as a Russian ally, eager to spread Putin's lies blaming Russia's regional adversary for what his own agents did. Even if Trump doesn't win next year, the Russians will have successfully pumped these toxic narratives into the American body politic, and made it very ill.

In the hearing on Tuesday, Republicans repeatedly slandered Speaker Nancy Pelosi with this doctored quote:

That's not correct. What Pelosi actually said was this:

.The weak response to these hearings has been, “Let the election decide.” That dangerous position only adds to the urgency of our action, because the President is jeopardizing the integrity of the 2020 elections.

Even after the Mueller report was released, Pelosi didn't want impeachment. She and many others in the Democratic Party believed it would be a mistake to take the president on for his 2016 actions and the subsequent cover-up when another election was imminent. But when evidence emerged that Trump was actively trying to sabotage the 2020 election by letting Russia off the hook for 2016 — and was trying to bribe or extort foreign leaders into smearing Democrats — she really had no choice.

Trump doesn't have a lot of running room to set up any more foreign shakedown schemes before 2020, so the impeachment process is probably doing some good in keeping him confined. But Republicans have taken the baton and are running with it as best they can in these hearings, basically saying, "Russia, if you're listening, we have your back." Indeed, they are sending that signal to anyone who wants to interfere. The best hope the Democrats have is that the electorate as a whole will see through it this time.