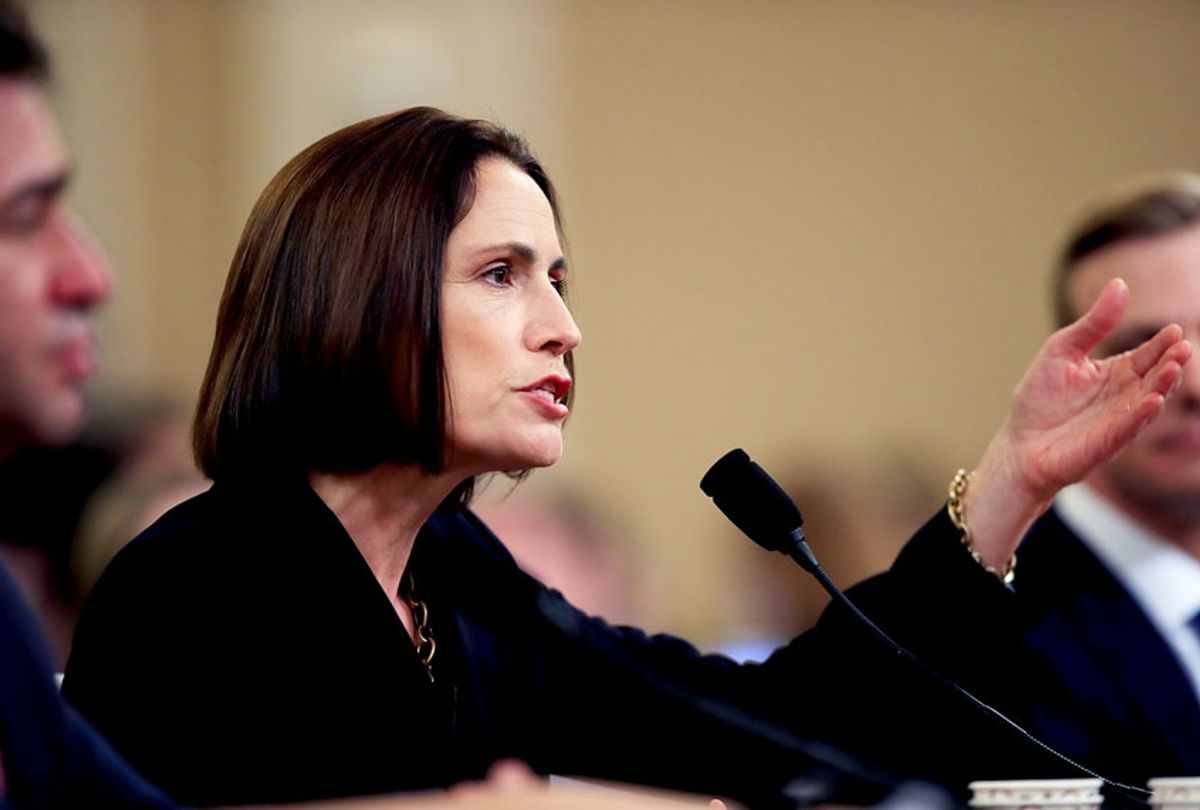 Rep. Raja Krishnamoorthi, D-Ill., brought up a Soros conspiracy theory pushed by longtime Trump adviser Roger Stone, who has since been convicted in the Russia probe, that Hill was a “mole” for the billionaire.

Hill, the former top NSC official overseeing Europe and Russia, replied that the conspiracy theories about Soros were an “absolute outrage.”

"This is the longest-running anti-Semitic trope that we have in history, and a trope against Mr. Soros was also created for political purposes, and this is the new Protocols of The Elders of Zion,” she said, referring to a 19th-century Russian forgery casting Jews as evil and all-controlling. That book, she added, is still published to this day.

Hill noted that a Soros conspiracy theory was at the heart of the smear campaign against former Ukraine Ambassador Marie Yovanovitch.

"When I saw this happening to Ambassador Yovanovitch again, I was furious, because this is, again, just this whipping up of what is frankly an anti-Semitic conspiracy theory about George Soros to basically target nonpartisan career officials, and also some political appointees as well, because I just want to say this: This is not indiscriminate in its attacks," she said.

Soros, the billionaire Democratic donor at the center of countless conspiracy theories going back decades, has been invoked with increasing frequency by Trump’s legal advisors as Republicans in Congress struggle to come up with a coherent defense for the president in the impeachment probe.

Trump attorney Rudy Giuliani claimed to Blaze TV host Glenn Beck on Wednesday that Soros is at the heart of the president’s efforts in Ukraine to investigate “corruption,” even though numerous Trump administration officials have testified that he was not interested in Ukrainian corruption and simply wanted to hurt former Vice President Joe Biden’s presidential campaign.

Giuliani said that the new Ukrainian government “took all the corruption cases away from the prosecutor general” and “gave it to the anti-corruption bureau,” which he claimed “got rid of all the cases that offended Soros, and included all the cases against Soros’ enemies.”

"One of the first cases they dismissed was a case in which his NGO, AntAC, was supposed to have embezzled a lot of money, but not only that, collected dirty information on Republicans to be transmitted, gotten by Ukrainians, to be transmitted to this woman Alexandra Chalupa and other people who worked for the Democratic National Committee,” he said. "The first case that [former prosecutor Yuri] Lutsenko tanked was that case at the request of the ambassador.”

Giuliani’s baseless Soros conspiracy was predicated on comments Lutsenko made to conservative columnist John Solomon, whom Giuliani said he worked with to push the Trump Ukraine narrative in conservative circles and on Fox News. Lutsenko has retracted the comments he made to Solomon. Solomon has not retracted his report.

Senior State Department official George Kent testified to Congress that Solomon advanced a false narrative pushed by Lutsenko, who was forced out due to corruption, in which Yovanovitch had given him a “do-not-prosecute list.” Multiple impeachment witnesses have testified that the smear campaign against Yovanovitch was entirely baseless, and Kent testified that Solomon’s report was filled with “non-truths and non-sequiturs.”

Fox host Lou Dobbs and Joe diGenova, an attorney Trump tried and failed to add to his legal team but who continues to advise the president and helped Giuliani’s Ukraine effort, claimed earlier this month that Kent himself is part of the Soros conspiracy.

“His motives seem peculiar to me. John Solomon reported in March that George Kent pressured Ukrainian investigators to back off an investigation from the anti-corruption action center that a George Soros group sponsored,” Dobbs said, citing Solomon’s discredited reporting. “This is a complicated deal here. And it seems he wanted to keep an investigation of Ukrainian corruption with limits on it.”

“There's no doubt that George Soros controls a very large part of the career foreign service of the United States State Department,” diGenova opined, without citing any evidence. “He also controls the activities of FBI agents overseas who work for NGOs — work with NGOs. That was very evident in Ukraine. And Kent was part of that. He was a very big protector of Soros.”

“He corrupted FBI officials, he corrupted foreign service officers,” he added. “And the bottom line is this, George Soros wants to run Ukraine and he’s doing everything he can to use every lever of the United States government to make that happen, for business interests, not for good government business.”

A spokesman for Soros demanded a retraction from the network, citing the “widely discredited reporting of John Solomon … that has been debunked by the US State Department and recanted by Mr. Solomon’s main source.”

“It’s bad enough that commentators on your air regularly engage in the most grotesque anti-Semitic slurs against Mr. Soros,” the statement said.

Hill was not the only impeachment witness to call out the baseless conspiracy theories at the heart of Giuliani’s Ukraine claims.

Trump's former Ukraine special envoy Kurt Volker, a witness requested by Republicans, testified on Tuesday that he told Giuliani that Lutsenko “was not credible and was acting in a self-serving capacity.”

Volker said that Giuliani told him that “he had already come to the same conclusion,” even though the president’s attorney continues to push Lutsenko’s discredited and retracted claims.

In September, Giuliani falsely claimed to CNN that Soros used a non-profit to develop the “dirty information that ended up being a false document that was created in order to incriminate Manafort.”

Giuliani was referring to the infamous “black ledger,” a real document detailing secret payments made by Ukraine’s former Russian-backed president and former Manafort boss Viktor Yanukovych, which ultimately forced Manafort out of the Trump campaign. David Holmes, a U.S. diplomat in Ukraine, testified on Thursday that the black ledger was certainly “credible.”

“I’m not aware that Bob Mueller did not find it credible,” Holmes shot back. “I believe it was used in other corrupt proceedings. Its credibility was not questioned in those proceedings.”

Nunes then claimed that the journalist who exposed the ledger aimed to “go after a Trump campaign official.”

Holmes replied that the journalist simply aimed to “expose corruption in Ukraine.”

This conspiracy theory appears to be at the heart of the entire Trump-Giuliani Ukraine expedition, which is centered on the false claim that former Vice President Joe Biden forced out former Ukrainian Prosecutor General Viktor Shokin because he was investigating a company that employed his son, Hunter Biden. In fact, Shokin was fired after a western consensus demanded his removal over allegations of corruption and the investigation into Hunter Biden’s company was already closed due to lack of evidence at the time.

Daria Kaleniuk, the co-founder AntAC, the Soros-funded non-profit repeatedly cited by Giuliani, wrote that Shokin pushed the conspiracy theory to Giuliani, Solomon, and others in retaliation to their anti-corruption efforts.

“In 2016 we called for [the] resignation of corrupt prosecutor Shokin for intimidating reformers in his agency and failure to investigate corruption crimes of Yanukovych associates, including Burisma case,” she wrote. “In response Shokin fabricated [a] criminal case against us.”