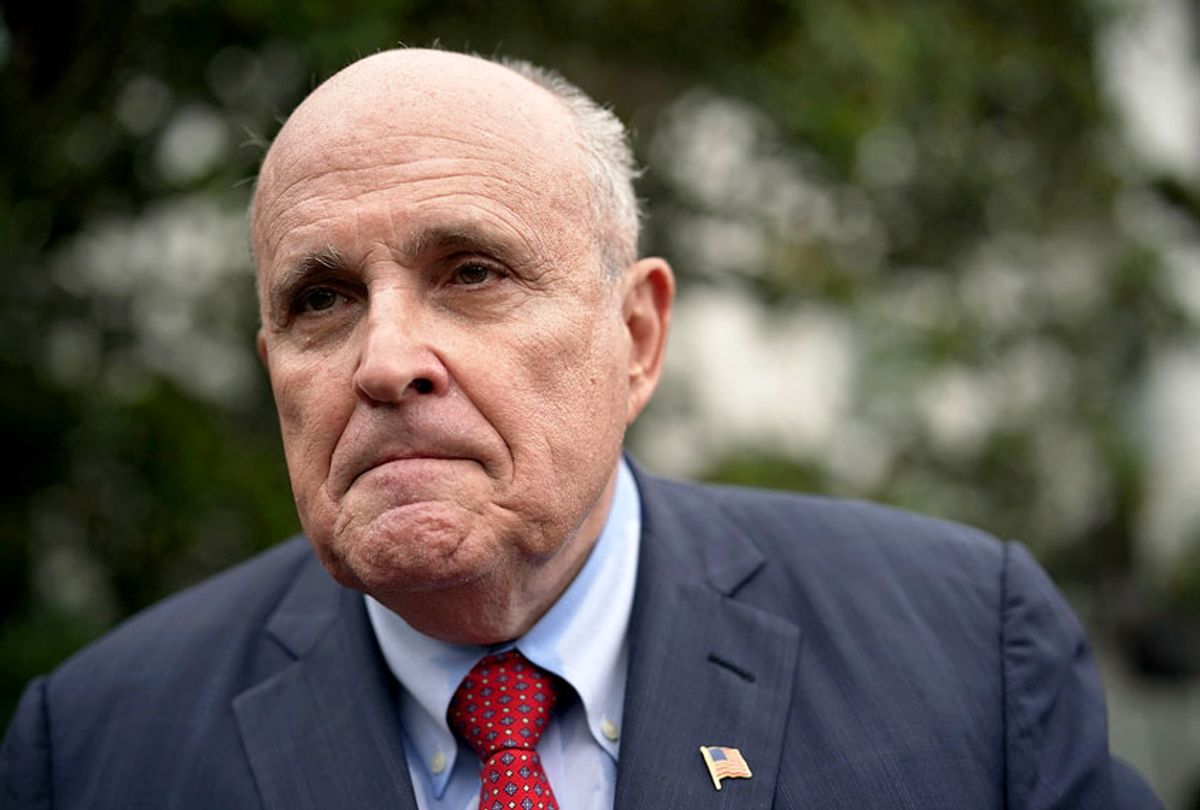 Former New York City Mayor Rudy Giuliani, who is now a lawyer for President Donald Trump, tweeted on Saturday that his earlier comments about having "insurance" if Trump throws him under the bus to escape impeachment were "sarcastic" and, at the same time, a warning to former Vice President Joe Biden's family.

"TRUTH ALERT: The statement I’ve made several times of having an insurance policy, if thrown under bus, is sarcastic & relates to the files in my safe about the Biden Family’s 4 decade monetizing of his office," Giuliani tweeted. "If I disappear, it will appear immediately along with my RICO chart."

On previous occasions Giuliani has seemingly intimated that he could retaliate against Trump if the president and his supporters decide to make him into a scapegoat to protect the president from impeachment. In an interview with Fox News' Ed Henry on Saturday, Giuliani said that "I’ve seen things written like he’s going to throw me under the bus. When they say that, I say he isn’t, but I have insurance."

He added, "This is ridiculous. We are very good friends. He knows what I did was in order to defend him, not to dig up dirt on [former Vice President Joe] Biden. This goes back a year ago, before Biden had even decided to run for president."

Earlier this month Giuliani had the following exchange with The Guardian.

In a telephone interview with the Guardian, in response to a question about whether he was nervous that Trump might “throw him under a bus” in the impeachment crisis, Giuliani said, with a slight laugh: “I’m not, but I do have very, very good insurance, so if he does, all my hospital bills will be paid.”

Giuliani’s lawyer, Robert Costello, who was also on the call, then interjected: “He’s joking.”

There have been other indications that Republicans may try to pin the scandals besetting Trump in the impeachment inquiry on his attorney. Earlier this month Gordon Sondland, the president's ambassador to the European Union, testified that Giuliani had tried to arrange a quid pro quo with the Ukrainian government to get them to publicly announce investigations into Burisma, a Ukrainian gas company that employed Biden's son Hunter, as well as into a conspiracy theory that there was a missing Democratic National Committee server from the 2016 election in Ukraine. Although Sondland said that Giuliani "was expressing the desires of the President of the United States," Rep. Doug Lamborn, R-Colo., suggested to reporters outside the hearing room that if Giuliani was "off on his own mission doing things that people didn't know about, kind of like a loose cannon, then that's a Rudy Giuliani thing, that's not a President Trump thing."

Earlier this month a Republican member of one of the impeachment committees conveyed a similar thought to Axios.

The controversy over Trump involves concerns about whether he withheld $391 million in U.S. military aid to Ukraine in order to compel Zelensky to publicly announce investigations that would either discredit the accusations that the Trump campaign colluded with Russia and/or politically harm Biden, who polls have previously suggested would be among the strongest Democrats to oppose Trump in next year's election.