The wives of the Internet don’t approve

Meet the "Anti-Wife Guy," whose man-child identity stems from living in opposition to his humorless wife 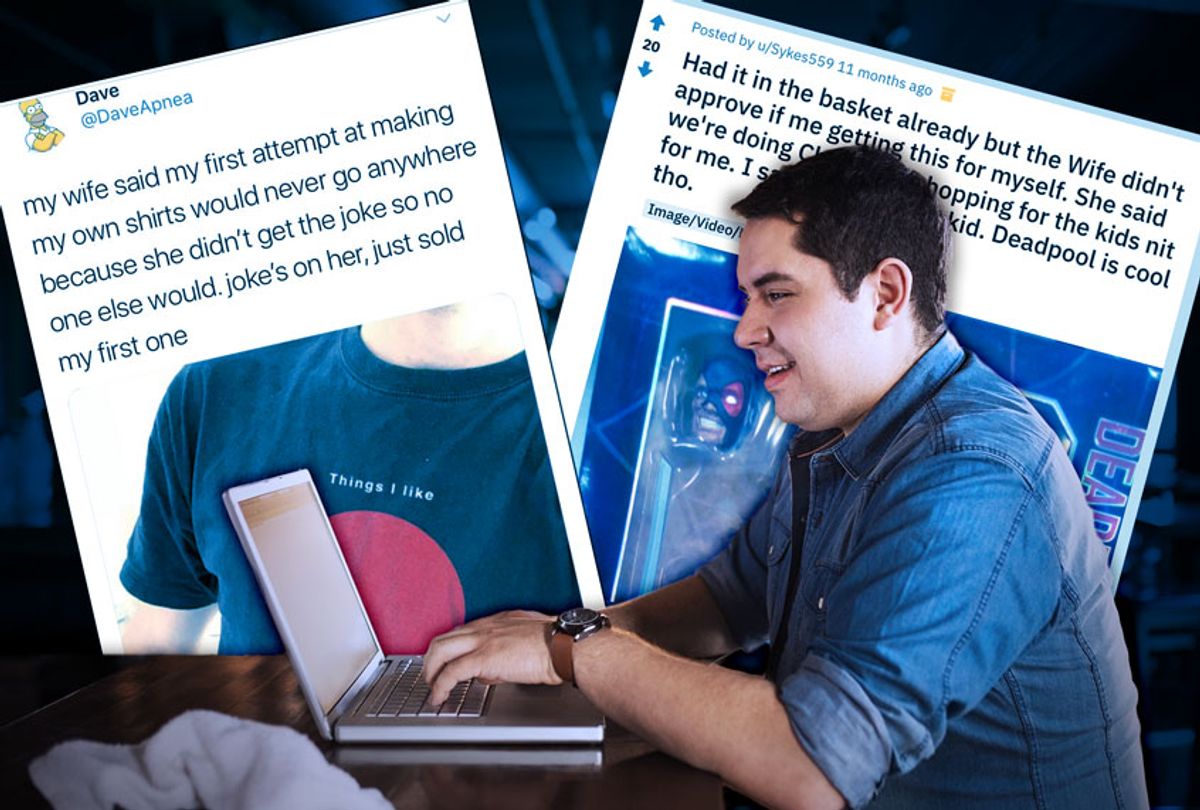 Husbands of the internet insist their wives don't get them. (Getty Images/Reddit/Twitter/Salon)
--

If you live in the Anglophone world and use the internet, you may already be familiar with /r/funny. With 27.3 million subscribers, /r/funny — pronounced  "R slash funny" when spoken aloud — ranks as the most popular subreddit, the neologism to refer to topical forums on the eponymous link aggregation site. Like nearly all subreddits, /r/funny operates on the principle of social Darwinism: people post things that they believe are funny — and which adhere to the lengthy and somewhat contradictory list of moderator rules that run along the side of the site — and account-bearing users then vote on what they like. Those posts then rise to the top of the subreddit.

Hence, one scrolling to the /r/funny homepage this morning would see a webcomic by Little Porpoise about an anthropomorphic human heart wielding a knife; a visual pun on the word "telekinesis"; and a prank video filmed by a man tricking his mother into sitting on an air horn. All of these were, per Reddit's userbase, voted to be the most funny posts of the moment.

Because of the Darwinian nature of Reddit and the vast size of /r/funny's subscriber base, statistically speaking, the funniest videos should populate the homepage. But of course, humor is relative. There is a gulf between what you find funny and what a specific subset of internet users do. Thus, /r/funny is less of a repository of laughs, and more of an anthropological study on contemporary humor, and the popular idea of what "funny" means. It is a window into the zeitgeist.

Like much of Reddit's ever-critical userbase, I am often perplexed at the kinds of things that are upvoted on /r/funny. Still, I find myself coming back frequently over the years — sometimes to laugh, other times to cringe at the bizarre, frequently offensive, occasionally propagandistic images and videos that rise to the top.

Observing it over the years, you start to notice trends, certain topics or rhetorical constructions that recur among popular posts. One such trend, oft-seen but woefully unwritten about, is something I like to call the "Wife Didn't Approve" post. Usually, these posts consist of a picture of something that an adult man is doing, or is about to do, or wishes to do; the object is frequently puerile, and often involves something phallic, childish, or both.

The captions to the "Wife Didn't Approve" posts are performative. Here is something that is fun that I am doing, the men say. Yet my wife, who is not fun, does not approve. Isn't that relatable?

These kinds of posts are not, of course, confined to Reddit. Internet memes are ephemeral; they leak between the huge content aggregators and social media sites, and hence, Facebook, Twitter, Instagram, 9gag, and other similar sites have thousands of variations on "Wife Didn't Approve."

A pattern like this always hints at something deeper happening socially and culturally. Why, then, are "Wife Didn't Approve" posts so popular? While we cannot easily gauge whether the people "liking" these posts are men or women, the rhetorical construction of it suggests that it is playing on a familiar sexist stereotype: the humorless, fun-killing protagonist's better half. Beyond that, there's the notion of marriage as some kind of entrapment, an end to the fun life of a bachelor. The men in these kinds of posts are implied to be immature, and celebrating their immaturity. Their partner, evidently, saps their youthfulness from them. They are rebelling against her regulatory whims, or so the posts seem to imply.

The "Wife Didn't Approve" guys are an interesting juxtaposition to the nascent internet phenomenon of the Wife Guy. The Wife Guy is a social media archetype whose personality is defined by his partner and his devotion for her. The phrase starting making rounds after a now-infamous Instagram post from Robbie Tripp, whose self-congratulatory writing about his wife's body became a viral, much-mocked meme. As the New York Times' Amanda Hess wrote, the Wife Guy is "worthy of suspicion because he appears to be using his devotion to his wife for personal gain." And Tripp was the consummate Wife Guy, inasmuch as he helped normalize the neologism "Wife Guy," as his life, vis-a-vis Instagram at least, revolved around depicting himself as a hero for loving his "curvy" partner. Capitalizing on that virality, Tripp later made a music video celebrating zaftig women like his wife.

In contrast to Wife Guys like Tripp, the "Wife Didn't Approve" guy — or Anti-Wife Guy, as I call them — defines his identity as counterposed to his wife. His existence is set against her rules, wishes or goals. Anti-Wife Guy is, thus, an anti-hero, a perpetual child whose baser impulses have to be curbed by his wife, who behaves more like a mom. Anti-Wife Guy basks in puerile humor and childish hobbies. He is who the man-cave was invented for. But his ability to engage in such hedonism is foreshortened by his wife's domineering disapproval. Or, so say the memes.

It is probable, given the huge amount of Anti-Wife Guy content, that many Anti-Wife Guys are exaggerating their wives' point of view. Perhaps in many cases, said posters either don't have wives, or their wives actually do approve, or they don't care. But the employment of the "Wife Didn't Approve" phrase allows one to play on recognizable archetypes — both of the fun-hating harpy wife and of the manchild husband — that many in the Anglophone internet world identify with. Infusing memes and jokes with "wife didn't like this" or "wife disapproved" adds a new element — the idea of opposition, and of the poster and reader taking part in a collective subculture with all the other Anti-Wife Guys. As an omnipresent meme that plays on sexist stereotypes, the Anti-Wife Guy is not that dissimilar from Anti-Vax Mom.

One of my favorite Anti-Wife Guys, and perhaps the most self-aware example I have ever seen, appears on the X-Men subreddit in a post from about a year ago. In this post, an Anti-Wife Guy posts a picture of a Deadpool action figure that he stuffed in the family shopping cart without his wife's approval.

"Had it in the basket already but the Wife didn't approve [of] me getting this for myself," he writes. "She said we're doing Christmas shopping for the kids [not] for me. I says Im a big ass kid."

"Why does every persons' marriage on reddit sound awful?" someone asks in the comments. The Deadpool-loving Anti-Wife Guy contemplatively replies:

Haha because our [wives] don't let us be ourselves at times haha. My wife [has] had [it] with the stacks of comic books I have in my living room. I also just recently started collecting Figurines an[d] she was like[,] ["You] don't get full its never enough for [you"]. Lol. [...] I see it as we are some big ass kids and our wives are like our moms. No "don't get that" or "no can go there" and "that bad for your health" [...] I guess that's why we love them. My marriage is [great] can't complain.

There is something tragicomic about the Anti-Wife Guys and those who love them. Why get married if your partner disapproves of everything you do? Younger generations have taken to mocking the tendency of Boomer cartoonists to celebrate hatred of one's life partner — as if marriage were something we must endure because monogamy and partnership are more important than happiness.

Those irrational Boomer beliefs about love and commitment abound in media: Al Bundy and his family on "Married With Children" perhaps best exemplify this nascent male Boomer attitude towards matrimony. The two sentiments are related, but not quite the same, I think: Anti-Wife Guy isn't a Boomer meme specifically, as the Anti-Wife Guy's modus operandi is to depict his partner as shrill, nagging, and mom-esque; whereas the Boomer wife-hater merely detests his partner.

One of the defining traits of a patriarchal society is that its men have more freedom to do what they please, whereas women are socialized to be bound to a specific subset of duties that serve men's needs. Hence, men are taught that they have the ultimate freedom to pursue their passions and pleasure, and hence, don't have to grow up. In many cases, men aspire not to. Women are acculturated to take on more housework and childcare labor, and therefore responsibility. Despite the successes of the modern feminist movement, there is still a vast housework labor gap, and a concomitant childcare labor gap. As with many stereotypes, Anti-Wife Guy's stereotyped partner springs on the sad reality of this social situation. I suspect I would be miffed by my partner, too, knowing that I lived in a society where he was expected to embrace behaving like a child, and I was expected to embrace housework and childcare.