Gov. Jay Inslee, who bills himself as as a climate change–aware politician, has some green advice for Bloomberg 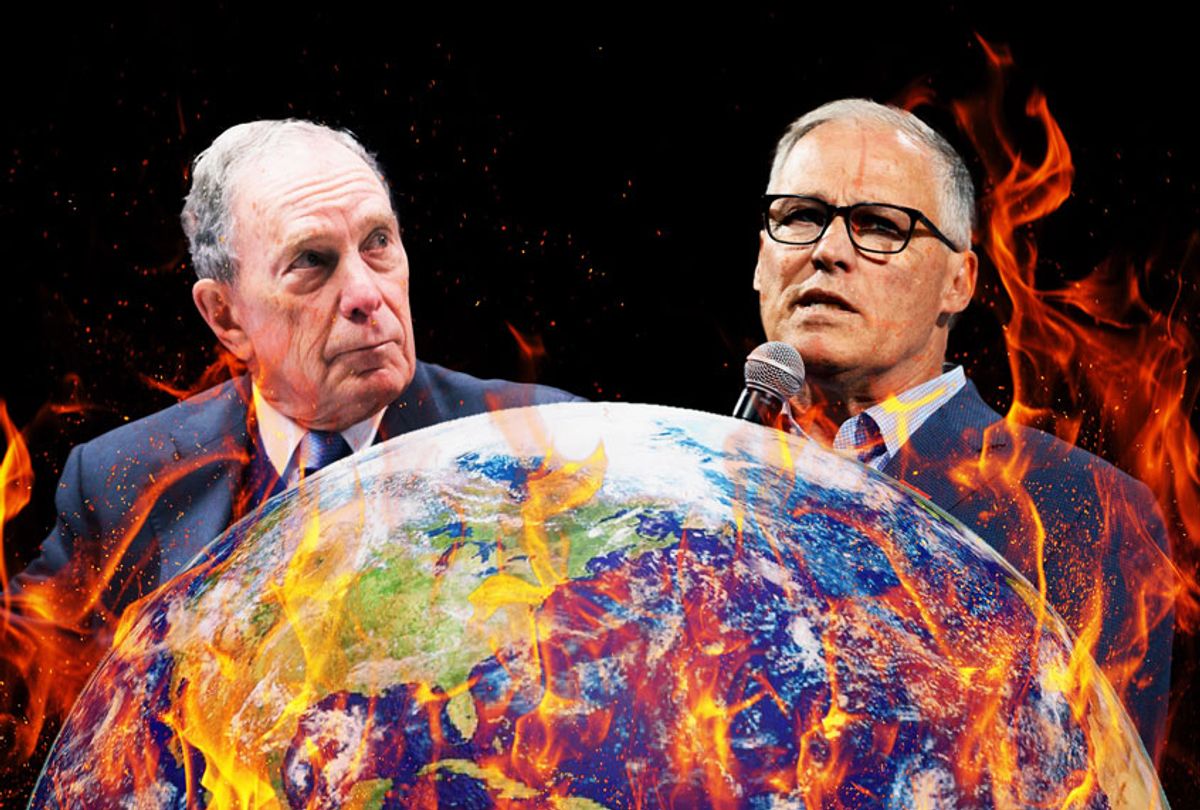 Gov. Jay Inslee of Washington, who sought the Democratic presidential nomination earlier this year by distinguishing himself on his stance on global warming, told Salon that he is “encouraged” to see former New York City Mayor Michael Bloomberg focus on global warming in his candidacy, but hopes he will adopt Inslee’s own bold plans for addressing the crisis.

“Climate change is the existential threat of our time, and I am encouraged to see presidential candidates giving this issue the attention it requires,” Inslee told Salon by email. “I hope that Bloomberg will join others in the race in adopting my climate plans and committing to take the bold action that this crisis requires.”

Salon learned that Inslee has not spoken to Bloomberg since the latter entered the race, even though Inslee distinguished himself as the candidate with the most developed plan for addressing climate change. A spokesperson for Inslee noted that other Democratic candidates have adopted aspects of Inslee’s plan, most notably Sen. Elizabeth Warren of Massachusetts. They also noted that a number of the current candidates had reached out to Inslee after he withdrew from the race in August to get his thoughts on climate change. These included three of the consistent frontrunners — Warren, Sen. Bernie Sanders of Vermont, and former Vice President Joe Biden.

Speaking with Salon in May, Inslee described how “there is an apocalypse out there where things become unrecognizable to us” as a result of global warming. He also argued that “this is all the issues, not a single issue. And all of the things that we would like to achieve — which are better health, a better economy, a more secure nation — cannot be achieved unless you are victorious over this one problem. So everything else depends on this. And by necessity we have to win this or other victories are not possible.”

He also said that his detailed plan, which would focus on creating millions of jobs and rebuilding America’s infrastructure while addressing climate change, “complimented the aspirations of the Green New Deal,” for which he said he was “very appreciative.” During an interview with Salon in August, he further added that “we need to get down to brass tacks and find out who’s got both the gumption and the vision and the willingness to take on the fossil fuel industry, and a plan that will actually do it” and argued that “I’m unique in offering that to the Democratic Party. And I am willing to have that debate with any Democrat who falls short. And frankly I think there’s a lot of people who fall short in this.”

Michael E. Mann, a climatologist and geophysicist who is currently director of the Earth System Science Center at Pennsylvania State University, told Salon by email in May that he believed America’s addiction to fossil fuels was causing the climate change crisis.

"In George W. Bush’s own words, we are 'addicted to fossil fuels,'" Mann told Salon. "Carrying the metaphor one step further, fossil fuel interests and the politicians and front groups who do their bidding are the drug pushers, while we are the victims. Let’s point the finger at those who are to blame."