“In Miller’s case, what was once just suspect — or at most thought to be implicit — is now explicit" 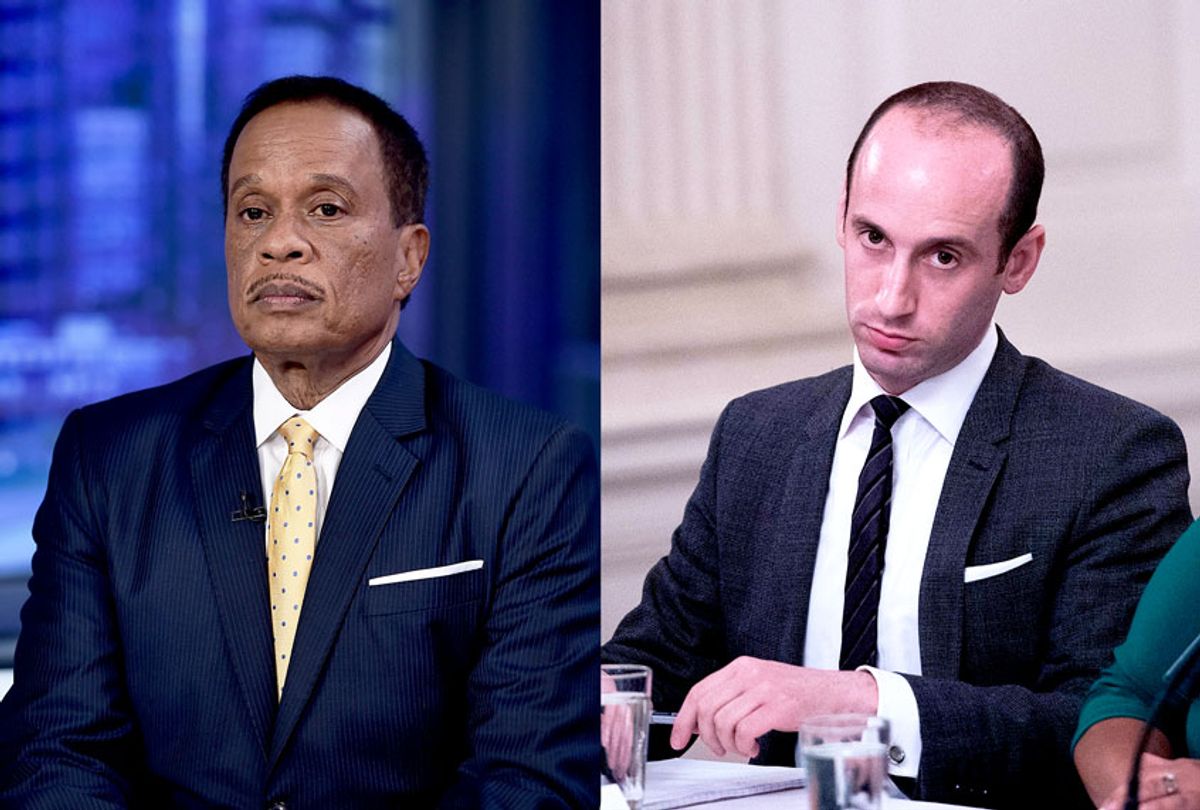 After taking a swipe at “the PC police, slimy lies and race-baiting” — in reference to his own firing from NPR after he made controversial remarks about Muslims — the Fox News personality wrote in The Hill that Miller’s case was "different.” (Williams courted controversy in 2010 after he told then-Fox News host Bill O’Reilly that “when I get on the plane, I got to tell you, if I see people who are in Muslim garb, and I think, 'You know, they are identifying themselves first and foremost as Muslims,' I get worried.”)

Miller, Williams argued, has been a leading figure behind most of Trump’s most controversial immigration policies — “from separating families to caging children to banning Muslims” — and as a result has been accused of racism. Recently leaked emails showing Miller promoting white nationalism and anti-immigrant rhetoric through the far-right news outlet Breitbart prove that accusation had merit, according to Williams.

“So, this is not about ‘identity politics,’” Williams wrote. “It can’t be quickly dismissed by the far-right as the excesses of ‘snowflakes,’ who can’t handle policy arguments without playing the race card. And this is not about ‘cancel culture,’ the over-reaction to a slip of the tongue, calling out offensive language by a comedian or a commentator.”

He added, “In Miller’s case, what was once just suspect — or at most thought to be implicit — is now explicit.”

Williams then called for Miller to be fired, arguing that it would push back against the Republican Party becoming “the angry face of one race – whites” and avoid normalizing overt racism.

“If Trump retains Miller, he will have removed the last shreds of benefit of the doubt: He is either himself a racist or someone who gives aid and comfort to avowed racists,” Williams wrote.

After reviewing how most Americans reject both Trump’s racial politics and immigration policy proposals, Williams added that “Trump’s anti-immigrant policies make no sense as politics. They only make sense as evidence of Miller’s influence on Trump.”

The Fox News analyst concluded by pointing out that 107 House Democrats and more than 20 Senate Democrats who have called for Miller’s firing. “The only question now is: Where are Republican voices demanding Miller’s firing?” he asked.

The White House pushed back against the calls for Miller to resign last month by referring to the allegations against him as anti-Semitic. One White House official told Axios that “this is clearly a form of anti-Semitism to levy these attacks against a Jewish staffer.”

White House press secretary Stephanie Grisham similarly told The Washington Post that the Southern Poverty Law Center, which published a report last month revealing Miller’s emails, was an “utterly-discredited, long-debunked far-left smear organization.” Grisham’s comment ignored the fact that the SPLC received those emails, because they were given to the organization by Katie McHugh, a former Breitbart editor who has denounced the far right after being fired from the organization in 2017 for posting anti-Muslim tweets.