Pelosi said Trump's "wrongdoing strikes at the very heart of our Constitution," leaving lawmakers with "no choice" 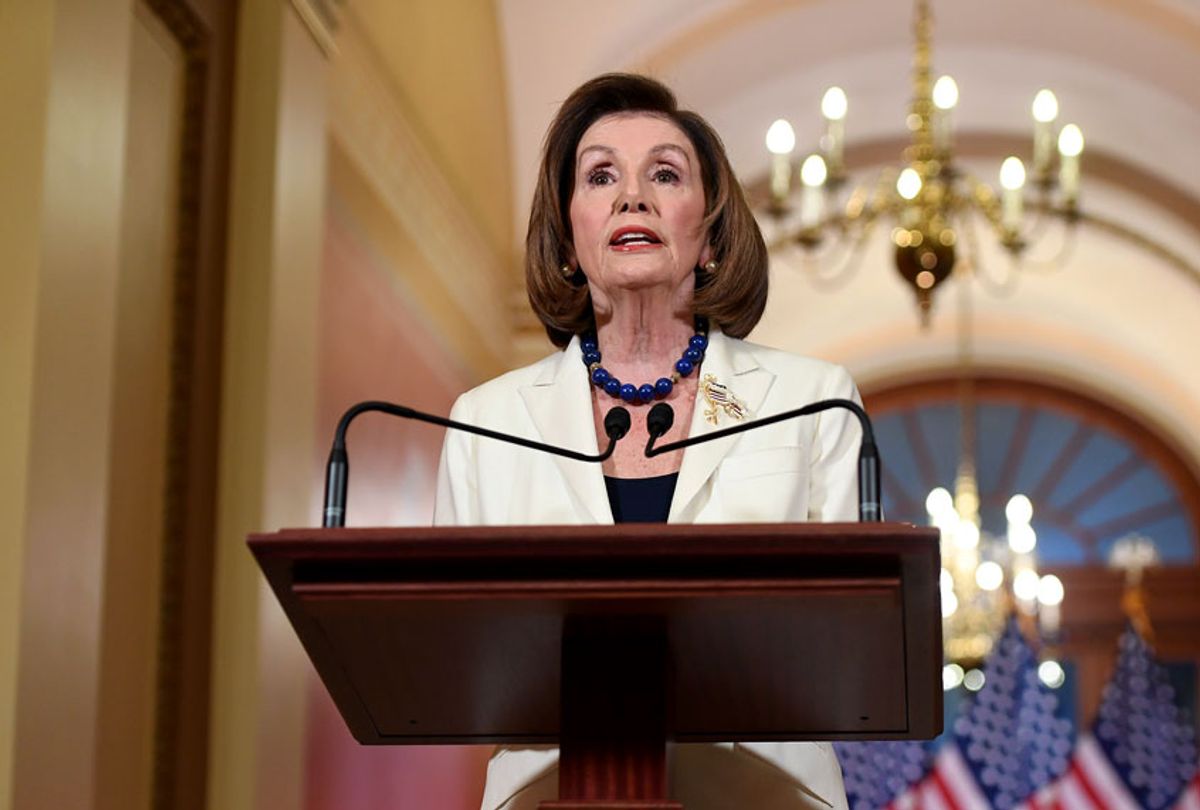 Speaker of the House Nancy Pelosi, D-Calif., announced Thursday that House Democrats will move forward with drafting articles of impeachment against President Donald Trump, saying lawmakers have "no choice but to act."

"His wrongdoing strikes at the very heart of our Constitution," Pelosi said. "The president leaves us no choice but to act, because he is trying to corrupt once again the election for his own benefit."

The House speaker added that Trump "has engaged in abuse of power, undermining our national security and jeopardizing the integrity of our elections."

"Sadly, but with confidence and humility, with allegiance to our founders and our heart full of love for our America, today I am asking our chairmen to proceed with articles of impeachment," Pelosi continued. (The chairs of the House Judiciary, Foreign Affairs, Intelligence and Oversight and Reform Committees have been at the helm of the inquiry.)

White House press secretary Stephanie Grisham responded to Pelosi's announcement on Twitter, declaring that the Democrats "should be ashamed." The White House "look(s) forward to a fair trial in the Senate," she added.

Trump blasted the inquiry earlier Wednesday on Twitter, alleging that Democrats have "gone crazy" and that they have "no Impeachment case." He urged the House to impeach him "fast" so the process can move to the Republican-led Senate, where he claims there will be a "fair trial."

At the heart of the inquiry are allegations that Trump attempted to leverage a White House meeting and millions in military aid, sought by Ukraine in the face of Russian aggression, to pressure Ukrainian President Volodymyr Zelensky to investigate former Vice President Joe Biden and his son, Hunter, as well as an unsubstantiated theory that the Ukrainian government had conspired with Democrats to interfere in the 2016 presidential election.

Pelosi's remarks came a day after the House Judiciary Committee, which has jurisdiction over drafting articles of impeachment, heard testimony from four constitutional scholars about the legal and historical underpinnings of the process. Three law experts called by Democrats said Trump committed impeachable offenses, while one called by Republicans offered the lone dissent.

Also at Wednesday's hearing, the panel's chairman, Rep. Jerry Nadler, D-N.Y., suggested that issues in former special counsel Robert Mueller's report into Russian interference in the 2016 election could be included in eventual articles of impeachment. Nadler argued that Trump had obstructed justice both during Mueller's investigation and the House's impeachment inquiry.

Mueller concluded that Trump did not illegally conspire with Moscow to influence the outcome of the 2016 election. But he declined to say whether Trump had illegally obstructed justice, citing the Justice Department's position that sitting presidents cannot be indicted. However, he detailed at least ten examples of potential obstruction by the president in his report.

Multiple moderates, including freshman lawmakers considered most vulnerable in 2020, have reportedly urged their caucus to steer clear of Mueller's report in their own inquiry into Ukraine. On the other hand, some key Democrats, including Nadler, appear eager to admonish Trump for his misconduct outlined by Mueller. Lawmakers who support expanding impeachment articles to include Trump's actions related to Mueller's probe have argued a sole focus on Ukraine would not fully capture the extent of alleged corruption in the White House.

In his opening statement Wednesday, Nadler said Trump's latest actions showed a "pattern of conduct" seen since his first year in the Oval Office.

"When his own Department of Justice tried to uncover the extent to which a foreign government had broken our laws, President Trump took extraordinary and unprecedented steps to obstruct the investigation, including ignoring subpoenas, ordering the creation of false records and publicly attacking and intimidating witnesses," he said. "Then, as now, this administration's level of obstruction is without precedent."