"Lev remembers what you spoke about,” attorney Joseph Bondy wrote as he urged Congress to interview Parnas 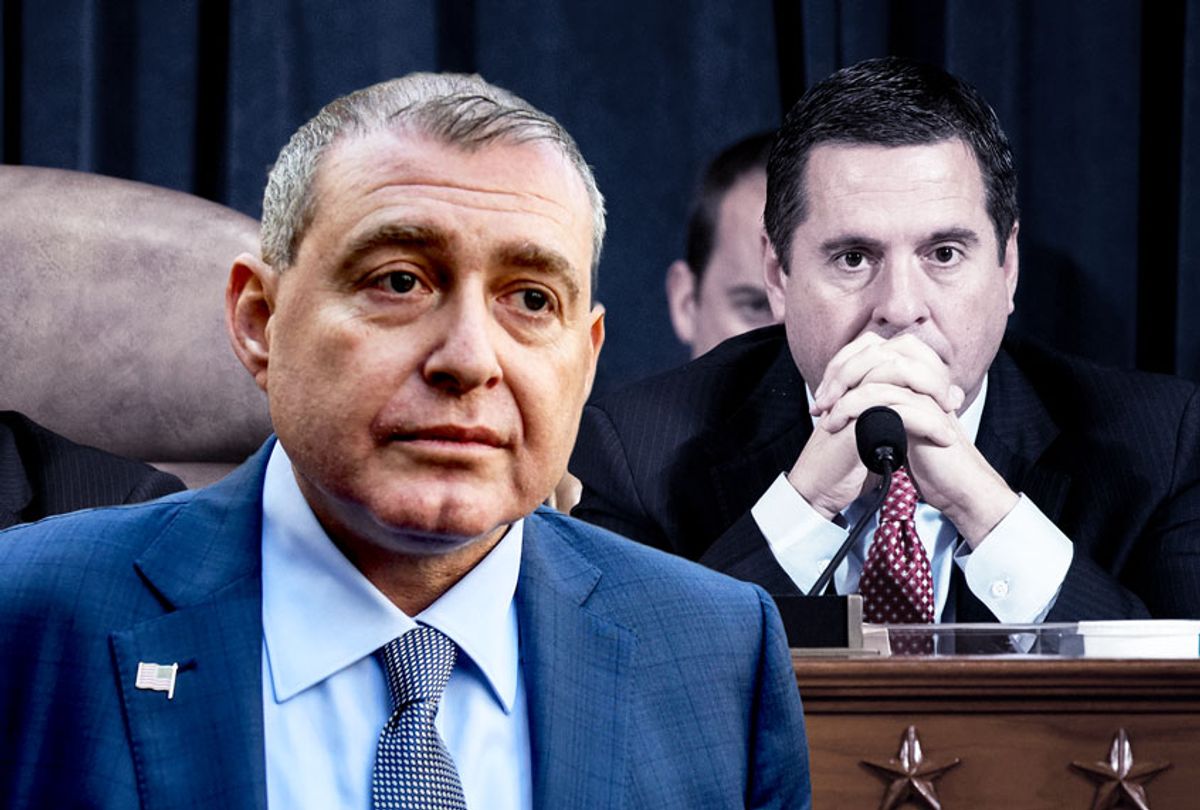 An attorney for indicted Rudy Giuliani associate Lev Parnas warned Rep. Devin Nunes, R-Calif., that “Lev remembers” their phone calls — even if the Intelligence Committee’s top Republican does not.

Phone records obtained from AT&T and released in the Intelligence Committee’s impeachment report revealed four phone calls between Nunes and Parnas on April 12, amid the smear campaign that ousted then-Ukraine Ambassador Marie Yovanovitch, including one which lasted longer than eight minutes. Parnas, who played a key role in Giuliani’s hunt for damaging information on former Vice President Joe Biden, was later indicted on campaign finance charges. Prosecutors have said he is still under investigation for more crimes.

However, Nunes now claims that he cannot not recall speaking with Parnas.

"You know, it's possible, but I haven't gone through all my phone records,” Nunes told Fox News host Sean Hannity on Tuesday. “I don't really recall that name, but it seems very unlikely that I would be taking calls from random people."

Nunes was pressed about those comments by Fox News host Martha MacCallum on Thursday.

“Just to clear the air, because I want to hear, what did you discuss with Lev Parnas?” MacCallum asked the congressman.

“I don’t even know, because I’ve never met Parnas. And like I filed in federal court — so it’s a great question because many people want to know, including myself,” Nunes said, referring to a $435 million lawsuit he filed against CNN for reporting Parnas’ claim that Nunes met with disgraced former top Ukrainian Prosecutor Viktor Shokin, who is at the heart of Giuliani’s and President Donald Trump’s baseless allegations against Biden.

“You never had any phone conversation with him?” MacCallum pressed.

“We have not been able to confirm that yet,” Nunes responded.

“You don’t think you would remember if you had a conversation?” MacCallum asked.

“You have to remember: We are the House Intelligence Committee Oversight Committee, so we get calls from people every day,” Nunes said. “I get them from all over the world, allies and people that aren’t our allies. In this case, I just don’t know.”

“So you didn’t have an opportunity to look at the phone numbers that are on there at all?” MacCallum asked.

“We are sitting with thousands of pages of metadata of numbers,” Nunes replied. “So somehow they went through there and found my cell number a few times. And what’s even worse is . . . they selectively used my numbers in order to build on their conspiracy theory that somehow myself and my two staffers — former staffer, one current staffer — that they don’t like, because we embarrassed them with the Russia hoax. And that’s what this is all about — it’s about retribution.”

“Hey @Devin Nunes -- Lev remembers what you spoke about,” he wrote, adding the hashtag “#LetLevSpeak.”

In another tweet, Bondy shared an image of the call logs, writing to Nunes: “You should have recused yourself at the outset” of the Intelligence Committee’s impeachment hearings.

Bondy has urged Congress to schedule an interview with his client in the impeachment probe, vowing that Parnas would provide investigators “hard evidence” of Trump administration wrongdoing.

Parnas’ attorneys also told The Daily Beast that Parnas had been in contact with Nunes long before the calls listed in the impeachment report. Parnas helped Nunes arrange overseas meetings in 2018 while Nunes was pursuing a probe aimed at discrediting former special counsel Bob Mueller’s investigation, the attorneys said.

Bondy later told CNN that “Parnas learned from former Ukrainian Prosecutor General Victor Shokin that Nunes had met with Shokin in Vienna last December.” Shokin is the prosecutor who Biden pushed for Ukraine to fire after multiple western nations complained he was not pursuing corruption investigations.

"Nunes had told Shokin of the urgent need to launch investigations into Burisma, Joe and Hunter Biden, and any purported Ukrainian interference in the 2016 election," Bondy told the network.

Nunes filed a defamation lawsuit against CNN over the report. He told Hannity on Tuesday that he “didn’t meet with this guy Shokin." CNN “shouldn’t be listening to somebody who’s been indicted,” Nunes said, even though call logs show that he was in contact with the now-indicted Parnas.

It is unclear if there is still a chance that Parnas will be interviewed now that the House is moving forward with articles of impeachment against the president.

Bondy asked a judge on Monday to allow him to turn over phones and electronic devices obtained by federal investigators to Congress in compliance with the House subpoena issued to his client in the impeachment probe. The Department of Justice’s prosecutor said he would not oppose the materials from being turned over to Congress.

Rep. Steny Hoyer, D-Md., the No. 2 Democrat in the House, said there would be discussions over whether to discipline Nunes over the “serious questions” raised by the phone logs. House Armed Services Committee Chairman Rep. Adam Smith, D-Wash., said an ethics investigation into Nunes’ actions was “quite likely.”