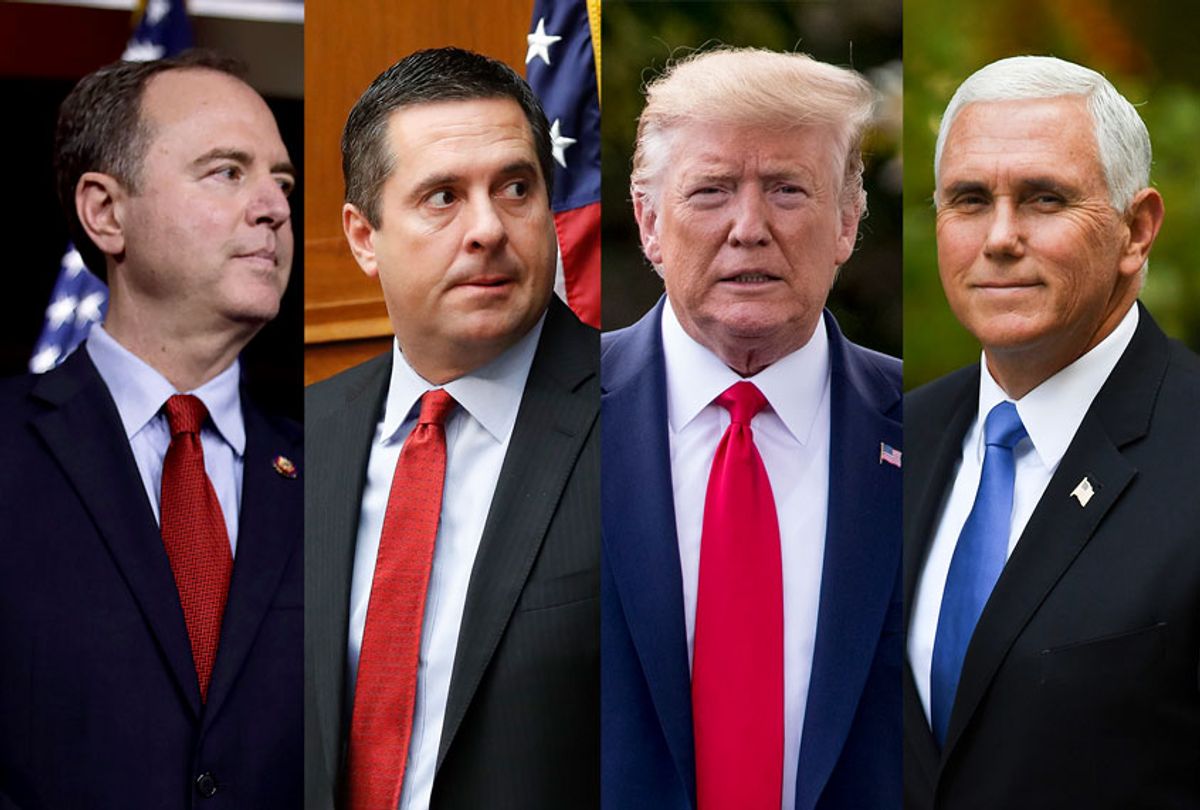 The committee, led by Chairman Adam Schiff, D-Calif., concluded that Trump “placed his own personal and political interests above the national interests of the United States.” The report also implicates Vice President Mike Pence and top Cabinet officials as being “either knowledgeable of or active participants” in the scheme. The report also included call records showing that Rep. Devin Nunes, R-Calif., the committee’s top Republican and former chair, had extensive contacts with Trump attorney Rudy Giuliani and his indicted associate, Lev Parnas. The records also showed that Giuliani made repeated phone calls to the White House during key events.

“The impeachment inquiry has found that President Trump, personally and acting through agents … solicited the interference of a foreign government, Ukraine, to benefit his reelection,” the report states. “Trump conditioned official acts on a public announcement by the new Ukrainian President, Volodymyr Zelensky, of politically-motivated investigations. … Trump withheld a White House meeting desperately sought by the Ukrainian President, and critical US military assistance to fight Russian aggression in eastern Ukraine.”

The report said that Trump “engaged in this course of conduct for the benefit of his own reelection.” In doing so, Trump “sought to undermine the integrity of the US presidential election process, and endangered US national security.”

The report called the partial transcript of Trump’s phone call with Zelensky “stark evidence of misconduct.” It went on to add that actions before and after the call show that top administration officials were actively involved in the president’s abuse of power.

The probe determined that the call “was a dramatic crescendo within a months-long campaign driven by President Trump in which senior US officials, including the Vice President, the Secretary of State, the Acting Chief of Staff, the Secretary of Energy, and others were either knowledgeable of or active participants in an effort to extract from a foreign nation the personal political benefits sought by the president.”

The report noted that evidence and witnesses were blocked from the committee by the administration but “the evidence of the President’s misconduct is overwhelming.”

The report also concluded that Trump obstructed the oversight authority of Congress, which could be grounds for a separate article of impeachment.

“Indeed, it would be hard to imagine a stronger or more complete case of obstruction than that demonstrated by the President since the inquiry began,” the report said.

Even after the investigation began, Trump publicly urged Ukraine as well as China to investigate the Bidens.

“By doubling down on his misconduct … President Trump has shown a continued willingness to use the power of his office to seek foreign intervention in our next election,” the report said.

Along with Trump’s pressure on Ukraine, the report details the “ruthless smear campaign” against former Ukraine Ambassador Marie Yovanovitch, which led to her ouster. Trump “tweeted the smears himself just a month before he recalled” Yovanovitch, the report said. “In her place, the President would designate three new agents to spearhead Ukraine policy, political appointees far more willing to engage in an improper ‘domestic political errand’ than an ambassador known for her efforts to fight corruption.”

The report goes on to cite acting White House chief of staff Mick Mulvaney’s admission of a quid pro quo — which Mulvaney later tried to walk back — extensive witness testimony corroborating the report’s assertions about the scheme, and acts of obstruction undertaken by the administration.

“No other President has flouted the Constitution and power of Congress to conduct oversight to this extent,” the report said. “No President has claimed for himself the right to deny the House’s authority to conduct an impeachment proceeding, control the scope of a power exclusively vested in the House, and forbid any and all cooperation from the Executive Branch. Even President Richard Nixon — who obstructed Congress by refusing to turn over key evidence — accepted the authority of Congress to conduct an impeachment inquiry and permitted his aides and advisors to produce documents and testify to Congressional committees.”

“He issued threats, openly discussed possible retaliation, made insinuations about their character and patriotism, and subjected them to mockery and derision — when they deserved the opposite,” the report said, adding that “it is a federal crime to intimidate or seek to intimidate any witness.”

“The damage to our system of checks and balances, and to the balance of power within our three branches of government, will be long-lasting and potentially irrevocable if the president’s ability to stonewall Congress goes unchecked,” the report concluded. “Any future president will feel empowered to resist an investigation into their own wrongdoing, malfeasance, or corruption, and the result will be a nation at far greater risk of all three.”

The report’s extensive end notes include multiple call logs, showing that Giuliani was in frequent touch with the White House’s Office of Management and Budget, which blocked the military aid to Ukraine. Giuliani also made at least three calls to a White House number on April 24, the night Yovanovitch was recalled from her post in Kyiv. The call records also show that Nunes had multiple contacts with Giuliani and Parnas in April, amid the smear campaign against Yovanovitch.

Schiff said at a news conference after the report’s release that he had concerns about his Republican counterpart’s involvement in the scheme.

“It is, I think, deeply concerning that at a time when the president of the U.S. was using the power of his office to dig up dirt on a political rival that there may be evidence that there were members of Congress complicit in that activity,” he said.

Republicans on the committee issued a 123-page preemptive rebuttal, calling the impeachment inquiry “an orchestrated campaign to upend our political system.”

Within moments of the release of the committee report, White House press secretary Stephanie Grisham said “Schiff’s report reads like the ramblings of a basement blogger straining to prove something when there is evidence of nothing.”

The Intelligence Committee will now vote to approve its final report and present the findings to the Judiciary Committee, which is expected to hold hearings as members weigh whether to bring articles of impeachment against the president. The full House of Representatives would then vote on any articles of impeachment. If a majority votes to impeach the president, the Senate will be compelled hold a trial. Two-thirds of all senators present (or 67, assuming no absentees) would have to vote to convict Trump to remove him from office.

Schiff at his news conference issued a warning to Republicans, who have almost universally defended the president.

"To my Republican colleagues,” he said, “they need to consider when we have a Democratic president, are they willing to say to their oversight that the president can simply refuse?"