Eric Holder unloads on William Barr’s “nakedly partisan” defense of Trump: “He is unfit to lead” 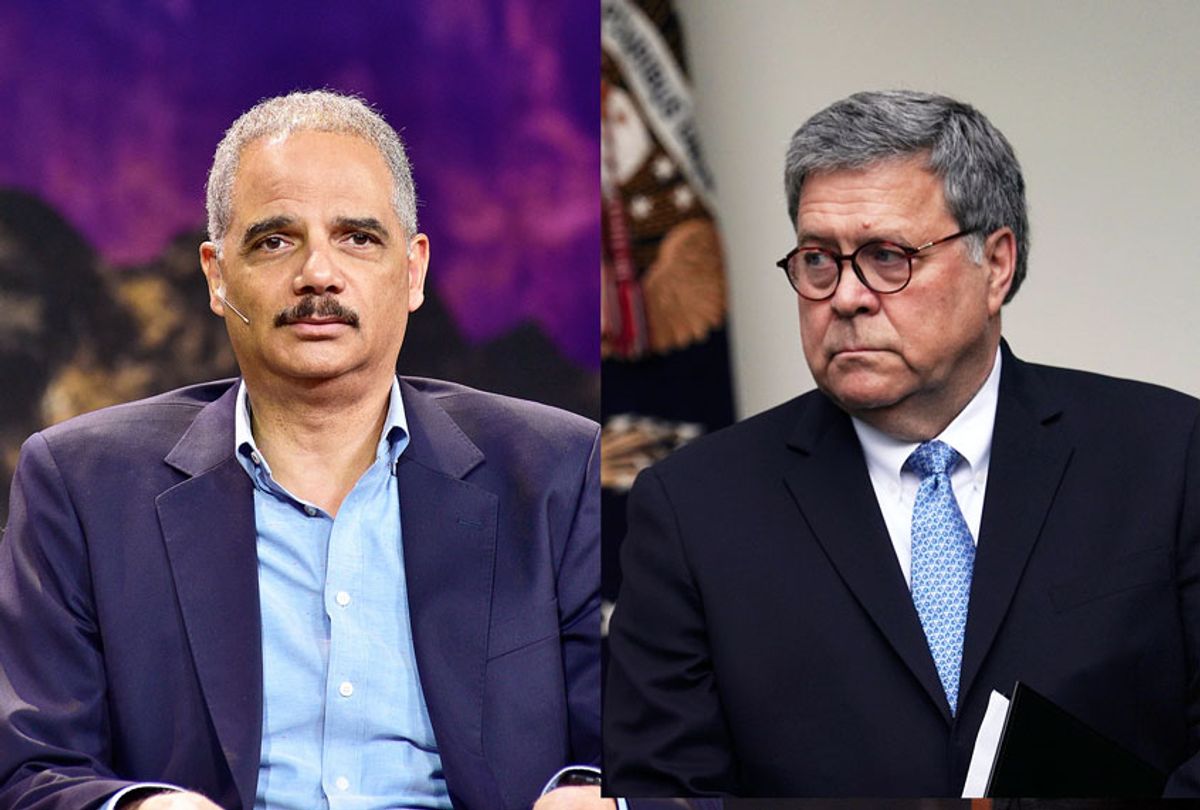 Former Attorney General Eric Holder said that current Attorney General Bill Barr’s “deeply inappropriate” actions and rhetoric demonstrate that he is “unfit to lead the Justice Department” in a new op-ed in The Washington Post.

Barr came under severe criticism this week after he issued a statement disputing the investigation of his own department’s inspector general, which refuted Barr’s claims that the FBI spied on President Donald Trump’s campaign and concluded that the investigation into the campaign’s Russia ties was justified. Barr later claimed that “from a civil liberties standpoint,” the Obama administration posed “the greatest danger to our free system” in the 2016 election — not Russia.

Holder wrote that he was “reluctant to publicly criticize my successors,” but Barr’s recent actions left him no choice.

“Barr has made a series of public statements and taken actions that are so plainly ideological, so nakedly partisan and so deeply inappropriate for America’s chief law enforcement official that they demand a response from someone who held the same office,” he continued.

Holder added that it was “extraordinary” that Barr had claimed, “without offering any evidence,” that the FBI had acted in “bad faith” when it opened the Russia probe.

“As someone who spent six years in the office Barr now occupies, it was infuriating to watch him publicly undermine an independent inspector general report — based on an exhaustive review of the FBI’s conduct — using partisan talking points bearing no resemblance to the facts his own department has uncovered,” Holder wrote.

Holder said he was also “troubled” by a similar statement issued by U.S. attorney John Durham, who was handpicked by Barr to investigate the origins of the Russia probe.

“Good reputations are hard-won in the legal profession, but they are fragile; anyone in Durham’s shoes would do well to remember that in dealing with this administration, many reputations have been irrevocably lost,” Holder wrote. “This is certainly true of Barr, who was until recently a widely respected lawyer.”

Holder added that Barr’s recent speeches were “attempts to vilify the president’s critics” and sound “more like the tactics of an unscrupulous criminal defense lawyer than a U.S. attorney general.”

Barr gave a speech to the Federalist Society last month in which he assailed Trump’s critics.

He accused “the other side” of “the systematic shredding of norms and the undermining of the rule of law,” which Holder said showed that Barr was “a partisan actor — not an impartial law enforcement official.”

Barr also “made the outlandish suggestion that Congress cannot entrust anyone but the president himself to execute the law,” Holder wrote. “This is a stunning declaration not merely of ideology but of loyalty: to the president and his interests. It is also revealing of Barr’s own intent: to serve not at a careful remove from politics, as his office demands, but as an instrument of politics — under the direct ‘control’ of President Trump.”

“Virtually since the moment he took office, though, Barr’s words and actions have been fundamentally inconsistent with his duty to the Constitution. Which is why I now fear that his conduct — running political interference for an increasingly lawless president — will wreak lasting damage,” Holder said. “The American people deserve an attorney general who serves their interests, leads the Justice Department with integrity and can be entrusted to pursue the facts and the law, even — and especially — when they are politically inconvenient and inconsistent with the personal interests of the president who appointed him. William Barr has proved he is incapable of serving as such an attorney general. He is unfit to lead the Justice Department.”

Vanita Gupta, who headed the Justice Department’s civil rights division under Holder, praised her former boss and called his rebuke of Barr a “big deal.”

“Took courage to speak out in this manner about another AG but the circumstances called for it," she tweeted. “I am deeply proud and honored to have worked at DOJ under his leadership.”

“Never been prouder to have worked for him,” agreed former DOJ spokesman Matthew Miller.

Holder accompanied his op-ed with a message to the current employees of the DOJ and the FBI.

“To the men and women of DOJ/FBI: stay strong, keep the faith, be true to the oath you have sworn, be secure in the knowledge that you have the support of the American people,” he wrote on Twitter. “The era of Trump and Barr will pass-their slander, insults and lies will end. We respect & believe in you.”