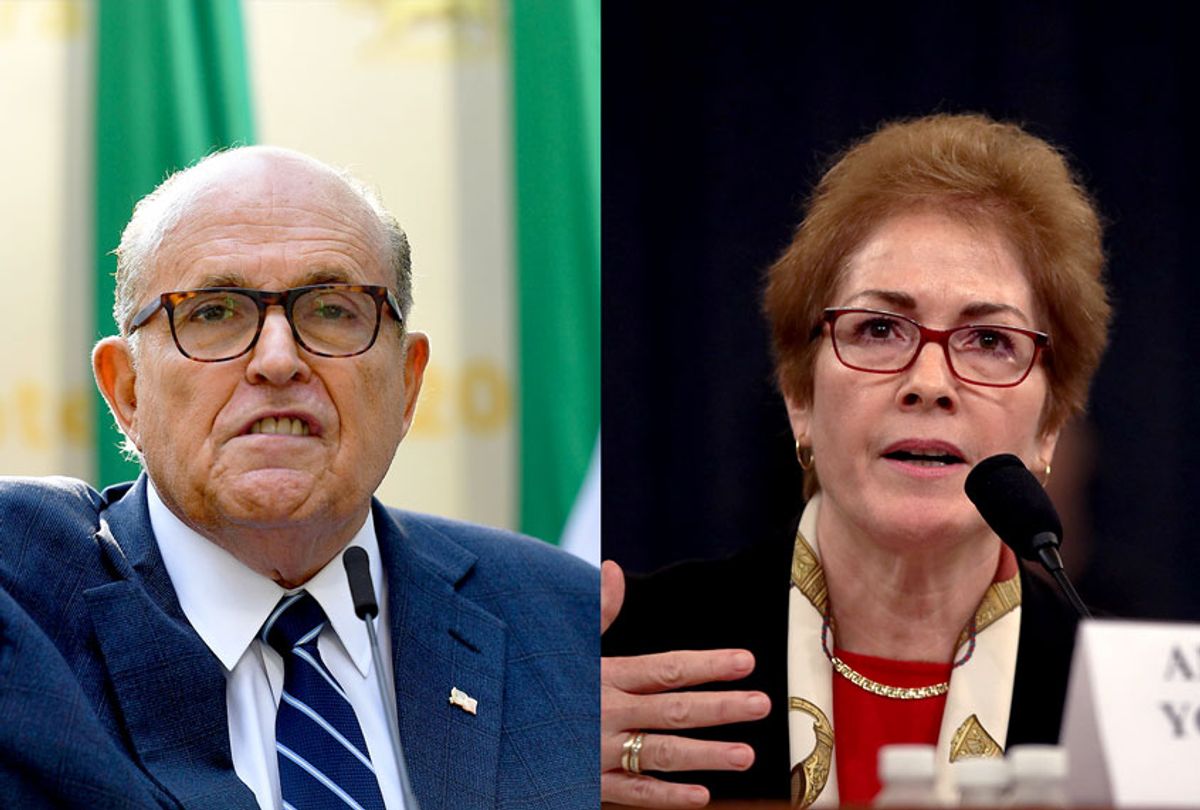 Trump attorney Rudy Giuliani admitted that he needed former Ukraine Ambassador Marie Yovanovitch “out of the way” in his scheme to find information in Ukraine that could aid President Trump’s re-election.

Giuliani, who publicly bragged about seeking damaging information on Trump’s political rivals in Ukraine as early as May, admitted to The New Yorker that he wanted Yovanovitch removed from her post to advance his plan to get Ukraine to publicly announce an investigation into the Bidens. Furthermore, the president's personal lawyer made this admission even after his scheme led to the House Judiciary Committee approving articles of impeachment against his client.

“I believed that I needed Yovanovitch out of the way,” Giuliani told the outlet. “She was going to make the investigations difficult for everybody.

Yovanovitch testified to Congress earlier this year that she was ousted after a baseless smear campaign led by Giuliani. Multiple State Department officials testified that Yovanovitch was the victim of lies fed to Giuliani and his associates by Ukrainian officials who had an ax to grind with the ambassador’s tough-on-corruption approach.

Yovanovitch directed Ukrainian consulate employees to block a visa Giuliani had sought for former Ukrainian Prosecutor General Viktor Shokin, the prosecutor that Giuliani has alleged former Vice President Joe Biden had fired for investigating his son, Hunter. (There is no truth to this claim. Shokin never investigated Biden and was forced out over allegations that he was corrupt.)

“I was kind of pissed off at her at that point,” Giuliani told the outlet.

The New Yorker reported Giuliani’s comments as part of a lengthy profile of former Ukrainian Prosecutor General Yuriy Lutsenko, the man who fed these false claims to Giuliani while “seeking to bolster his reputation.”

Lev Parnas, an indicted associate of Giuliani who helped connect the Trump attorney with Ukrainian officials, told the outlet that Lutsenko jumped at the chance to provide Giuliani with information that could damage Yovanovitch and the Bidens. “Lutsenko came in with guns blazing,” Parnas said.

Giuliani confirmed to the outlet that he used information from Lutsenko to compile a dossier on the Bidens and Yovanovitch which he later fed to John Solomon, then a reporter for The Hill. Solomon helped push the narrative based on claims that Lutsenko has since retracted. The Hill says it is now reviewing the accuracy of Solomon's reporting.

Lutsenko told The New Yorker that he was “aware of Giuliani’s appetite for anything that might embarrass the Bidens” and fed him “an assortment of seemingly tantalizing but ultimately insubstantial data points.”

Lutsenko told The New Yorker that he initially saw the relationship with Giuliani as a “win-win.” But by May, “each man felt that he had been led on by the other,” according to the outlet. Lutsenko failed to announce an investigation into the Bidens before retracting his claims, while Giuliani failed to help him arrange a meeting with Attorney General Bill Barr.

“I was wondering what kind of game he was playing. I felt like we were getting scammed,” Giuliani admitted to the outlet.

After their relationship fell apart, Lutsenko came forward in a Bloomberg News interview to pour cold water over Giuliani’s claims.

“Hunter Biden did not violate any Ukrainian laws — at least as of now, we do not see any wrongdoing. A company can pay however much it wants to its board,” he told the outlet in May.

Shortly after, the FBI arrested Parnas and associate Igor Fruman. Giuliani is now under scrutiny from the FBI as well.

Lutsenko told The New Yorker he went to Bloomberg News to show that he was “not Giuliani’s marionette.” Giuliani was furious, according to the report.

Before Lutsenko came forward, “it was going along fine,” Giuliani told The New Yorker. But Lutsenko’s admission “undermined everything.”

But not long after their relationship fell apart, Lutsenko was recruited by Giuliani to once again reignite the smear campaign against Yovanovitch in an interview with the pro-Trump conservative outlet One America News Network. Lutsenko claimed that Yovanovitch had lied under oath, which drew a retweet from Trump himself.

The New Yorker’s Adam Entous asked Lutsenko why he had rekindled his association with Giuliani, “whose competence he had previously questioned.”

“I have no other way to protect my reputation,” he replied. “Why not?”

The OANN interview, part of a larger presentation of information Giuliani gathered during a trip to Ukraine earlier this month, was panned by The Washington Post’s Aaron Blake as a “stunning piece of propaganda” presenting a “mélange of innuendo, slanted language, Trumpian talking points and dramatic music, without any real pretense.”

“He really needs a defense lawyer to tell him to stop,” she wrote.

“We cannot take the risk that the next election will be corrupted through foreign interference solicited by the president, which he is clearly trying to do,” Nadler said. “It goes to the heart of our democracy.”

“So this misconduct goes on, the threat to our election integrity coming up goes on,” Schiff said.  “It's a clear and present danger … and not something that we can turn away from simply because the Republicans in the House refuse to do their duty, and [are] continuing to put the person of the president above their personal obligation.”