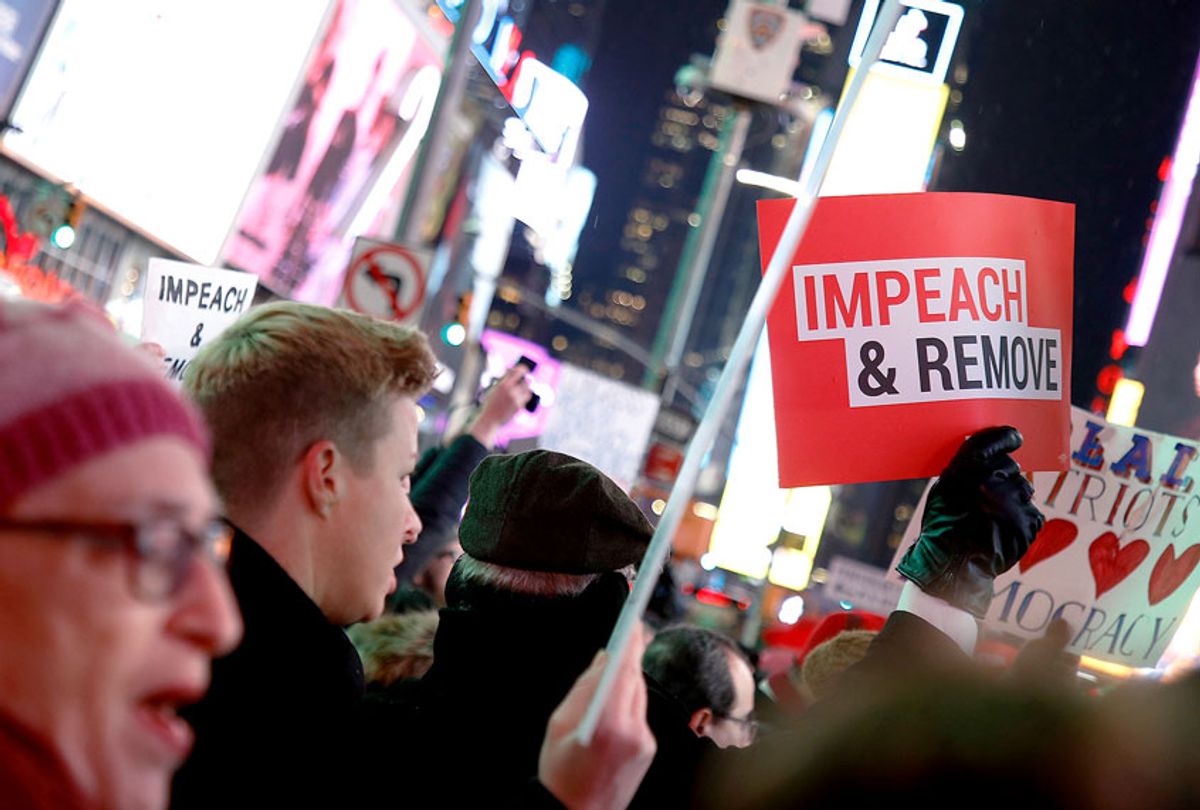 Demonstrators join national impeachment demonstrations to demand an end to Donald Trump's presidency named "Nobody Is Above The Law" Rally - NYC at Times Square on December 17, 2019 in New York City. (John Lamparski/Getty Images for MoveOn.org)
--

Pro-impeachment protests swept America on Tuesday night in the hours final hours leading up to a historic vote in the House of Representatives on two articles of impeachment against President Donald Trump.

The protests spanned from the Boston Common and the Center City of Philadelphia down to the French Quarter in New Orleans, according to The New York Times. The demonstrations were organized by a coalition of liberal groups, including MoveOn.org and Indivisible.

One protest in Madison, Wis., was so cold that the newspaper described the dedicated crowd of roughly 200 people as having “stamped their feet to revive frozen toes in 20-degree weather while listening to the Raging Grannies, a political activist singing group.”

While the protesters repeated numerous chants across the nation, a common theme united them: Trump is not above the law, and he should be removed from the White House.

In Times Square, the protesters shouted, “Tell me who's above the law / Nobody is above the law!" Meanwhile in St. Paul, Minn., a crowd gathered and altered the lyrics of “We Wish You a Merry Christmas” to say, “We wish you would leave the White House / Some time by New Year.”

A protester in Atlanta told CNN, “Donald Trump has gotten away with multiple crimes, and the Republican-controlled Senate is not going to do anything about it. This represents an existential threat to this country. This is probably the biggest threat to our democracy, certainly in my lifetime."

Shannon Stagman of Empire State Indivisible, which helped organize the New York rally, told Reuters that “it’s important to come out and say we recognize that crimes were committed here — that this president has abused his power and we’re not OK with letting that slide.”

During a protest in Concord, Mass., The Guardian reports, placards quoted one of Massachusetts’ most famous Founding Fathers, John Adams: “Facts Are Stubborn Things.” The site also reported a Revolutionary War-era theme at the Times Square protest, where a giant banner was unfurled with Article II, Section Four of the Constitution, which lays out the grounds for impeachment.

Reggie Hubbard, congressional liaison and Washington strategist for the progressive group MoveOn, told The Washington Post the purpose of the protests was to let Congress know that a wide range of people want the president to be impeached.

“Our goal is to show them the diversity that exists in the support for impeachment. We want them to look out across the country and realize this isn’t partisan,” Hubbard said. "The only ones making it partisan are congressional Republicans."

Though the spirit of the pro-impeachment rallies were passionate, NBC News reported that turnout was more modest than seen at other progressive protests of late.

“For all the passion among activists, the gatherings were notably smaller than many of the other recent mass protests that began with the millions-strong Women's Marches the day after Trump's inaugural and have ranged over subjects from climate change to gun control,” NBC News reported.