“I’m literally the only person on this stage who’s not a millionaire or a billionaire,” Buttigieg said in response 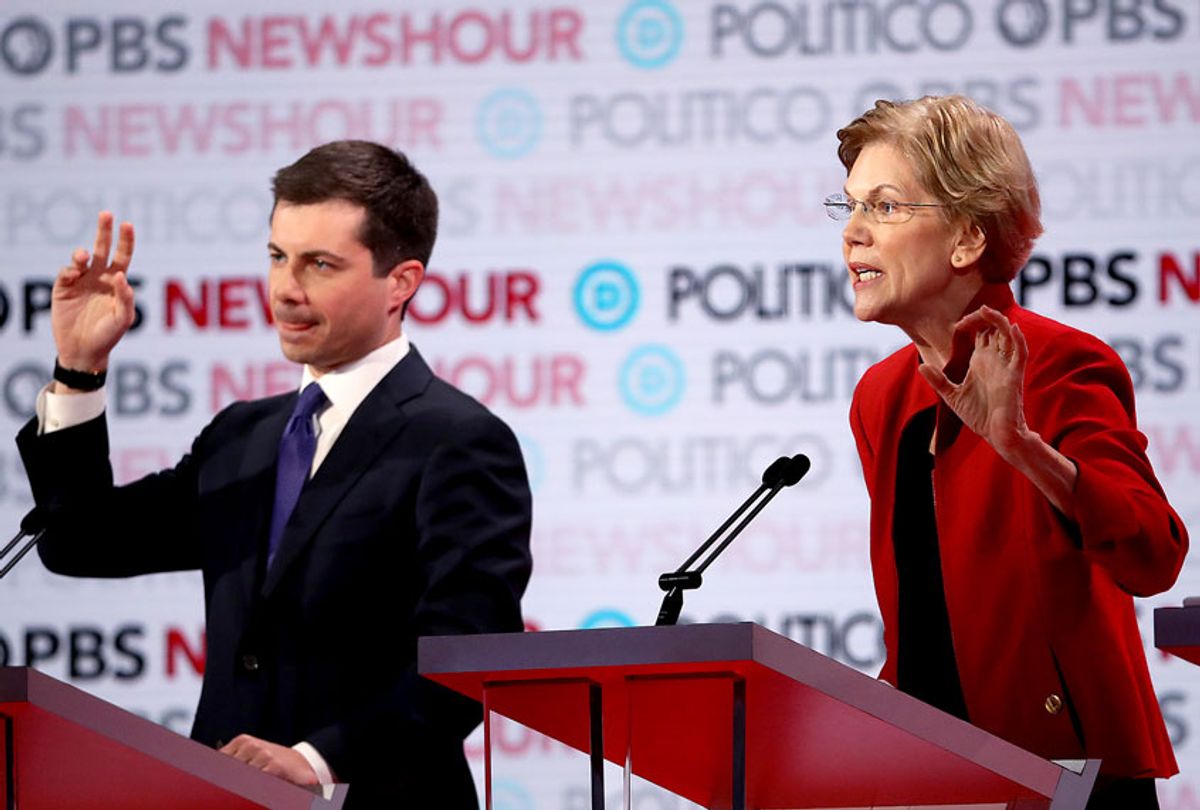 Warren, who has sworn off big-dollar fundraisers, called Buttigieg out for holding a lavish fundraiser at a Napa, California “wine cave” earlier this month. The event featured “a chandelier with 1,500 Swarovski crystals, an onyx banquet table to reflect its luminescence and bottles of cabernet sauvignon that sell for as much as $900,” according to The Associated Press.

Buttigieg countered by noting that he had the lowest net worth of any candidate on the stage.

“I’m literally the only person on this stage who’s not a millionaire or a billionaire,” Buttigieg said. “This is the problem with issuing purity tests you cannot yourself pass. I pledge never to be in the company of a progressive Democratic donor, I couldn’t be up here. Senator, your net worth is 100 times mine.”

Buttigieg asked Warren if a donation from her would “pollute my campaign” because it “came from a wealthy person.”

“We need support from everybody who is committed to helping us defeat Donald Trump,” he added.

Warren fired back by drawing a contrast between her and Buttigieg.

“I do not sell access to my time,” Warren said. “I don’t do call time with millionaires and billionaires. I don’t meet behind closed doors with big-dollar donors . . . I’ve said to anyone who wants to donate to me, 'If you want to donate to me, that’s fine. But don’t come around later expecting to be named ambassador.' Because that’s what goes on at these high dollar fundraisers."

Buttigieg noted that Warren had transferred millions of dollars she raised from big-dollar fundraisers for her Senate race into her presidential campaign.

“Your presidential campaign right now, as we speak, is funded in part by money you transferred having raised it at those exact same big ticket fundraisers you now denounce,” he said. “Did it corrupt you, senator? Of course, not.”

Sen. Amy Klobuchar, D-Minn., also chimed in on the discussion.

“I did not come here to listen to this argument. I came here to make a case for progress, and I have never even been to a wine cave,” Klobuchar said. “I have been to the wind cave in South Dakota, which I suggest you go to.”

Entrepreneur Andrew Yang brought up his "Democracy Dollars" proposal. If everyone could have $100 in publicly-funded money to donate to campaigns, candidates “wouldn’t have to go shake the money tree in the money cave.”

Sen. Bernie Sanders, I-Vt., used the discussion to reiterate his call that “we need to get money out of politics,” adding that “we should run our campaigns on that basis.”

“My good friend Joe [Biden] has received contributions from 44 billionaires,” he pointed out. “Pete, on the other hand, you only got 39 billionaires contributing. I know you’re an energetic guy and a competitive guy, so see if you can take on Joe on that issue.”

Buttigieg, who has risen up the polls in Iowa and New Hampshire, was a frequent target of the other candidates at Thursday's debate.

Klobuchar accused Buttigieg of mocking "the hundreds of years of experience on the stage” at a previous debate and listed her accomplishments and those of the other candidates.

Buttigieg in turn accused Klobuchar of discounting his time in the U.S. Navy Reserve.

"That is my experience, and it may not be the same as yours, but it counts, senator," he said. "It counts."

"I certainly respect your military experience," Klobuchar replied. "That's not what this is about. This is about choosing a president . . . And the point is, we should have someone heading up this ticket that has actually won and been able to show they can gather the support that you talk about — moderate Republicans and independents, as well as a fired-up Democratic base — and not just done it once."

Buttigieg pointed out that he had won re-election as mayor as a “gay dude in Mike Pence’s Indiana.”

"If you had won in Indiana that would be one thing," she said before referring to his failed bid for state treasurer. "You tried, and you lost by 20 points. I'm sorry, that's just a fact."