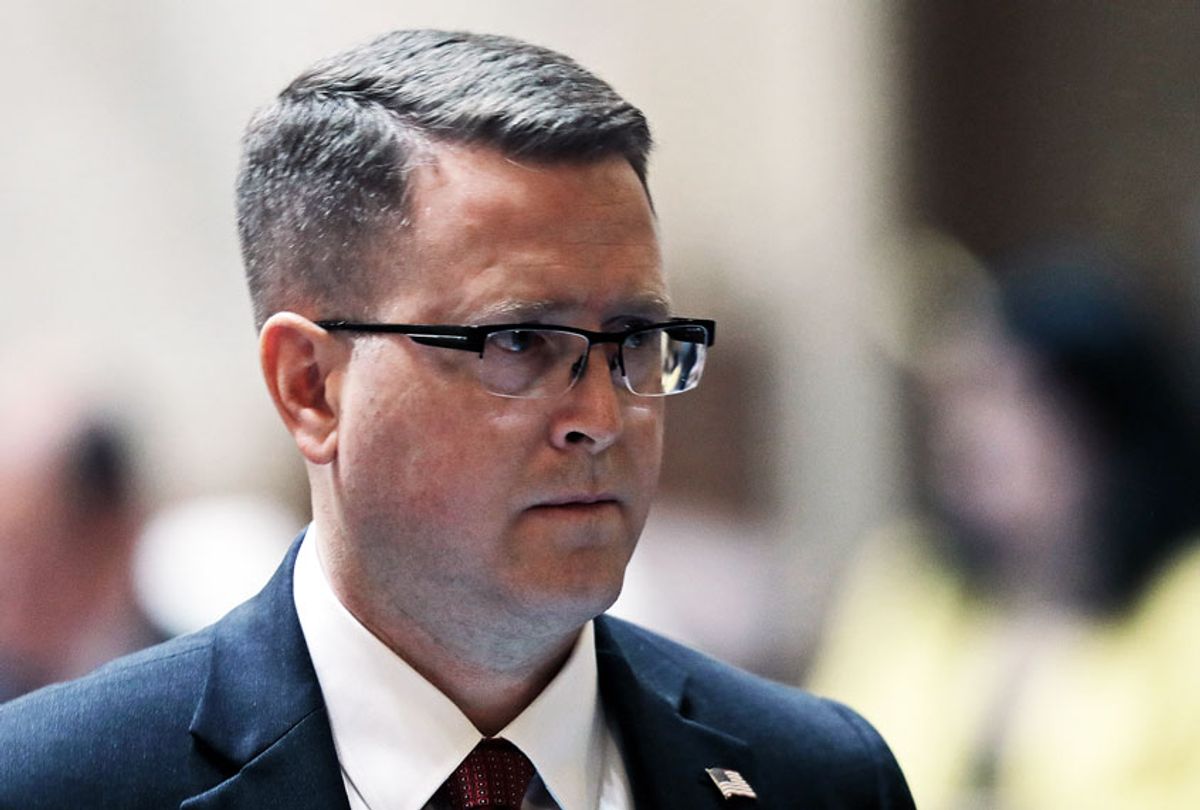 Washington state Rep. Matt Shea, a Republican, “participated in an act of domestic terrorism” when he took part in the armed Bundy militia takeover of the Oregon Malheur National Wildlife Refuge in 2016, according to a report issued by the Washington state House and referred to the FBI.

The 108-page report said that Shea began working with militia leader Ammon Bundy in November 2015 on the “planning and preparation” of the six-week takeover, which saw dozens of armed supporters descend on the rural refuge in remote eastern Oregon. The standoff ended with dozens of arrests and the fatal FBI shooting of militia member Robert LaVoy Finicum, who was killed while trying to evade authorities.

Shea created a military-style plan for the takeover and used his status as a lawmaker to meet with law enforcement as he “gathered intelligence” before meeting with Bundy and the armed protesters, according to the report. Two other Republicans — former state Rep. Graham Hunt and former GOP lands commissioner nominee Steve McLaughlin — were also part of the planning of the occupation, the report said.

Shea had claimed to a House ethics investigator that he merely traveled to the refuge on a “fact-finding mission.” But after the refuge ended and Finicum was shot, Shea wrote on Facebook, "After much prayer, I'm afraid violence might be necessary to take our country back."

The report said that Shea, who was elected in 2008 and hosts a weekly show on the American Christian Network, was also involved in the standoff with FBI agents at the Bundy ranch in Nevada in 2014 and multiple other armed conflicts.

Shea was associated with multiple armed militias and used his prominence to promote armed conflicts against authorities, the report said, detailing that “Representative Shea, as a leader in the Patriot Movement, planned, engaged in and promoted a total of three armed conflicts of political violence against the United States Government in three states outside the state of Washington over a three-year period. In one conflict Representative Shea led covert strategic pre-planning in advance of the conflict.”

Shea helped escalate the 2014 conflict at the Bundy ranch in a post urging “patriots” from all over the country to travel to the ranch. There were about 100 protesters at the ranch when he wrote the blog post, but the number swelled to 1,500 armed protesters after the post. Shea then traveled to the ranch, where he stayed for three days.

Shea also distributed documents with guidelines on fighting a “holy war” and used his radio show to push his far-right views, the report said. Shea represents "a present and growing threat of risk to others through political violence,” the report added.

Shea’s ties to the armed militias were detailed in the Oregon Public Broadcasting special “Bundyville: The Remnant,” as well as reports from the Spokane Spokesman-Review, the Inlander and the Guardian.

After the report was issued, Republican House Minority Leader Rep. J.T. Wilcox announced that Shea “has been suspended from any role in the House Republican Caucus.”

“He should resign,” Wilcox tweeted. “He cannot use House Republican staff, he cannot meet with the caucus, his office will be moved.”

Shea’s name and photo were also removed from the House Republican website, according to The Seattle Times.

“There is no place in [Washington] for hate or violence, especially from those who have been elected by the people,” he tweeted.

Incoming Democratic House Speaker Laurie Jinkins told the Seattle Times that the report has been forwarded to the FBI and the U.S. attorney’s office.

“This is about a state lawmaker who, according to the investigative findings, engaged in an act of domestic terrorism rather than choosing political or legal avenues to change laws and policies he disagrees with,” Jinkins said. “This is why we believe formal action needs to be taken that sends a clear message upholding the values of a free and democratic society, and supports the safety of all Washingtonians.”

Ozzie Knezovich, the Republican sheriff of Spokane County, said that Shea should be prosecuted.

“I believe there’s enough to charge Shea with domestic terrorism, if not treason,” he told KHQ-TV.

But Shea vowed to stay and fight the allegations against him. Shea said that his case is not unlike the “sham investigation” into President Trump, which he said was an attempt to “disarm and destroy” the country.

Shea later issued a statement alleging that the investigation improperly collected “lawful communications between a member of the House and citizens of this country.”

In an interview with the conspiracy theory repository Infowars earlier this month, Shea called the investigation a “Marxist smear campaign” and “political warfare according to a Maoist insurgency model.”

Shea complained that he had “not been provided a meaningful opportunity to respond” but the Seattle Times noted that the report showed that Shea “declined to be interviewed, despite repeated attempts from investigators.”