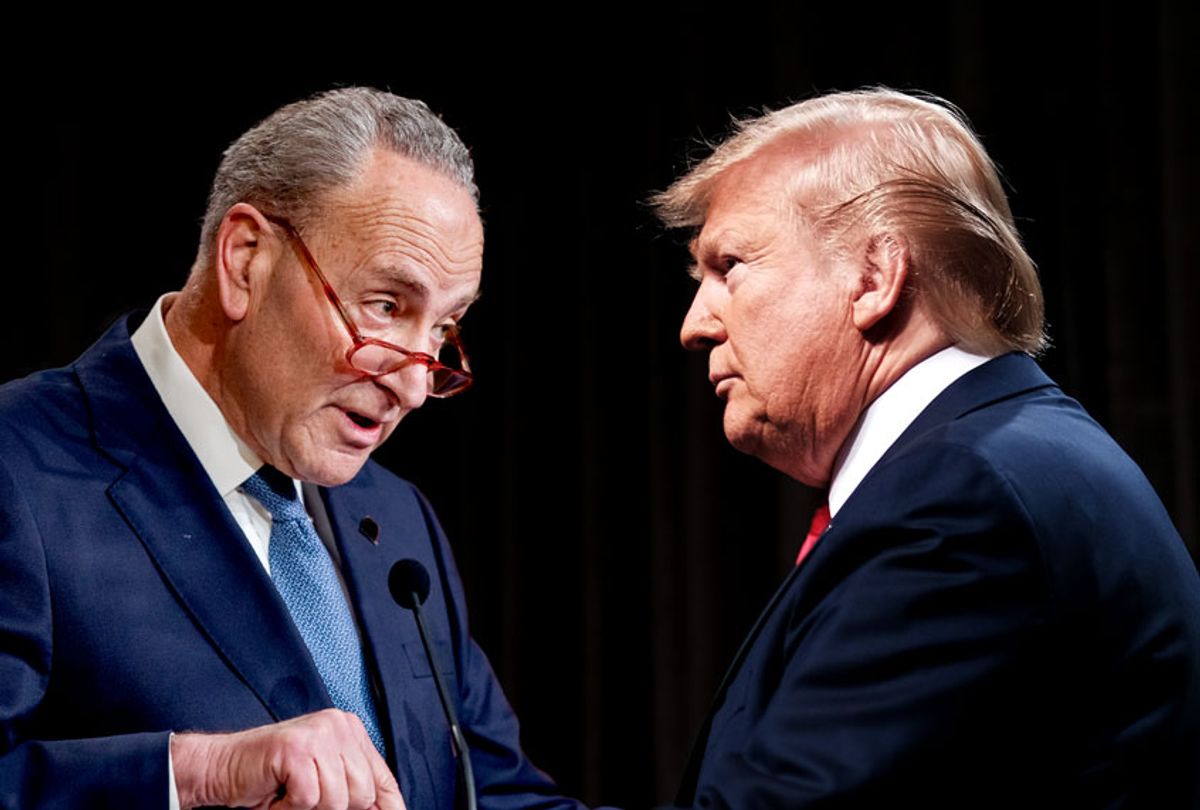 Democrats renewed their calls for the Senate to call new witnesses at President Donald Trump’s impeachment trial after emails obtained by the Center for Public Integrity showed that the White House directed a freeze on military aid to Ukraine about 90 minutes after Trump’s July 25 phone call with Ukrainian President Volodymyr Zelensky.

Emails obtained by the government watchdog group through a Freedom of Information Act request show that Mike Duffey, an official at the Office of Management and Budget, directed the Defense Department to “hold off” on military aid to Ukraine at 11:04 a.m., less than two hours after Trump’s conversation with Zelensky on July 25.

"Based on guidance I have received and in light of the Administration's plan to review assistance to Ukraine, including the Ukraine Security Assistance Initiative, please hold off on any additional DoD obligations of these funds, pending direction from that process," Duffey said in the email.

The email also shows that Duffey asked other officials to keep his request quiet.

“Given the sensitive nature of the request, I appreciate your keeping that information closely held to those who need to know to execute the direction,” he added in the email to Pentagon official Elaine McCusker and others.

Duffey suggested in one of the emails that Trump had begun asking about the military aid after seeing a headline about it in the Washington Examiner, a conservative news outlet, about a week earlier.

The emails also show Pentagon officials’ alarm that the freeze was potentially illegal. OMB official Mark Sandy later testified to Congress that two OMB officials had quit in protest of the freeze.

The aid was eventually released in September, after the White House learned of a whistleblower complaint detailing Trump’s efforts to pressure Zelensky into investigating his political rivals and the subsequent cover-up of the call.

On Sept. 11, Duffey emailed McCusker again to let her know that OMB would be releasing the aid.

“Copy,” she replied. “What happened?”

The first line of Duffey’s response has been redacted in the released emails. “Glad to have this behind us,” he wrote after the redacted portion.

Republicans were quick to dismiss the emails as they prepare for a speedy acquittal of Trump, if and when House Speaker Nancy Pelosi sends the articles of impeachment to the Senate.

“The president was concerned about the — whether or not America’s hard-earned taxpayer dollars should be spent into a country where there has been proven cases of corruption,” Sen. Ron Johnson, R-Wis., told ABC News on Sunday, adding that the emails “don’t shed any new light” on why the aid was withheld.

Democrats say the email demonstrates the need to call additional witnesses during the Senate trial. Senate Majority Leader Mitch McConnell, R-Ky., has rebuffed Democrats’ requests for additional witnesses to appear, prompting Pelosi to withhold the articles of impeachment as leverage in negotiations.

“This email from Michael Duffey — approximately 90 minutes after President Trump’s call with the president of Ukraine — is all the more reason why we need Duffey and others to testify in a Senate trial,” Senate Minority Leader Chuck Schumer, D-N.Y., said on Twitter.

“If there was ever an argument that we need Mr. Duffey to come testify, this is that information. This email is explosive,” he added at a news conference on Sunday. “A top administration official, one that we’ve requested, is saying, ‘Stop the aid’ 91 minutes after Trump called Zelensky, and said, ‘Keep it hush-hush.' What more do you need to request a witness?”

“First, if there’s nothing wrong with withholding the aid, why didn’t Mr. Duffey want anyone to know about what he was doing? If this is a perfect conversation, if this is an OK action, why are they trying to hush it up?” he said. “And second, from whom did Duffey get the order and why did he do it?”

Sen. Amy Klobuchar, D-Minn., a presidential contender who sits on the Judiciary Committee, agreed that the emails show the need for the Senate to hear from Duffey, acting White House chief of staff and OMB Director Mick Mulvaney, and former national security adviser John Bolton.

“It's not like we're going on some kind of fishing expedition. We just want these major witnesses,” she told CBS News on Sunday. “If the president is so innocent and shouldn't be impeached, why is he afraid to have these people come forward?”