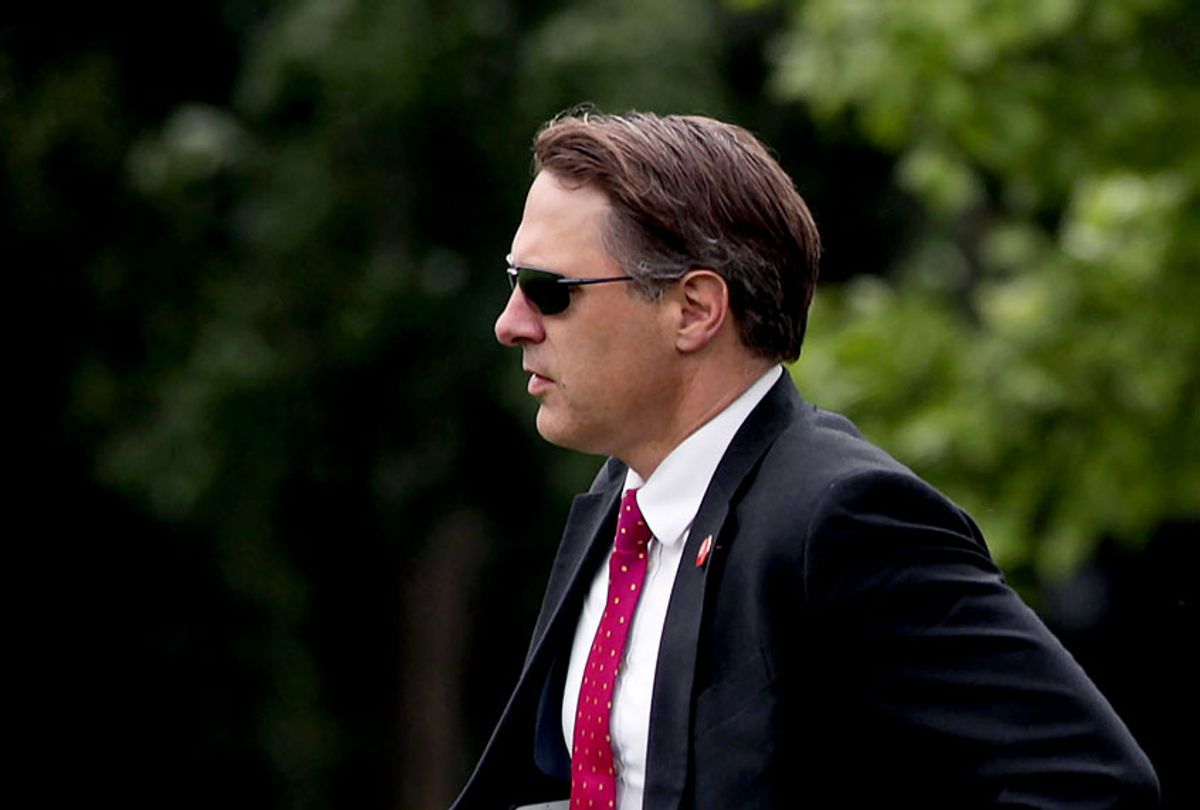 President Donald Trump gave a promotion to Robert Blair, a top aide to acting White House chief of staff Mick Mulvaney, just weeks after Blair refused to testify before the House of Representatives in its impeachment inquiry.

Trump appointed Blair as the special representative for international telecommunications policy, an office that will give him the responsibility to “promote a secure and reliable global telecommunications system,” according to Politico. According to a White House statement, Blair “will support the Administration’s 5G efforts led by the Assistant to the President for Economy Policy, Larry Kudlow. Mr. Blair will continue to serve as Assistant to the President and the Senior Advisor to the Chief of Staff.”

Blair refused to appear at a Nov. 4 deposition intended to explore what he may have known Trump’s order to withhold military aid from Ukraine, which was apparently linked to Trump’s effort to force the Ukrainian government to open an investigation into former Vice President Joe Biden and alleged meddling in the 2016 presidential campaign. House Democrats had subpoenaed Blair on Nov. 3.

In a closed door meeting, House Intelligence Committee Chair Adam Schiff, D-Calif., said that “some of that evidence has revealed that Mr. Blair was a percipient witness to the President’s misconduct. We can only infer, therefore, that the White House’s effort to block Mr. Blair from testifying is to prevent the committees from learning additional evidence of Presidential misconduct and that Mr. BIair’s testimony would corroborate and confirm other witnesses’ accounts of such misconduct, including Mr. Mulvaney’s admission from the White House Briefing Room that the Ukraine military aid was frozen by the President in order to pressure Ukraine into initiating investigations into the Bidens and the 2016 election.”

Blair is one of the Trump aides whose potential testimony has been at the center of negotiations between House Democrats and Senate Republicans over the breadth and rules of a potential impeachment trial.

“In the trial of President Clinton [in 1999], the House Managers were permitted to call witnesses, and it is clear that the Senate should hear testimony of witnesses in this trial as well,” Senate Minority Leader Chuck Schumer wrote in a letter to Senate Majority Leader Mitch McConnell last week. “I propose, pursuant to our rules, that the Chief Justice on behalf of the Senate issue subpoenas for testimony by the following witnesses with direct knowledge of Administration decisions regarding the delay in security assistance funds to the government of Ukraine and the requests for certain investigations to be announced by the government of Ukraine.”

Blair was listed among the witnesses along with Mulvaney, former national security adviser John Bolton and Office of Management and Budget associate director Michael Duffey.

The underlying scandal behind Trump’s impeachment is the apparent connection between the administration’s decision to withhold $391 million in military aid to Ukraine and its simultaneous request that the country announce an investigation into former Vice President Joe Biden and the hacking of Democratic Party computers in 2016. There is no evidence that Biden committed any crime in Ukraine, even though Trump has repeatedly promoted right-wing allegations that Biden had a Ukrainian prosecutor fired to protect his son Hunter, who worked for a Ukrainian natural gas company at the time. The claims that Ukraine was involved in 2016 election interference stem from a baseless conspiracy theory.