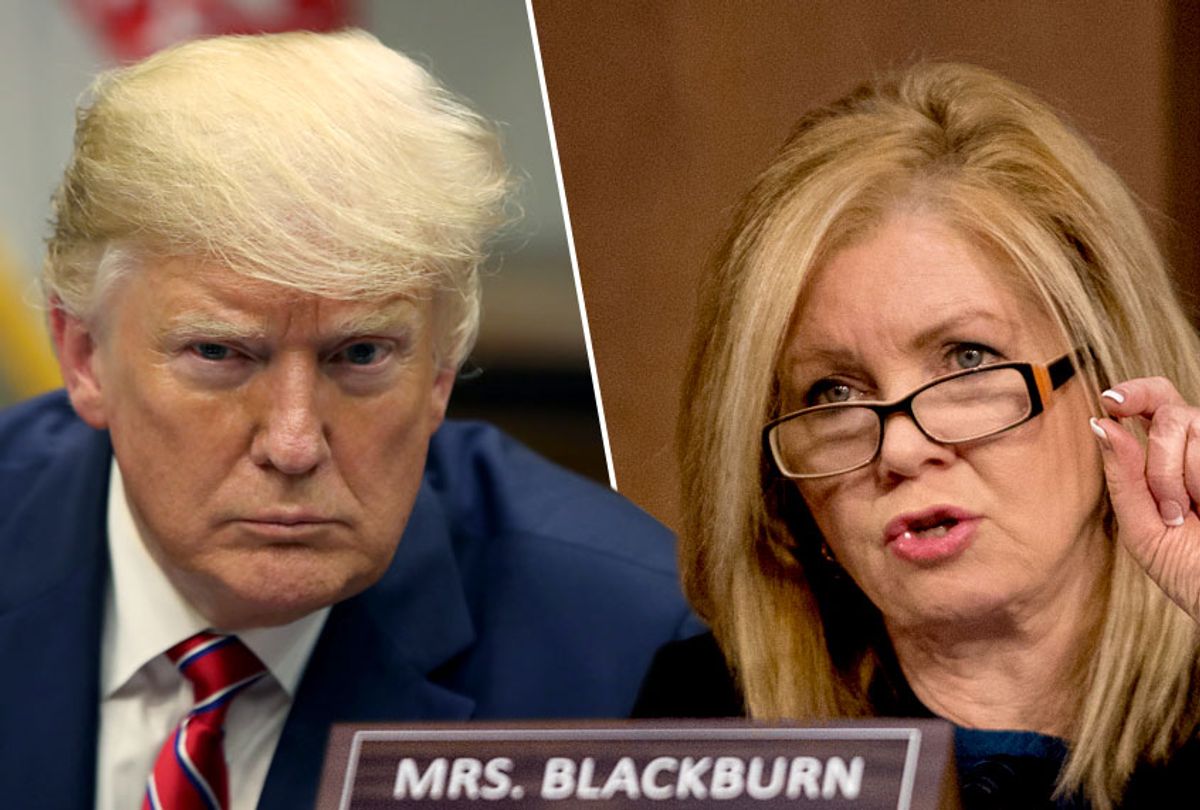 An attorney for the whistleblower whose complaint triggered the impeachment inquiry into President Donald Trump’s dealings with Ukraine has called for Sen. Marsha Blackburn, R-Tenn., to resign from the Senate Whistleblower Protection Caucus over “hostile” remarks.

Blackburn, a staunch Trump supporter, was elected in 2018 and joined the Senate Whistleblower Protection Caucus earlier this year. Since then, she has fired off numerous tweets attacking the Ukraine whistleblower.

Days later, she asked, “Is the ‘whistleblower’ a Democrat operative?”

Earlier this month, she complained that Time Magazine was “Fake News” for putting “an unidentified ‘whistleblower’” on its shortlist for person of the year.

The quotation marks around whistleblower appeared to echo a claim boosted by Trump that the government official who blew the whistle on the Ukraine scandal was “not a real whistleblower,” even though virtually the entire complaint was later corroborated by numerous Trump administration officials.

The Washington Post cited Blackburn’s comments about the whistleblower in a lengthy piece about Trump and his allies’ alleged attempts to intimidate witnesses in the impeachment probe.

Attorney David Colapinto, the co-founder of the National Whistleblower Center, shared the article and questioned how Blackburn’s comments “square with the Senator’s membership” in the Senate Whistleblower Protection Caucus.

The caucus was launched by a bipartisan group of Senators led by Chuck Grassley, R-Iowa, and Ron Wyden, D-Ore., in 2015 to "foster bipartisan discussion on legislative issues affecting the treatment of whistleblowers and serve as a clearinghouse for current information on whistleblower developments of interest."

Attorney Mark Zaid, who represents the Ukraine whistleblower, shared Colapinto’s tweet and agreed that Blackburn “should resign” from the caucus.

“Her comments are completely contrary to everything that caucus is supposed to stand for and protect,” he tweeted.

The caucus was formed to “raise awareness of need for adequate protections against retaliation for govt employees who call attention to wrongdoing,” he added, questioning why Blackburn was “still a member given her hostility” toward whistleblowers.

Blackburn is not the only Trump supporter who has gone after the whistleblower, even as his attorneys warn the attacks put his family’s safety at risk.

House Republicans repeatedly attempted to enter the whistleblower’s name into the record during the impeachment inquiry. Rep. Louie Gohmert, R-Texas, ultimately blurted out the name during a televised Judiciary Committee hearing. Donald Trump Jr. and Sen. Rand Paul, R-Ky., shared reports outing the alleged whistleblower to their millions of Twitter followers. The name was repeatedly said on Fox News.

An article naming the whistleblower was shared by the president himself on Thursday. Salon has not confirmed the identity of the whistleblower and is not publishing the name circulated by conservative outlets.

The attacks have come in an apparent attempt to discredit the whistleblower’s allegations, even though they have been corroborated by numerous Trump administration officials. Politifact rated Trump’s claim that the whistleblower got his “perfect call” almost “completely wrong” as its “lie of the year.”

Zaid and fellow whistleblower attorney Andrew Bakaj wrote in a Washington Post op-ed back in October that their client’s identity was “no longer relevant,” because “each allegation in the complaint is substantiated by new witnesses.”

Their plea did not stop the attacks, prompting Bakaj to send a cease and desist letter to the White House in November warning that the rhetoric of Trump and his allies had put his client and his client's family at risk.

This, too, did not stop Trump from publicizing the name on Twitter on Thursday.

The Washington Post article shared by Colapinto revealed that the CIA analyst who triggered the impeachment inquiry still works on issues related to Ukraine and Russia.

“But when threats against him spike — often seemingly spurred by presidential tweets,” The Post reported, “he is driven to and from work by armed security officers.”