The White House denies that Trump, who called for the whistleblower to be outed, had advance warning of Jr's tweet 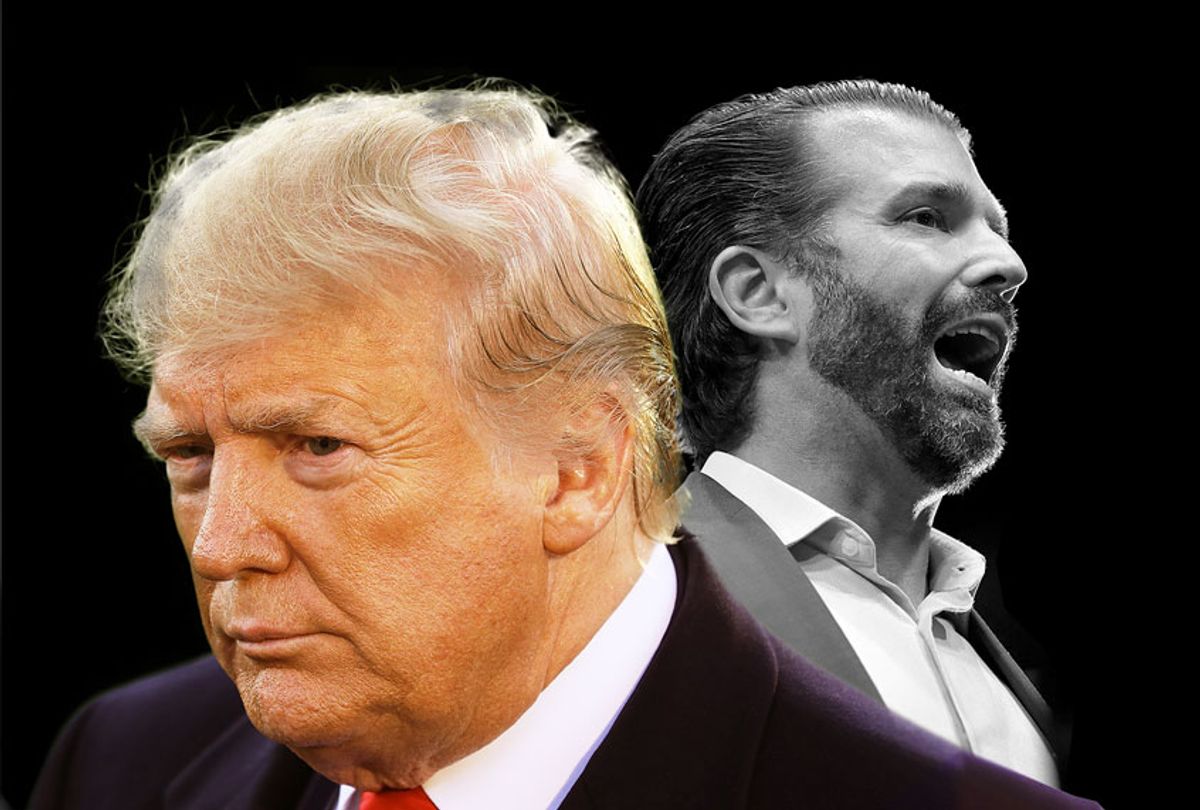 Donald Trump Jr. published the name of the alleged Ukraine whistleblower on Twitter despite, warnings from the purported official’s attorneys that revealing his identity would put him and his family at risk.

Conservatives have circulated the name of a CIA analyst who worked on the National Security Council in both the Obama and Trump administrations who was named in a RealClearInvestigations report as the purported whistleblower who reported President Donald Trump’s phone call in which he solicited the Ukrainian president to dig up dirt on former Vice President Joe Biden as the administration withheld military aid appropriated by Congress. Most Republicans have avoided disclosing the name, though Sen. Rand Paul, R-Ky., and others have shared the report. Paul demanded that the media out the whistleblower at a Trump rally on Monday.

The president’s eldest son went a step further on Wednesday, posting the purported whistleblower’s name on Twitter to his 4 million followers while sharing a Breitbart article alleging that the whistleblower “worked closely” with a Trump critic, because both were included in an email chain while they worked in the Obama administration.

Mark Zaid, an attorney for the whistleblower, condemned the president’s son identifying the CIA analyst as the alleged whistleblower in a statement to CNN’s Jake Tapper.

“Identifying any name for the whistleblower will simply place that individual and their family at risk of serious harm,” he said. “We will not confirm or deny any name that is published, but we will note publication does nothing other than show the desperation of a partisan crowd to deflect from the substance of the whistleblower complaint. It most certainly will not relieve the president of the need to address the substantive allegations, all of which have been substantially proven to be true.”

The White House tried to distance the president from his son’s actions, despite Trump's repeated calls for the whistleblower’s identity to be revealed.

The White House told reporter Yashar Ali that neither “the president nor any senior administration official was aware in advance that the president’s eldest son was going to tweet out the name of the alleged whistleblower.”

A defiant Don Jr. told Ali that the “outrage” over his outing of the purported whistleblower was “BS.”

“Those pretending that I would coordinate with the White House to send out a Breitbart link haven’t been watching my feed for a long time," he claimed.

On his Twitter feed, Don Jr. bragged that the “entire media is #Triggered that I (a private citizen) tweeted out a story naming the alleged whistleblower.” (Triggered borrows from the name of his new book.)

“Are we going to pretend that his name hasn’t been in the public domain for weeks now?” he asked. “Numerous people & news outlets including Real Clear Politics already ID’d him.”

Don Jr. then blamed the New York Times for publishing identifying details about the whistleblower.

“Maybe Real Clear Politics & others wouldn’t have been able to ID the alleged whistleblower if the NY Times didn’t out that he was a CIA official detailed to the WH?” he wrote. “The media is full of sh*t with their faux outrage over me tweeting something already in the public domain!”

However, the RealClearInvestigations report claimed to be based on a “dossier” which had been circulating among conservative circles on Capitol Hill — not an investigation based on details published by The Times. Numerous conservative platforms have since shared the unconfirmed identity of the purported whistleblower as fact.

Sen. Rand Paul tweeted the report out to millions of followers as he demanded that the whistleblower be hauled in for questioning. Paul also called for the official's identity to be reported by mainstream media outlets, prompting pushback from some of his Republican colleagues. Though mainstream American outlets have declined to name the purported whistleblower, Russian state-owned media outlets seized on Paul’s cue and spread the identity of the man identified in the report.

There is no public evidence to support the claim that the CIA analyst mentioned in the report and named by multiple Republicans is actually the whistleblower. Even Fox News has instructed its employees not to identify the alleged whistleblower, CNN reported. Host Jeanine Pirro complained last week that hosts “apparently can’t say” the name. Host Sean Hannity said Monday that he "confirmed independently" the whistleblower’s name but would not release it and “will take the lawyer's threats that they're going to sue me.”

But Trump allies sharing the name has caused consternation in mainstream media newsrooms. “What does the media do when or if the president names him? Or, like, Kellyanne [Conway] on the West Wing driveway?” a journalist at a major national news organization wondered to Vanity Fair.

Though Trump and his allies have seized on reports that the purported whistleblower may have worked on Ukraine with then-Vice President Joe Biden as a member of the National Security Council, such a tie, if true, would not negate any of the allegations in his complaint about Trump’s call.

The whistleblower's account has since been corroborated by a second whistleblower. The complaint was also reviewed by the director of national intelligence, the intelligence community’s inspector general and the top lawyer at the CIA — all of whom are Trump appointees. All three found the complaint “credible” and referred the revelations in the complaint for possible prosecution to the Justice Department, which declined to pursue the allegations. Since then, numerous Trump-appointed senior administration officials, including a senior National Security Council official who heard Trump’s call, have confirmed that the whistleblower’s allegation of a quid pro quo.

“Now everybody has testified and confirmed what happened. What’s the value of identifying him right now?” a national security reporter for a major news outlet told Vanity Fair. “The overrunning thought is that there’s a real concern for this guy’s safety.”