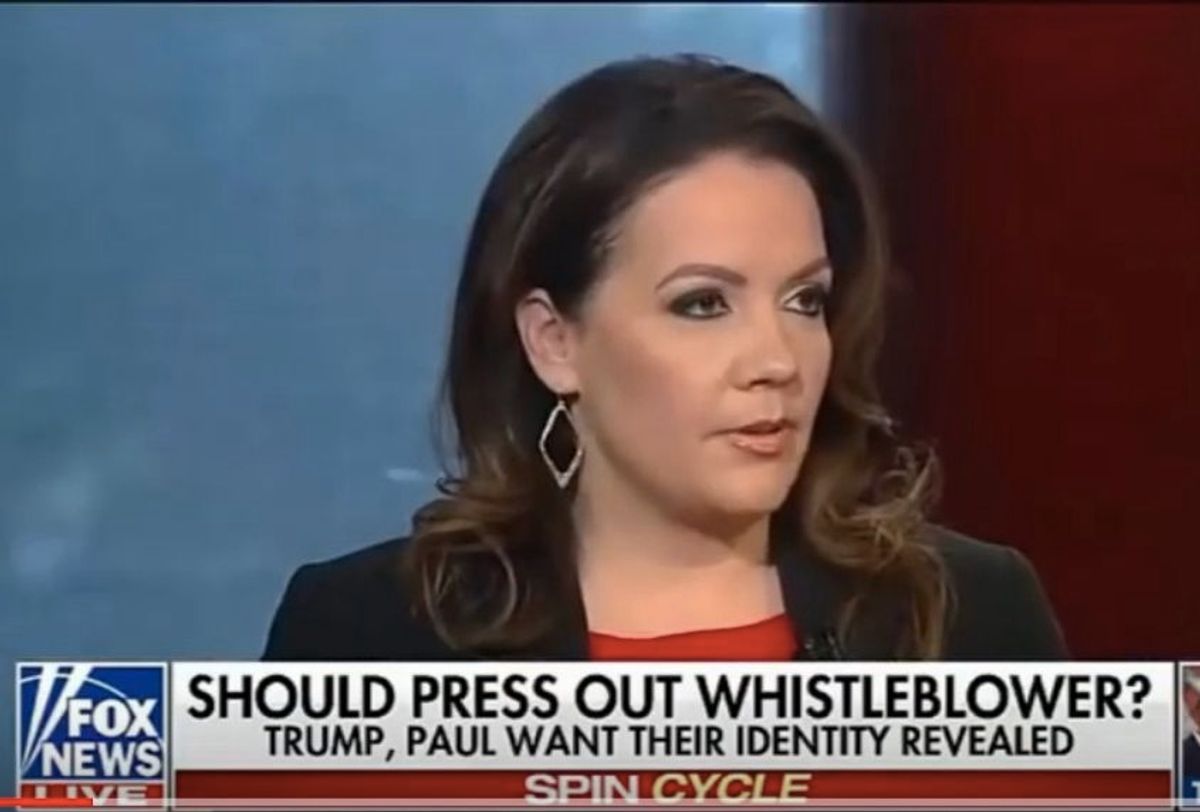 Hemingway appeared on a panel on “Media Buzz” Sunday to discuss whether the media should identify the alleged whistleblower, whose complaint triggered the impeachment inquiry into President Donald Trump.

Hemingway said that The New York Times, which identified the whistleblower as a CIA officer, revealed many identifying details about the whistleblower and pointed to an unconfirmed RealClearInvestigations report that outed a CIA analyst rumored in conservative circles to be the whistleblower to claim that the name is “already out there.” Salon has not confirmed the report and is not naming the alleged whistleblower.

“We could be talking about this reporting and talking about whether that’s accurate reporting or not,” she said. “So I feel a little confused why we are pretending it hasn’t already been reported.”

Hemingway’s decision to name the alleged whistleblower stunned Kurtz, who tried to play down the CIA analyst’s identity.

“I don’t know whether this is actually the person or not and I don’t want to speculate about that,” Kurtz said. “But there have been a few conservative outlets and commentators who have floated that name.”

Hemingway argued that it was “clearly wrong” for media outlets and social networks to ban people from discussing a name that “has been reported.”

Philippe Reines, a former Hillary Clinton adviser who appeared on the panel, was also taken aback and said it “might be the first time that the name has been mentioned on Fox News, and not by a Fox News reporter.”

Though Hemingway is the first paid Fox contributor to utter the name on the air, right-wing radio host Lars Larson also named the CIA analyst mentioned in the report Hemingway discussed last week during an interview with host Harris Faulkner, who did not push back.

The guidance has caused consternation among some Trump loyalists at the network. Host Jeanine Pirro complained that the hosts “apparently can’t say” the name and Sean Hannity claimed that he had “confirmed independently” the identity of the whistleblower but would “play the game for a little bit” after receiving the whistleblower’s “lawyer’s threats that they’re going to sue me.”

While Hemingway’s comment marked the first time a Fox employee named the alleged whistleblower, Trump’s allies and his own family have pushed the CIA analyst’s name into the public spotlight.

Donald Trump Jr. tweeted the name last week, prompting the White House to try to distance his father from the tweet. Rep. Louie Gohmert, R-Tex., dropped the name seemingly out of nowhere during an unrelated public House hearing last month. Rep. Matt Gaetz, R-Fla., tweeted the name as well. Sen. Rand Paul, R-Ky., shared the report naming the purported whistleblower to his millions of followers on Twitter and later stood next to Trump at a rally and called for the media to identify the CIA analyst mentioned in the report. Republicans on Capitol Hill have also repeatedly attempted to get the whistleblower’s name on the record at impeachment depositions in hopes that it will be made public.

Trump himself has personally called for the whistleblower to be identified, arguing that the whistleblower did not hear his July 25 phone call with the Ukrainian president, which Trump insists was “perfect.” Trump allies seized on details in the RealClearInvestigations report suggesting that the purported whistleblower worked with former Vice President Joe Biden on the National Security Council under the Obama administration to claim that he has “ties” to the former veep.

Though the whistleblower’s complaint about the call triggered the impeachment inquiry, a second whistleblower later corroborated the original complaint. The original complaint was also reviewed by multiple top Trump administration officials who found it “credible” and forwarded it for possible prosecution to the Justice Department, which declined to investigate the whistleblower’s allegations. Multiple Trump appointees have since testified to Congress that the president tried to extort Ukraine to launch a Biden investigation and a separate Hillary Clinton probe in exchange for nearly $400 million in military aid, which Congress had already allocated.

“Why is the president calling the whistleblower ‘fake,’ and perhaps more important, why is he insisting that the whistleblower’s identity being made public when that could send a chilling message to other government officials who may want to expose corruption without being exposed themselves?” Kurtz asked.

“Having the title whistleblower put upon you doesn’t mean that you shouldn’t have scrutiny as to what your motives are,” Grisham replied. “So I’m starting to wonder myself, you know, who is this person? Who is this person who purports to want to help the country but won’t talk to anybody but the Dems?”

The whistleblower’s attorney sent a letter to the White House on Thursday, warning Trump to “cease and desist” from attacking his client.

"I am writing out of deep concern that your client, the president of the United States, is engaging in rhetoric and activity that places my client, the Intelligence Community whistleblower, and their family in physical danger," attorney Andrew Bakaj wrote in a letter to White House counsel Pat Cipollone. "I am writing to respectfully request that you counsel your client on the legal and ethical peril in which he is placing himself should anyone be physically harmed as a result of his, or his surrogates', behavior.”