How hoarding and tidying up defined the decade

In the 2010s, we felt the life-changing magic of being buried alive 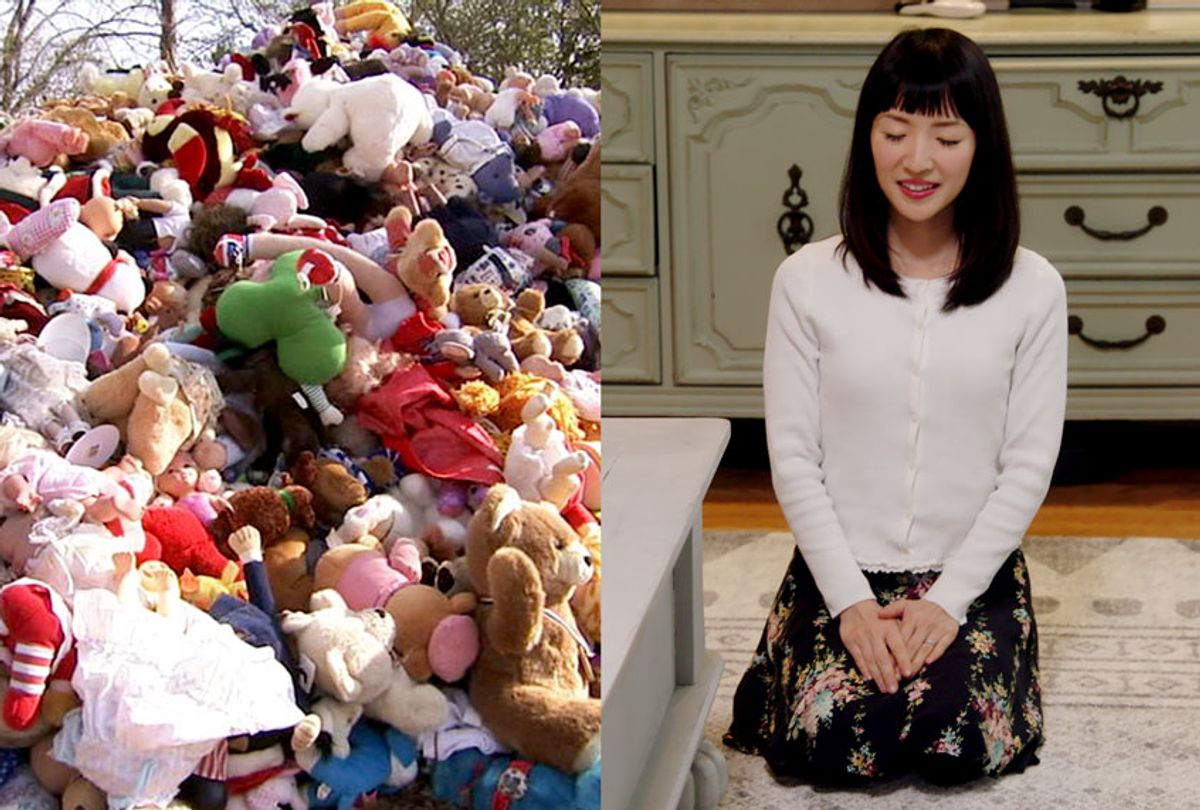 If the 2010s could be distilled into one word, the one word I would unquestionably choose would be: purging. From pimple popping to dystopian horror series like “The Hunger Games” and duh, “The Purge,” it was evident that this was the era we'd become a nation that longed to ritualistically expel its impurities — and watch itself doing so. As evidence, look no further than dual cultural phenomenons of hoarding and sparking joy.

Of all the relationships we have our the course of our lives, one of the most enduring and fraught is the one we have with our stuff. We desire things, we acquire things. We neglect things, we feel burdened by things. We throw things out. Then we do it all over again. The average American throws away about 81 pounds of clothing a year, and up to 40 percent of their groceries. We love abundance. We crave simplicity. And perhaps at no other moment in time have we simultaneously experienced both desires so acutely.

Our collective fascination with fresh, clean starts has always been integral to the self-help industry and to reality TV in particular  — who doesn’t love a makeover? But when “Hoarders” debuted on A&E in August of 2009 (followed seven months later by its younger sibling, TLC’s “Hoarding: Buried Alive”) the new age of colonics for your belongings was born. And a once taboo mental disorder became a viable entertainment genre.

Hoarders are not a 21st century invention — in the 1940s the Collyer brothers put the disorder on the map when they were found dead in their debris-riddled Fifth Avenue home. But their story was largely viewed as an eccentric anomaly, not a thing people made TV shows about. In a 1997 “Friends,” Ross dates the perfect woman (Rebecca Romijn), but can’t get past her repulsively cluttered lifestyle. The punchline has him breaking up with her, but his compulsive sister Monica offering to clean up her apartment. The episode is simply titled “The One with the Dirty Girl.” Seventeen years later, “The Mindy Project” offered up a similar blonde, beautiful girlfriend character (Julia Stiles) but now, thanks to modern reality TV, this time around she has a full blown and acknowledged hoarding disorder.

I will never forget the bright afternoon, not long before “Hoarders” debuted, that I brought my daughter for a playdate at the apartment of her schoolyard friend. I remember gasping when we stepped inside. The couch was covered in newspapers and strewn with clothes. Stacks of cardboard boxes lined the narrow hallway, creating a tunnel effect. The dining table held a crumbling gingerbread house. It was summertime. I had never seen anything like it in my life. At this point in my life, I still believed hoarding was something only squirrels did. Then I learned. I guess we all did.

There are reality shows that make you feel uplifted — a sweet family gets a home renovation or a busy mom gets a haircut and some pants that make her butt look smaller. Then there are the ones that make you go “Holy crap, how did this person’s life get like this?” There’s a potential value to giving little-seen human stories visibility and empathy. “Hoarders” helped raise awareness of an often misunderstood disorder, and may even have pushed the psychiatric community in a positive direction. In the 2000 text revision of 4th Edition of the "Diagnostic and Statistical Manual of Mental Disorders," hoarding was listed as a criteria for obsessive-compulsive personality disorder. In 2010, hoarding disorder was proposed as a new and distinct category for the 5th edition. In 2013, it was officially introduced into it.

I don’t know how one could watch even a minute of a hoarding show and not feel a deep sense of compassion for the suffering of the individuals featured, even when it comes with a strong shot of that Monica Gellar-like yearning to get in there in a Hazmat suit. But our fascination with peering behind the curtain — or under the mountains of trash, as the case may be — and into the lives of truly distressed human beings has not been entirely an exercise in learning and growing. In 2015, the British Psychological Society implored networks to “desist from using mental health problems to entertain and shock the public.” And writing here in Salon in 2016, author Rachel Kramer Bussel — who has been candid about her own hoarding problems — explained her discomfort with the genre, saying, “‘Hoarding’" is showcased as out-there, over-the-top, monstrous. We’re meant to feel sorry for the hoarders, perhaps, but not to truly understand what hoarding feels like for them.” And, of course, distinguish ourselves from them.

In recent years, the industry around getting rid of (or maybe just storing somewhere off-site) our belongings has flourished like mold on a pile of unwashed dishes. The same year “Hoarders” debuted, Gretchen Rubin published “The Happiness Project: Or Why I Spent a Year Trying to Sing in the Morning, Clean My Closets, Fight Right, Read Aristotle, and Generally Have More Fun,” a book whose very title connected the dots between closet cleaning and fun. (Ten years later, she followed up with the equally tantalizing "Outer Order, Inner Calm.")

But no one represents the desire to bring order to our chaos like Marie Kondo. When the Japanese decluttering expert published her seminal “The Life-Changing Magic of Tidying Up” in 2011, she quickly became a global sensation. Her book spent over three years on the New York Times bestseller list, making it an essential “Dark Side of the Moon” for Container Store POP! rewards card holders. Kondo’s philosophy, a liberating, trust-your-gut approach to what to keep and what to let go, turned the phrase “Spark joy” into a way of life and spawned its own Netflix series. It's easy to  see the gentle appeal.  Kondo's clients aren’t mentally ill; they’re just relatably stuck and need a push to open the chakras of their homes. And the Konmari method doesn’t demand a spartan aesthetic — this is no harsh, capsule wardrobe with a 28-day juice fast chaser regimen. Although it has been misconstrued as a demand to burn your books, in reality, it’s an invitation to truly cherish your possessions. And if you can’t love them all the way, you can let them go.

The percent of individuals who actually have a hoarding disorder is very small — somewhere around 6 percent of the population. The percentage of us who feel overwhelmed and inundated is closer to, well, everybody. We feel the constant clutter of our lives all around us, in the dings on our phones and the Legos beneath our feet. We see thousands of ads every day. We consume up to twice as many material goods as we did 50 years ago. So it makes sense that in the most sensory-overloaded decade in human history, our obsession with managing it all reached such a critical mass.

The idea that tossing out our old leggings could bring about any measure of calm and control is a powerful one. It sounds easy. It promises serenity. And it’s actually pretty legitimate.  A few years ago, I did a Konmari project with a beloved friend over the last months of her life. The process of going through her belongings together, treating them with respect and gratitude even if they were headed for the dumpster, was a singularly holy endeavor.

The most insidious clutter we live with every day is the kind we never even see. It’s our own guilt and shame. Embarrassment over the too-tight jeans that represent a dozen failed diets. A sense of duty to the books we want to believe we’ll get around to reading. Anxiety over what catastrophe may befall if we don’t hang on to a spare, albeit broken, vacuum cleaner. The cathartic experience of watching other people cling to their garbage or the active one of shedding our own represent different expressions of the same primal fear — of suffocating like a Collyer brother under the weight of our own baggage. They both compel us to ask, what if we just let go of what doesn’t serve us? What if we made space for something else? And what if, despite all the evidence of our history and inclinations, all the temptations incessantly in our path, this time, we filled that space with something other than just more leggings?