Before the first female 007 debuts, Jodie Whittaker's "Doctor Who" gets into the spy game

After a year off the air, the 13th Doctor is stirring up fun with a New Year's Day mission to save . . . MI6 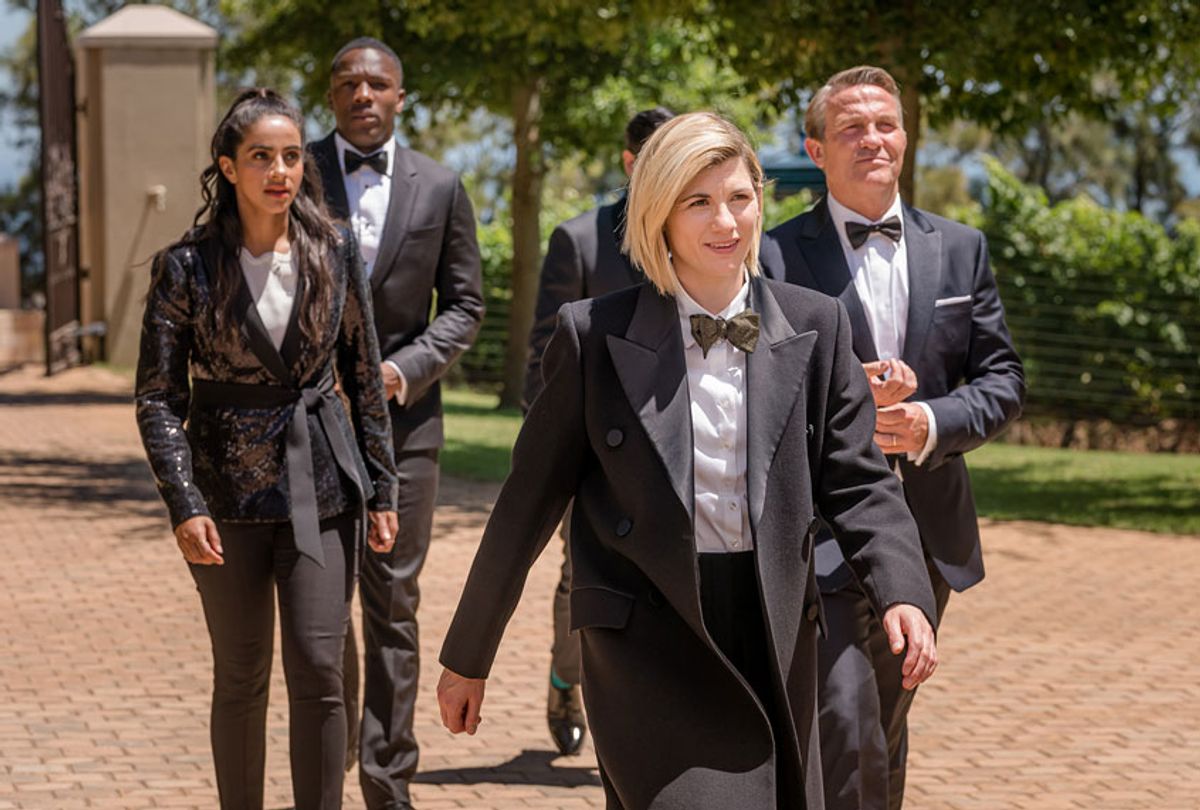 When last we saw “Doctor Who,” The Doctor had successfully repelled another Dalek invasion. This central crisis of the 2019 New Year’s Day special marks the end of the introductory season for Jodie Whittaker’s Time Lord, the 13th Doctor and the first woman to take on the role.

Nearly every new “Doctor Who” star requires about a season’s grace period to win over the audience, and the same holds true for Whittaker, who previously worked with new showrunner Chris Chibnall in the BBC drama “Broadchurch.” Adventuring with this Doctor had to be slightly different.

Throughout Season 11 Whittaker’s Doctor, with the help of her companions, confronts all manner of intergalactic adversaries in addition to those all too common Earthly foes known as sexism, racism, and class discrimination. As such, Whittaker’s Thirteen faces the same frustrations and obstacles with which women the world over have contended since the dawn of civilization.

Pointing out the obstructive nature of all these isms also underscores the fact that Thirteen must be more resourceful, cleverer, and tougher to get the job done. Adventuring with this incarnation of The Doctor is as dangerous for her companions Ryan (Tosin Cole), Yasmin (Mandip Gill), and Graham (Bradley Walsh)  as it was for previous ones.

This time though, we’re not asked to overlook the fact that Thirteen’s adopted “fam,” as she awkwardly calls them, consists of a black man, a Muslim woman of Indian descent, and an elderly white guy who we’re going to assume didn’t vote for Brexit. Chibnall and his writers cleverly and warmly factor this acknowledgment into the 11th season without taking anything away from The Doctor’s adventures.

Well, almost. My sole wish at the season’s end was for Chibnall and his writers to relax into the fun of this universe. One year later, The Doctor and fam have returned with a  breezy New Year’s Day homage to a beloved film franchise that, like Whittaker, also has sustained its share of sexist backlash but soldiers on regardless.

Whovians, get ready for the two-part Season 12 premiere titled . . . “Spyfall.”

“Spyfall” is not merely a flashy return for “Doctor Who.” The two-parter marks a definitive end of the getting-to-know-you period for Thirteen, and kicks off a new arc that returns The Doctor and her companions to territory, lore, and adversaries familiar to longtime fans.

The 2019 New Year’s Day special drops hints that the new season would go this way by pitting Thirteen against a Dalek which, like her, looks drastically different from the vintage bad robots to which we’re accustomed.  Chibnall’s willingness to tinker with that adversary’s iconic appearance in the simplest of ways without violating the essence of what they are evokes the essence of what this new era of “Doctor Who” is about in an exciting way.

Transformation and revival are central to this mythos and yet some enemies and recurring characters have barely changed until now. And this first new hour bursts with the confident energy of Chibnall, Whittaker, and the writers entering an era in which Thirteen’s feels less constrained and freer to, in her words, get on with the job.

After all, despite all the sexist braying, the "Doctor Who" universe did not fizzle out with Season 11. On the contrary, Whittaker’s 2018 debut as The Doctor drew the largest audience for “Doctor Who” in a decade, with 10.9 million U.K. viewers tuning in based on consolidated ratings.

Once the Season 11 numbers were crunched, as it turns out, it drew more viewers on average than the first seasons of the Doctors portrayed by fan favorite David Tennant, Matt Smith, and Christopher Eccleston, and 20 percent more viewers than 12th Doctor Peter Capaldi’s finale season.

If thumbing his nose at misogynists was on Chibnall’s list of objectives in writing “Spyfall” for Whittaker, mission accomplished. At the very least, one might think of it as his and Whittaker’s way of rolling out the welcome mat for another woman punching through the glass ceiling of another long-running popular culture franchise.

In 2020 the world will welcome a black female 007 for the very first time. And as expected, the announced casting of British actor Lashana Lynch as 007 in the upcoming James Bond film “No Time to Die” brought out the sexist trolls in force, similar to the caveman revolt precipitated by Whittaker’s takeover “Doctor Who.” (“No Time to Die” also is co-written by Phoebe Waller-Bridge; I’d be amazed if the one-two combo of a female screenwriter and a woman 007 did not cause a few trolls to stroke out.)

Even so, inhabiting the body of a woman still subjects The Doctor to patriarchally imposed rules and assumptions on Earth. This was true last season, when the team lands in 1612 Lancashire or 1955 Alabama. It still holds in this episode’s trip to modern-day MI6 headquarters, where the director (played by Stephen Fry) initially greets a very confused Graham as The Doctor only to be flustered when our heroine sets him straight.

This is a minor bump in the road, but one high-ranking professional women are used to dealing with. Chibnall gives it a nod, and then they get down to business.

And it is incredibly fun to watch.

The Doctor gets called in when intelligence operatives working for organizations are attacked without warning by strange alien forces that materialize out of nowhere. In the way of all The Doctor’s finest opponents, this one operates in ways she can’t predict, discovers means of thwarting her genius at every turn.  And they appear to know the terrain better than she ever could.

Why, it’s almost as if there’s a global conspiracy abetting them – perhaps even one backed by a shadowy supervillain? Who can say. All you need to know is that this perilous jaunt necessitates a change into black tie attire, since no spy flick is complete without a round in bowties and fancy suits.

Dropping Whittaker’s Time Lord into a spy caper connected to an intergalactic threat cheekily acknowledges that the show is through responding to toxic doubts caused by Whittaker’s assumption of a role previously played by 12 men (13 if you count the Hurt Doctor). Now, she’s leading a team through an impossible mission on behalf of MI6. And where she goes, Bond will follow. The outlook for 2020 looks more exciting already.

Part one of the "Doctor Who" Season 12 premieres airs Wednesday, Jan. 1 at 8 p.m., with the second half airing in its regular time slot on Sunday, Jan. 5 at 8 p.m. on BBC America.