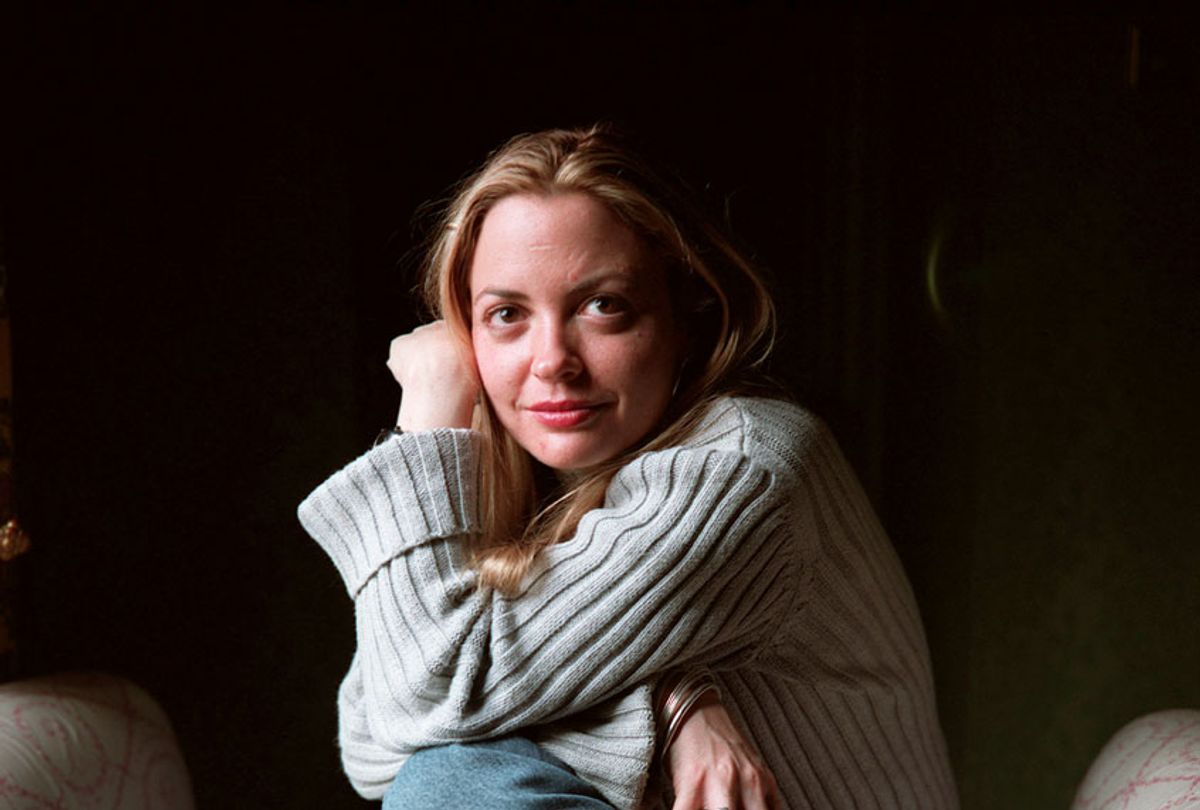 A bottle of Prozac sits on my kitchen counter. It's the property of one member of my household, and a friendly companion to my own bottle of Wellbutrin that resides beside it. Those two containers are part of the day-to-day fabric of our lives and routines here, like our toothbrushes and sticks of deodorant. We simultaneously take them for granted and wouldn't dream of letting them run out. They help keep us fit for society and our own company as well. Sometimes, I look at those bottles and think of every bit of relief and shame and trepidation I felt when our doctors first suggested those pills might ease our suffering, and I remember the complicated woman who helped create the modern face of depression and anxiety.

Elizabeth Wurtzel died of breast cancer on Tuesday in New York City. She was 52. Though she was best known for her controversial, frequently self-absorbed views — she famously described watching 9/11 unfold as "a really strange art project … a most amazing sight in terms of sheer elegance" — her impact on the way we talk about and treat mental health issues cannot be overstated. If you or someone you love is alive today even in part because of the right combination of therapy and meds, there's a high probably that survival was touched by at least some of Wurtzel's magnanimous, messy influence.

Prozac was not unheard of before Wurtzel wrote a bestselling memoir with the drug's brand name in the title, of course. Decades in the development, fluoxetine hydrochloride was first introduced to the market as an antidepressant in 1987. It was an instant pharmaceutical blockbuster for its maker, Eli Lilly. In its first year on the market alone, 2.5 million prescriptions for it were filled. It became a household name in 1993, thanks to psychiatrist Peter D. Kramer's pop science tome "Listening to Prozac." But it took the perfect storm of timing, canny marketing and Wurtzel's own formidable charisma to give Prozac its contemporary cachet.

In April of 1994, Kurt Cobain died by suicide. His death was a shock, if not exactly a surprise — he had been publicly grappling with drug abuse and at least one known suicide attempt prior. Yet his final message was a revelation. It was a note from someone who understood how much he had to live for, how seemingly good so much of his life was and who was hellbent on self-destruction anyway. "Why don't you just enjoy it?" he wrote to himself. "I don't know!" he replied.

Five months later, a debut memoir by a Harvard grad the same age as Cobain debuted to instant buzz and must-read (or must-hate-read, depending) status. "Prozac Nation: Young and Depressed In America" was not the book's original title; Wurtzel had wanted it to be the Nirvana lyric "I Hate Myself and I Want to Die." But Wurtzel was not Kurt Cobain, tortured Gen X genius, and she was not granted the same unconditional public devotion. She was slim, pouty and privileged. She was a girl who wrote about hookups and drug abuse from the ivory tower of the Ivy League. She was defiant and unapologetic, a grunge Sylvia Plath with — as any profile of her at the time would remind you — a nose ring and tattoo. Long before XOJane and its ilk made peddling your worst moments a seductive path for young, female writers to get attention, Wurtzel was a the girl who let it all out, shamelessly.

She also articulated many of the same frustrated contradictions that Cobain had. She had everything and she felt ferociously alone. She was glad for the change medication had made in her life and she was also nostalgic for the person she'd been at her deepest depths. This is your brain on antidepressants, she explained. The drugs might make you feel better but they won't necessarily make you a better person. The side effects aren't great. Maybe you, dear reader, don't need them at all. Life is really hard and sad for everyone, chemically balanced or not, and SSRIs are not magic beans. She also helped put forth a notion that still needs regular reinforcement today: that antidepressants won't make you happy. They just might make you less sad, and that has to be good enough.

Critics found the paradoxes confusing. The New York Times called the book "wrenching and comical, self-indulgent and self-aware," and noted that its "self-pitying passages make the reader want to shake the author, and remind her that there are far worse fates than growing up during the 70's in New York and going to Harvard." Wurtzel's own Harvard Crimson's critic wrote, "I've been depressed too, and with many of the same symptoms as Wurtzel's (though I certainly haven't capitalized on it as effectively as she has). However, that doesn't mean I want to listen to her self-indulgent whining, or that it will help me come to terms with my own life."

It's true that if in the Nineties you were looking for the mass market science you got from "Listening to Prozac," the memoir's title was misleading. It's also true that Wurtzel's writing could generously be described as that of a non-prodigy. But she was nevertheless a trailblazer, a woman who refused to play the role of noble sufferer. As such, she was undeniably a part of a signifiant social movement around mental illness and its treatment. I'm not so sure we'd have a "Crazy Ex Girlfriend" production number like "Anti-Depressants Are So Not a Big Deal" — or a "Crazy Ex Girlfriend," period — had Wurtzel not paved that rambling, difficult path.

My life crisscrossed with Wurtzel's at various points over the last 25 years. Usually, I'd run into her at a party somewhere and she'd look at me like she couldn't quite place me and then embrace me like I was her best friend. When she revealed she had Stage 4 breast cancer, I reached out to her as a veteran of the metastatic club. Her subsequent correspondence was uniformly clear-eyed, plainspoken and darkly humorous.

Elizabeth Wurtzel was one of the first people I ever interviewed in my career. My friend Ali was writing for a rival alternative weekly at the time, and also interviewed her on that same book tour. Like Wurtzel, Ali had similarly been among the first generation of youth medicated for depression, and had been transfixed by the book's poignant decadence and imperfect hopefulness. Ali ended her life on a brilliant August day several years later. Neither "Prozac Nation" nor Prozac itself could save her.  I believe, though, that she lived her last years with a measure of support and comfort that had not been possible before either of those two had come along.

I remember two things about that early interview I did with Elizabeth Wurtzel, because I think about them both pretty regularly. I remember how this girl who had seemed so intimidating on the cover of her book, with her low sling jeans and long hair and enigmatic gaze, who had written so nonchalantly about extreme things, was in fact exuberant and uproarious. I remember how tickled she was to be in a sleekly fancy suite on a high floor in a modern hotel. "Look at this bathroom," she said, as she led me into an enormous bathroom to show me a shower so luxurious it had a wooden stool in it. We both marveled at it, like maybe having a wooden stool in a shower was a very elegant thing? We were young and full of wonder.

More than that, though, I recall asking her why in her memoir she had so casually glossed over winning the Rolling Stone College Journalism Award, as if it was just one more small distraction in the midst of all her partying and depression and attempted suicide. I remember her shrugging and saying, "Because that's what it felt like." I didn't yet personally understand how success and achievement don't actually fix you, that the answer, when you are in pain, isn't a prize or a good grade or a wedding or a vacation. Now, I reflect on that shrug when I feel like I ought to be OK but I'm not anyway, or when I see someone else who seems to have everything, and my impulse is to judge them for their own struggles. Because that's what it feels like. Drawing the short straw in the game of brain chemistry doesn't mean you don't have joys or victories or love or a wooden stool in the shower. It's not something you can wish or hope or talk yourself out of either. Wurtzel helped me — and countless other individuals who would someday find themselves in the harrowing abyss of depression, anxiety, trauma or any crapstorm mental health combo you can name — that we weren't failures for needing help. I look at those bottles on my kitchen counter and I am thankful for them every day. Just as I'm thankful to Elizabeth Wurtzel, my first and most memorable guide to them.