He also echoed Sean Hannity, who said Trump "wanted to talk and wants peace — and they are going to get hit hard" 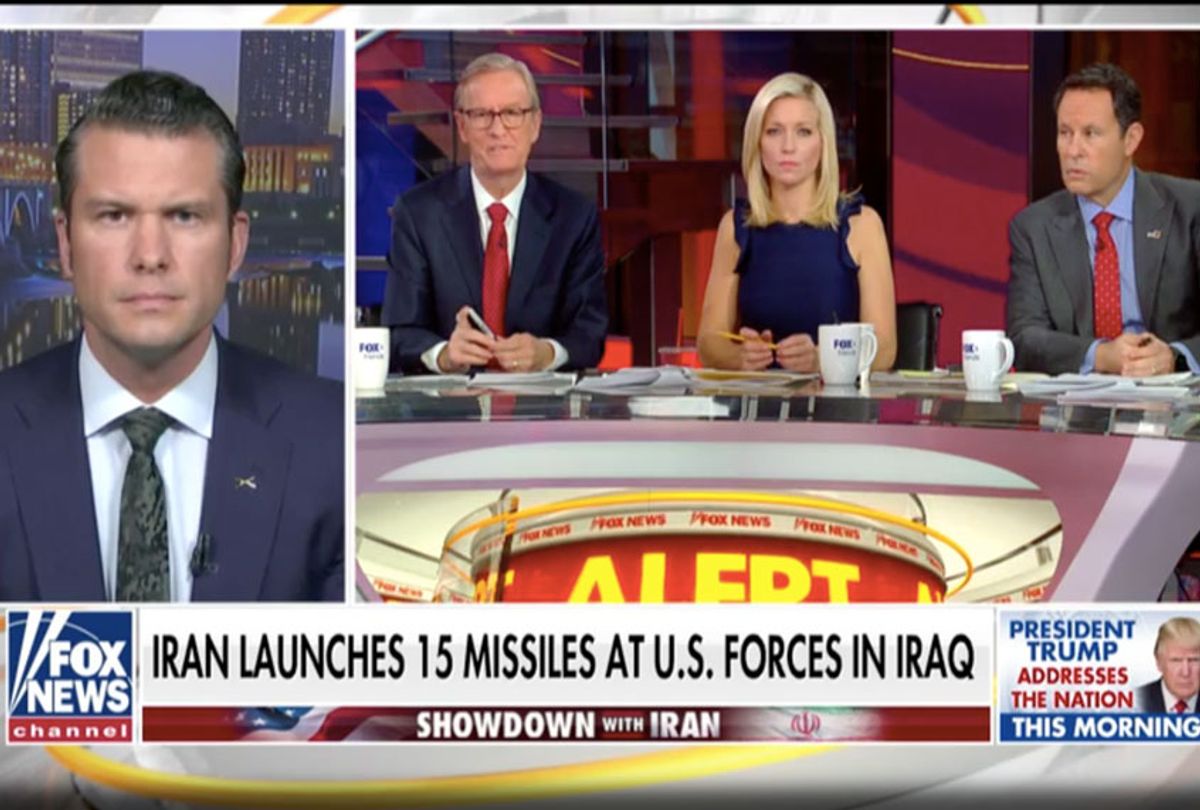 Calling for decisive strikes, the "Fox & Friends Weekend" co-host Pete Hegseth told his weekday counterparts Wednesday morning that Iran needs to “come back limping and begging” rather than “seething” after it retaliated against the U.S. for the ordered killing of Qassem Soleimani.

Earlier in the broadcast, Hegseth claimed that Iran was “not as capable as they want the world to believe they are. They want something to sell for internal propaganda. I totally get that. None of this, though, changes the calculation of this regime, which is an evil regime. This is like if ISIS controlled a state — just Shia version. They have their own caliphate. They want to export it. They are premised on the exportation of terrorism, death to America, death to Israel.”

Hegseth also praised Trump’s response to Iran, commenting that “the president has played this perfectly.”

While he does not support a ground war or an occupation, Hegseth said that “Iran has been in an endless war with us for 40 years. Either we put up and shut up now and stop it, or we kind of wait and go back to the table and let them dither while they attempt to continue to develop the capabilities to do precisely what they’ve said they want to do.”

His comments were echoed by other Fox News personalities. On Tuesday night, Sean Hannity said that Iran has “now been begging — the president wanted to talk and wants peace — and they are going to get hit hard. Their hostility will now be met with the full force of the greatest, most advanced, most sophisticated military this world has ever seen. As a former CIA station chief Dan Hoffman pointed out: Any hostile action by Iran would be regime suicide.”

Like Hegseth, Hannity also said he does not want a ground war. Instead, the Fox News host argued that Trump should rely on America’s “superior weaponry.”

Similarly, Sebastian Gorka, a former adviser to President Donald Trump, told Fox Business Network’s Lou Dobbs on Tuesday that “they chose the wrong time with the wrong president. This president will unleash holy hell on that regime — not against the people of Persia but against the murderous mullahs that have created a theocratic dictatorship that is a pariah and the greatest sponsor of state terrorism in the world today.”

Iran launched more than a dozen ballistic missiles targeting U.S. military and coalition forces on Tuesday. This was a response to the ordered killing  General Qassem Soleimani, an Iranian military leader believed to be responsible for taking American lives, by Trump.