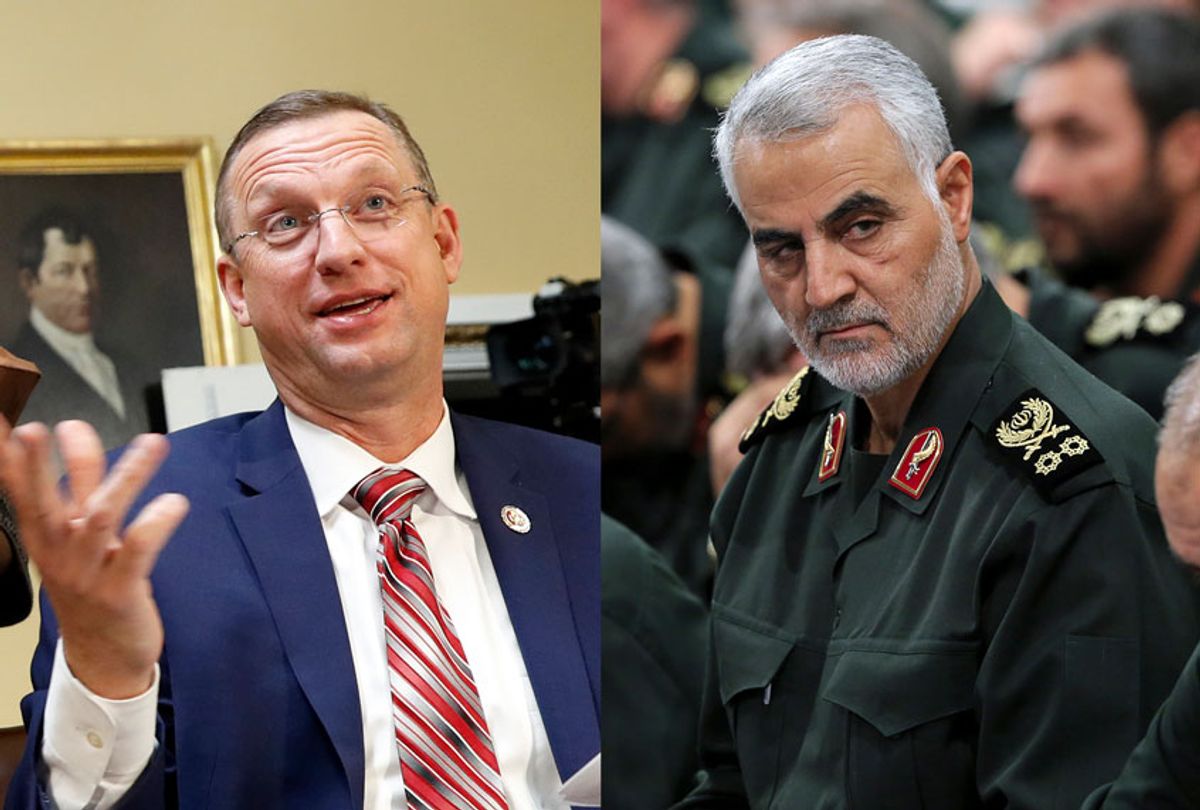 A Republican congressman made the false claim that Democrats were upset about the assassination of Iran's Qassem Soleimani because they "love" terrorists during a Wednesday appearance on a Fox network.

“If it wasn’t so sad and serious with our country, to have Nancy Pelosi . . . I did not think she could become more hypocritical than she was during impeachment,” Rep. Doug Collins, R-Ga., told Fox Business Network host Lou Dobbs. “But guess what? Surprise, surprise! Nancy Pelosi does it again, and her Democrats fall right in line. One, they’re in love with terrorists. We see that they mourn Soleimani more than they mourn our Gold Star families who suffered under Soleimani — that’s a problem.”

He added, “But also look at this: In 2011, when President Obama went into Libya and stayed longer than they thought the War Powers [Act] says he should stay, they said nothing. And, in fact, she actually excused it and said this is just what presidents do.”

A number of public figures took to Twitter to denounce Collins’ remarks.

“Who is running against this craven un-American ignorant asshole named Doug Collins? I will max out to you tomorrow. I hope you all join me,” former U.S. Attorney Preet Bharara tweeted Wednesday.

Antwon Stephens, a Democratic candidate for congress in Collins’ district, wrote that “Doug Collins accuses Dems of loving terrorists but he sat back on domestic terrorism in his own Gainesville backyard inspired by the hate of him and Trump. A hateful church shooting was halted at Bethel AME Church. I was the only candidate to support them.”

Democratic strategist Peter Daou also harshly condemned Collins’ comments, tweeting: “It's not that these GOPers have no shame. It's not that they are brazen hypocrites. It's worse. They lack an iota of self-awareness. They lack a moral compass. They lack a shred of intellectual honesty. Only one party has attacked Gold Star families, @RepDougCollins: Yours.”

The Georgia congressman made headlines last month after he was admonished by Stanford law professor Pamela Karlan for claiming during her public impeachment testimony that she was a partisan who did not care about the “facts” of the Trump impeachment case.

Collins alleged that “the discussion today will be about whether constitutional principles support impeachment based on 300 pages of supposed 'facts' we just received, which ignore inconvenient, exculpatory information. This unfair process is politics as usual, but this time it's politics to overturn 63 million American votes."

"Mr. Collins, I would like to say to you, sir, that I read transcripts of every one of the witnesses who appeared in the live hearing, because I would not speak about these things without reviewing the facts," Karlan said in her opening statement. "I'm insulted by the suggestion that as a law professor, I don't care about the facts."