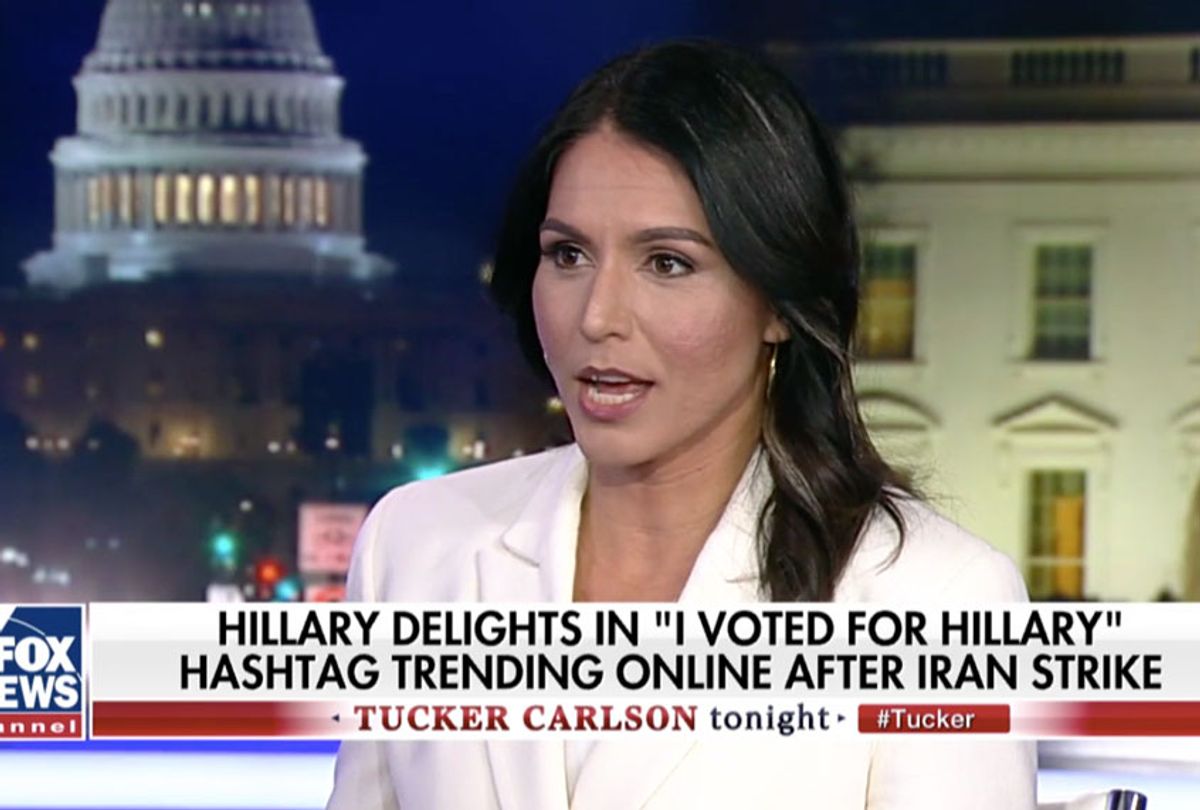 Tulsi Gabbard, the Hawaii congresswoman currently vying for the Democratic Party's presidential nomination, told Fox News host Tucker Carlson she believes that former Secretary of State Hillary Clinton is a “warmonger” — and her approach toward Iran may not have been different from that of President Donald Trump.

“I think everybody knows and understands that she is a warmonger, and it is her record that is proof of that,” Gabbard told Carlson on Wednesday. “You showed the clip about Libya. Look to her influence on going to launch regime change in Syria, Libya. You look throughout — obviously, her support for the war in Iraq — throughout her history, her track record is well known. And I think this is why a lot of people, back in 2016 in the general election, decided that they would vote for Trump because of what he was saying on the campaign trail about ending stupid wars and bringing our troops home.”

Earlier in the interview, Carlson claimed that Clinton had bragged about overthrowing Muammar Gaddafi, the former Libyan dictator, while she was secretary of state. He also played a clip of her from the 2008 presidential campaign saying that she would “totally obliterate” Iran if that country launched a nuclear attack against Israel.

After denouncing Clinton as a “warmonger,” Gabbard claimed that Americans have told her on the campaign trail they want to elect her as president because they feel Trump has not done enough to keep America out of “stupid wars.” Gabbard called for America’s troops to be pulled out of both Iraq and Syria.

This is not the first time that Gabbard has referred to Clinton as a “warmonger.” After Clinton claimed that Gabbard was “a favorite of the Russians” in November, Gabbard responded by labeling Clinton the “queen of the warmongers” and an “embodiment of corruption” before demanding an apology from her. Gabbard has emerged as a prominent Democratic voice on Fox News while she has aroused controversy among the left from decisions such as voting “present” during President Donald Trump’s impeachment vote instead of taking a stand.

Carlson, on the other hand, has emerged as an outspoken opponent of America’s involvement in overseas conflicts.

“So 17 years, trillions of American dollars, more than 35,000 Americans killed or wounded — you probably know one — and this is what we get at the end in return: Another Iranian proxy state that hates us,” he told Gabbard Wednesday on his broadcast. “It's infuriating. In fact, it's worse than infuriating — it's immoral.”

After claiming that America’s involvement in Iraq had been mismanaged, Carlson concluded that “there may be an upside to all of this sadness, and it's this: We can go now. Iraq's democratically-elected government has asked us to leave, and we should leave — immediately."