Why solve climate change when you can monetize it?

Congress slips in a little bit of cash to fund geoengineering, as part of a larger ploy 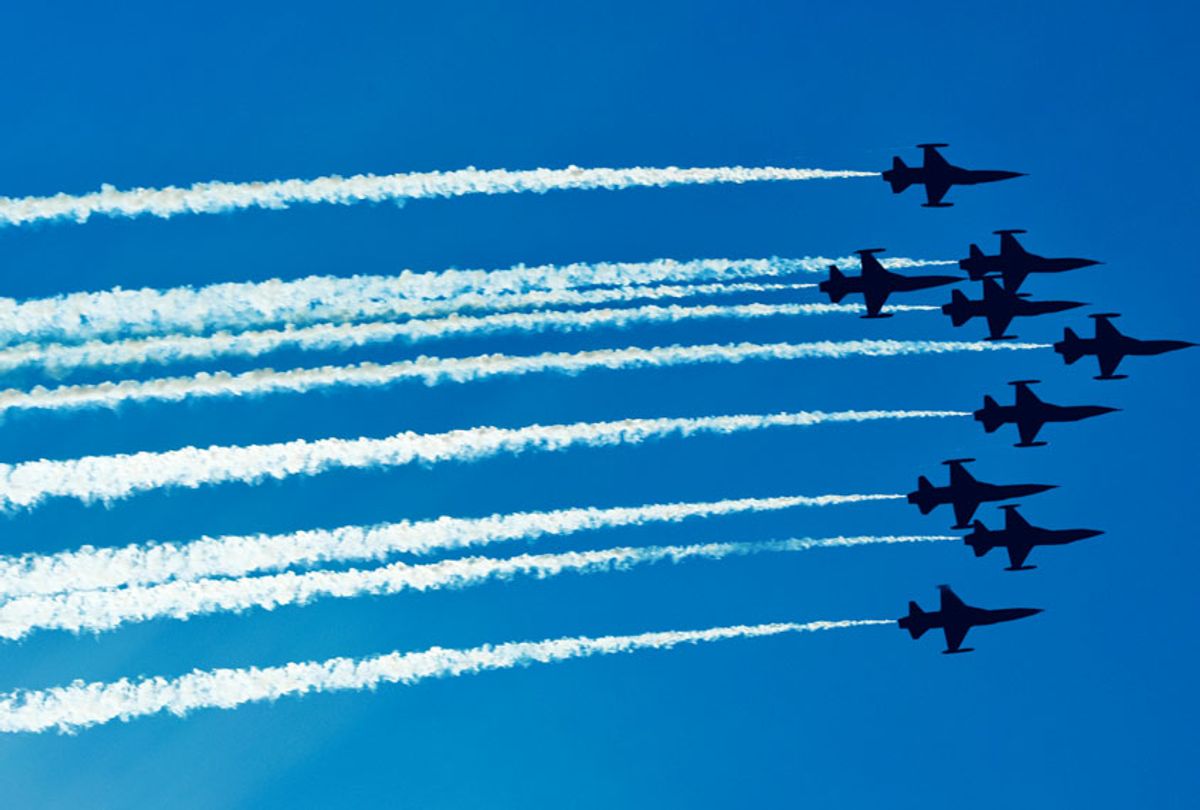 Hidden in a $1.4 trillion spending bill passed by Congress last month, in a blink-and-you'll-miss-it paragraph, was a sizable provision to fund research to reverse climate change. No, not in a meaningful long-term way, by actually reducing our dependence on fossil fuels or reorganizing the economy to be based on need rather than consumption of disposable goods; rather, the research dollars were to be spent on programs that might allow our apocalyptic way of life to continue apace.

[T]he agreement provides no less than $4,000,000 for modeling, assessments, and, as possible, initial observations and monitoring of stratospheric conditions and the Earth's radiation budget, including the impact of the introduction of material into the stratosphere from changes in natural systems, increased air and space traffic, proposals to inject material to affect climate, and the assessment of solar climate interventions. Within these funds, the agreement further directs [the Office of Oceanic and Atmospheric Research] to improve the understanding of the impact of atmospheric aerosols on radiative forcing, as well as on the formation of clouds, precipitation, and extreme weather.

Geoengineering is the technical term for the kind of vast, planet-wide human engineering projects that could feasibly change the planet's climate. Arguably, the creation of a fossil fuel-reliant economy constituted geoengineering, even though it was not intentional (in the sense of humans wanting to raise the portion of carbon dioxide in the atmosphere to the extent that it would cause a greenhouse effect and warm the planet). Other examples of geoengineering, mentioned in the text of the bill, could include seeding the upper atmosphere with sulfur dioxide to block some sunlight and thus reduce warming; or install a giant sun-blocking machine like Mr. Burns did in "The Simpsons." (I'm only half-kidding — while Mr. Burns' sun-blocking machine was ground-based, and extended from a hoist, there are proposals to launch spacecraft that would ascend to a high geosynchronous orbit and then unfurl a huge sunshade that would block a portion of sunlight and thus cool the Earth.)

The proposals for geoengineering are controversial in large part because of the ethics around them. There is a term in urban planning called "induced demand," used in reference to traffic lane-widening schemes, which often have the effect of only making traffic worse. The reason is that one is "inducing" demand for traffic; with more lanes, there is more incentive to drive, and thus more people do. To analogize, geoengineering can have the same effect of inducing demand: if we seed the sky with aerosols to dim the sun, then there is no necessity to change our way of life nor our economic arrangement, and we can keep spewing pollution apace. (We just have to be careful to keep spending money to spray the aerosols every few years, because that stuff dissipates.)

Lest you think for a second that this is unlike the anti-science Trump administration, you are sorely mistaken. The reason that the GOP has (historically) had a head-in-the-sand attitude about climate change is that they are a party of the rich elite, CEOs and capitalists; and the rich, being dependent on an unsustainable economic arrangement to continue to profit, don't want their subjects to realize that might be the case.

Hence, geoengineering is a means of prolonging an unsustainable economic system. Capitalism — which treats the environment like a landfill and the oxygen in our atmosphere as limitless — is clearly incompatible in the long term with the survival of life on Earth. And yet, if you are at the top and profit from this system, you are probably not going to be too apt to point that out. Better to deny climate change is happening for a while, and when things look dire, start funding geoengineering.

The US government's interest in geoengineering tells us something about how our government perceives the climate crisis. It tells us that some have conceded that to get us out of this ecological morass, we should invest in stop-gap solutions that don't actually go to the root of the problem. This is deeply cynical. It is like widening lanes, when the problem is the cars themselves.

To be clear, stopping climate change is not a conundrum that must be solved with a monetized, technological "solution" like a sunshade, or spraying aerosols in the atmosphere. We know exactly how to do it: you stop using fossil fuels, reforest the land and clean the oceans, and re-orient the economy to be based on human need rather than mindless consumption for consumption's sake. Capitalism, and its inability for considerations of the environment as anything beyond an "externality," got us into this mess; the idea that it would get us out is laughable at best, sophistic at worst.

You could theoretically mobilize vast swaths of the global workforce and give them stable, good government jobs doing this kind of thing, and then it would be over, mostly. We would have reverse-geoengineered ourselves out of the climate crisis. That scenario is preferable to 99 percent of the humans on the planet, but our economic system is not run by them; it's run by a few venal rich people who don't profit of off solving problems — they profit off of perpetuating them, and selling us the temporary solutions as subscription services.

The more cynical capitalists of our generation are actually open about their hopes to monetize the climate crisis. Take Bill Gates, for instance, who is deeply engaged in studying the climate crisis, according to all those glowing profiles about him. Oh, and also, he's invested in a geoengineering company, called Carbon Engineering, that wants to build vast carbon-capture plants. Notably, if you want to suck carbon from the air, you could also achieve this with a Keynesian Green New Deal, but that wouldn't get Gates and his lackeys rich(er) along the way, would it?

This is all to say that as the climate crisis worsens, both our government and the rich are going to be even more transparently cynical about "solving" the problem of the climate crisis. They will speak in plain terms about how the only way to fix the climate crisis is to attain huge public contracts for their for-profit companies, which will capture carbon in factories or launch sunshades or spray aerosols. Governments and their taxpayers will be expected to pay them for this privilege every few years. Op-eds in the respectable papers will agree with these reasonable-sounding billionaires and politicians about what must be done, which will involve a lot of technology and a lot of government contractors. They will frame it in ways that make it sound like we have no choice; meanwhile, the economy will continue humming as it always has, churning out disposable plastic goods and burning fossil fuels and so on. This is not merely a prediction — this is already happening. The spending bill is just the beginning.

Remember that an economic system is not merely an economic system. It is also an ideology, and a means of thinking about the world. Hence, many of the ideas we take for granted today are not innate, but are intrinsic to the reproduction of capitalism — for no dominant system can survive if no one is around to believe in the precepts that make it functional. You don't have to believe that we have no alternative merely because you've never seen anything different. We can live in a better, less cynical, more sustainable world. Indeed, some of us are already fighting for it.