David Talbot on how journalism has changed: "I wouldn't have been able to start Salon today"

Gentrification in the city by the Bay has stifled creativity, Salon's founder says in an exclusive interview 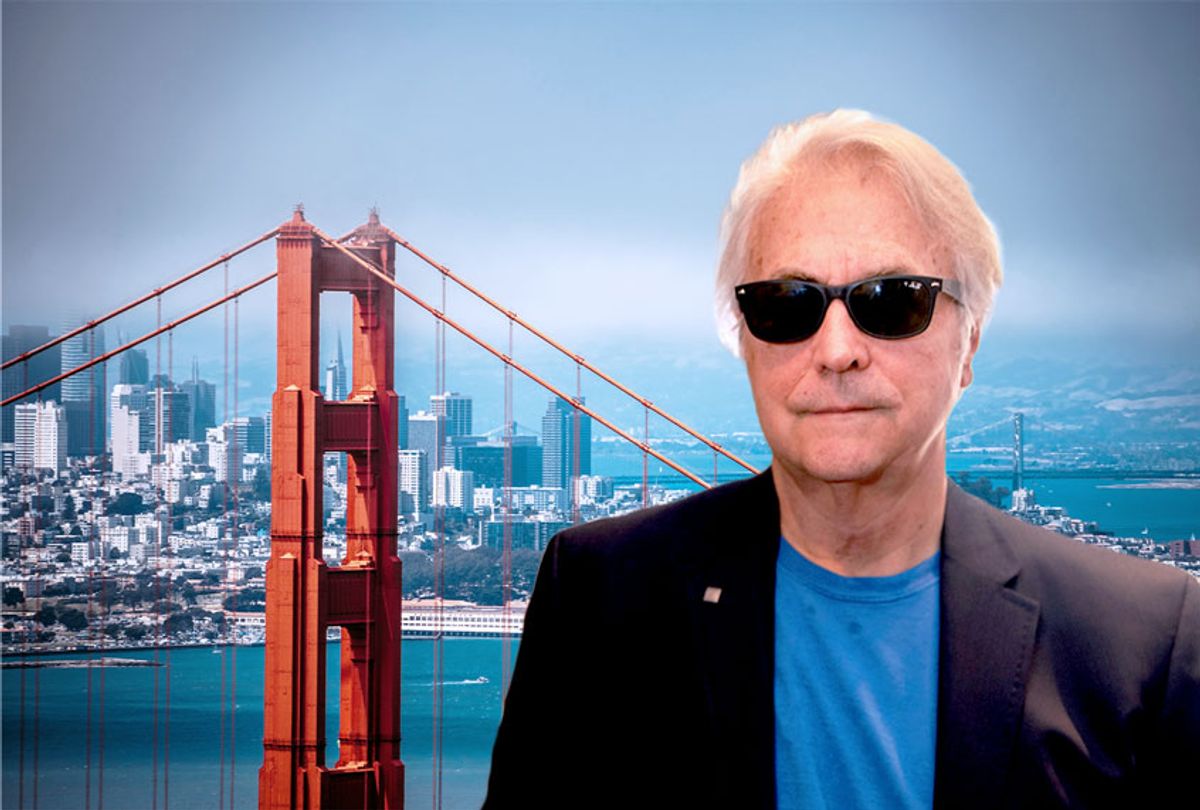 When Salon was founded in 1995, the media world was doing some serious navel-gazing. The relationship between online and print journalism was still unclear, as was the business model. Curiously, despite 25 years having passed, online journalism is still doing a lot of navel-gazing: how one makes money in a field that is necessary for democracy to function is still an open question. Meanwhile, the online ad business is almost entirely controlled by a few massive Silicon Valley corporations, whose arbitrary algorithmic changes can destroy an online news site's ad revenues overnight. At the same time, some (mostly right-wing) media personalities and politicians push the narrative that certain liberal news sources are incorrigibly evil, which drives some of their mentally ill listeners to issue death threats against journalists and sites like this one.

It would seem that the more things change in the media world, the more they stay the same.  David Talbot — author, journalist and founder of Salon — says that such existential issues plagued Salon even in the early days. In an exclusive interview, Talbot described getting death threats and bomb threats back in the late 1990s. It was, he says, just part of the larger struggle to keep an independent magazine afloat in a hostile media environment.

Talbot suffered a stroke recently, the recovery process of which led to him penning his new book, "Between Heaven and Hell: The Story of My Stroke." Unlike his previous books, which were mostly investigative tomes on divergent views of American history, "Between Heaven and Hell" is part memoir and part reflection on the journalist's life. Talbot's stroke prompted him to reflection on the journalistic profession and field; he shared some insights in an interview with Salon. Here we present the second of this two-part interview conducted by staff writer Nicole Karlis. As usual, this has been condensed and edited for clarity. —Keith A. Spencer

I think it is interesting how 25 years [since founding Salon], the narrative regarding journalism and media hasn't really changed. There's still a lot of pressure to make money. But obviously, people are in it to be creative and have a deeper sense of purpose. I'm wondering now, with all of these perspectives you have, if you have any ideas on how journalists can find balance within that? To still be creative despite the pressure to, say, get more clicks and views?

Particularly during the Clinton impeachment, we were telling a different story — we were telling the story about Ken Starr's "vast right-wing conspiracy," as Hillary Clinton put it. And that was really the crucible that made Salon — because we broke [with] the rest of the media pack. Virtually, the entire rest of the media was out to hang Clinton for what we thought was a consensual sex act. Stupid, sexist, he was an idiot. But we felt it wasn't impeachable. And we felt the people trying to impeach him would have made America even worse. Newt Gingrich and his GOP henchmen.

As I write in the book, we had bomb threats, we had death threats. I had death threats personally. My children were threatened. We had to empty the office with a bomb threat one day. It was really ugly. But what was strong throughout that was reader support. And so I'm a big believer that you have to, as a media company, develop a strong bond with your readers. A bond that's strong enough for them to pay you. I'm a big believer in subscriptions.

You write about how being Editor-in-Chief and starting Salon was super stressful. You had the heart attack scare. You were receiving death threats. Your family was being threatened, like you just said. I mean it's very stressful right now in the Trump era.

How do you suggest we stay healthy during this time?

Wow, that's a good question. I never resolved it at the time. I was in couples' therapy, as I write about, with my wife. Because our marriage was also under great stress. And Camille [Peri] worked there, so she was one of my editors. So it wasn't like she didn't understand the Salon mission. And she bought into it. But even then, she thought I was going over the edge. That I was traveling all the time. I also wore a business hat. Not just the editor, so I was always raising money. I was the face of Salon.

I felt I was helping, I was instrumental in keeping it alive. To tell you the truth, Camille was just reading that chapter again actually yesterday and she was, I think, hurt or puzzled by the fact that I didn't choose my marriage and family over Salon. It, to me, was an irresolvable conflict because I felt Salon was my family too, as I write in the book. And so, I never could balance the two. And I never found a way to de-stress my life while I was running Salon. That's why finally after 10 years, that was one reason I had to step down. I never found a way to relax at Salon.

We tried to build in joy into Salon's daily life. We had annual retreats. But that was for the staff. For myself, I was not loose and fun. I was tightly wrapped. I could never turn it off.

I thought it was really interesting how, after your stroke, the new you became more curious about quotidian life things. Like — as you mentioned in the book — grocery shopping. Whereas your old mind was more occupied with historical events. I'm wondering how this new curiosity influenced your writing process?

I was much more driven by deadlines. By journalistic cycles. Fundraising cycles. When I was running Salon, my life was all about obligation and compulsion and being an alpha male and trying to control my universe more and more. And I felt that what we were doing with Salon was really, I think, trying to take back journalism from the media and from the corporate establishment. And so it was a huge undertaking. And I felt not just driven by business needs to keep Salon alive, but also to make a point. That journalism could stand for the truth and defy convention.

And I loved it that we started here in San Francisco for that reason. New York was very shocked by Salon in the early years. And after I left Salon, it became just as important to me to rewrite American history. I was writing revisionist history. And writing about the Kennedy presidency and the CIA and so forth. And about the history of San Francisco going through all its turbulent history from the 60s and 70s. I felt these stories weren't being told right. The narrative was being deformed by people who had a stake in the status quo.

So I felt under a lot of pressure too to start making an argument and to convince people that my version of American history was correct. Now I was liberated after my stroke. I thought, I had nothing to really prove anymore. I felt at that point, I could have died because I had done everything I needed to do in my life professionally. I started Salon and ran it for 10 years. I had written three or four books that I felt really did challenge the orthodoxy about America.

Reading the book, it seemed so incongruous that you had the stroke when you were out with friends, enjoying yourself, drinking wine. But starting the book with that moment (and the stroke) really laid the foundation for us to get to know the old you. And then later you see the "new" David. So much of the book is about this "before" and "after" of the self, and the difference. Can you speak about that literacy choice?

I thought that was important, because I'm aware of the literature about suffering and cancer and death and stroke and heart attacks. And I read some of it after my own. But I was never particularly interested in human suffering before that. Because it seemed to be fairly formulaic, those stories.

You're not interested in a person's suffering unless you're interested in their accomplishments. I did think it was important to include a chapter on Salon. And to also write about how I think my version of the Kennedy assassination will ultimately become the correct one. That was a major challenge for me, to deeply investigation that assassination because — probably for you, like, 9/11 was the trauma that shaped your generation's lives. The Kennedy assassination, which happened when I was 12 years old, really shaped mine. I wanted to give people backstories on me so they could appreciate the forward story, I guess.

Looking back, would you have done anything different to find more balance?

I tried to think about when I was writing that chapter. And again, my chapter ends on this puzzled note.

I still, to this day, can't see how I could have done things differently. And if I had, I would have had to sacrifice Salon.

I don't think it would be possible to start Salon here today. That [happened] at a unique time when rents were still cheap enough where you could hire a staff and not pay them a huge amount. Although we paid competitively — we were paying, like, what the newspaper was paying people. I believed in paying people a living wage. And we paid freelancers, too, which was also against the grain online. Ariana Huffington, she famously then started what I call her "Tom Sawyer business model" of having people paint your wall for free — and say what fun it is.

[Huffington Post] didn't pay people. I guess she did later, but not in the beginning. Folks would be so thrilled to be in the Huffington Post. I believe, because I was a freelancer myself, that people should be paid for their work. I think San Francisco's too expensive now to have the kind of pool [of] marginalized talent that I drew from. Some of the people I took with me from the newspaper were already professional journalists making a living and salaried. But a lot of them were marginal, freelance writers. I liked finding these maverick, unique voices that weren't cookie cutter journalists.

David Talbot's newest book, titled "Between Heaven and Hell: The Story of My Stroke," is on sale now from Chronicle Prism books.