Barr agreed that Trump “created the appearance” that he had “undue influence” over investigations, Bolton writes 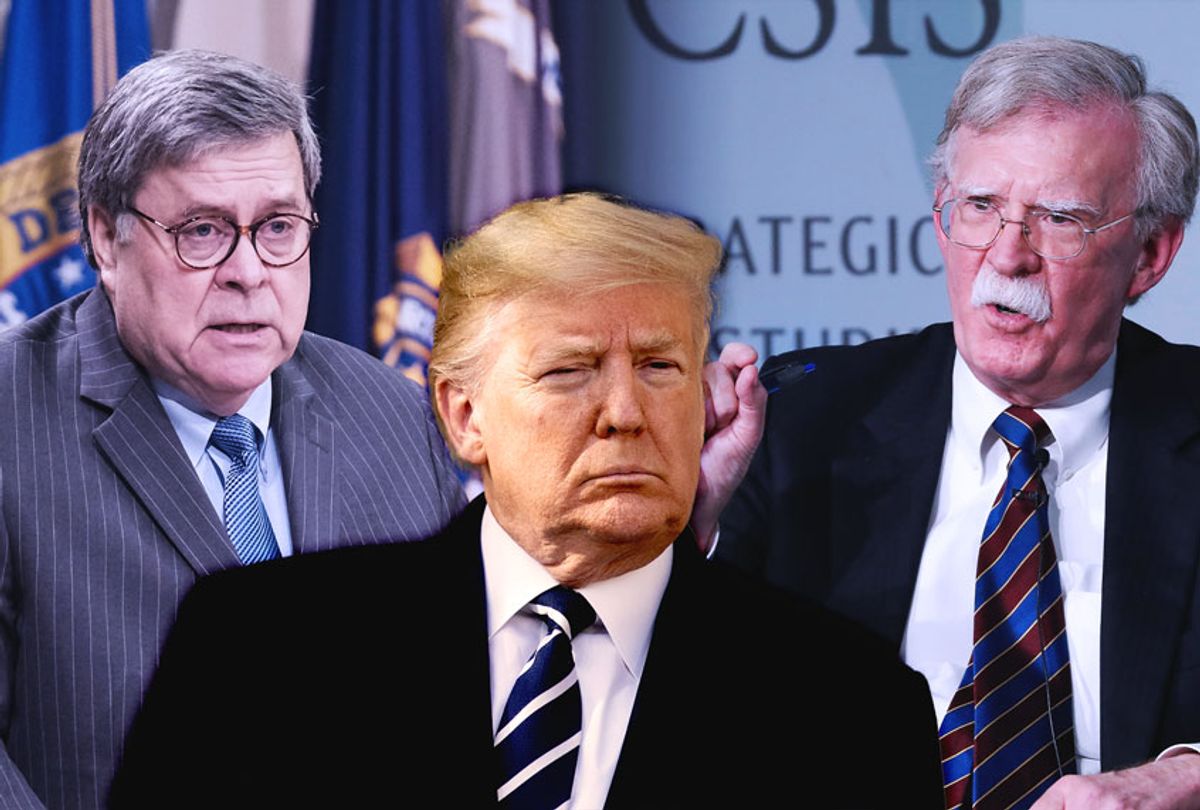 Former national security adviser John Bolton and Attorney General William Barr shared their concerns about President Donald Trump granting personal favors to the autocratic leaders of China and Turkey, according to a leaked book manuscript written by Bolton that was obtained by The New York Times.

Barr also expressed concern that Trump "created the appearance" that he had "undue influence" over Department of Justice investigations concerning China and Turkey and mentioned discussions Trump had with Xi and Erdogan, The Times reported.

The Justice Department denied the report, saying that the attorney general "does not agree" with Barr.

According to Bolton, however, Barr focused on Trump's discussion with Xi about the telecom giant ZTE, which pleaded guilty to violating U.S. sanctions on doing business with Iran and North Korea. A year later, Trump lifted the sanctions after Xi personally asked him to intervene in spite of the objections of Republican lawmakers and his own advisers, The Times reported.

Barr also pointed to a conversation between Trump and Erdogan about Halkbank, a large state-owned financial institution under DOJ investigation for alleged fraud and money laundering, according to Bolton. Erdogan pressed the president to intervene in the case, and he told the media Trump agreed to do so. The Justice Department ultimately indicted the bank in October, but the charges were reportedly "seen in part as an attempt by the administration to show that it was taking a tough line on Turkey amid an outcry over Mr. Trump's endorsement of its incursions in Syria."

Trump touted that he was a "big fan" of Erdogan during his visit to the White House last year after Trump pulled U.S. forces from the Syrian-Turkish border to allow Erdogan to invade the Kurdish-held area.

Trump similarly praised Xi after China eliminated term limits to allow him to stay in power in 2018.

Bolton's leaked book manuscript also alleged that Trump told Bolton directly that he wanted to maintain a freeze on $391 million in aid to Ukraine until they helped with investigations into the Bidens. Bolton wrote that he expressed his concerns to Barr about Trump's infamous July 25 phone call with Ukrainian President Volodymyr Zelensky, which was the subject of a whistleblower complaint and at least three criminal referrals, which the DOJ take up. The DOJ previously claimed that Barr only found out about the call from the whistleblower complaint.

Trump denied on Twitter that he told Bolton that "aid to Ukraine was tied to investigations," an action which some prosecutors say could have waived his executive privilege on the issue.

The book drew has drawn intense criticism elsewhere from the White House.

"Here's a man who purports to care about the national security of this country," White House press secretary Stephanie Grisham said Monday of Bolton. "And to leave the White House and immediately go write a book, it's really disappointing . . . We don't even know if what's in the book is going to be true."

Bolton denied to The Times that he leaked the book, and his attorney suggested that the leak came from someone at the White House. Bolton's attorneys later told NBC News they supplied the White House with a single copy for security review, and the White House apparently made numerous copies of the manuscript.

Trump's legal team has largely avoided commenting on Bolton's revelations as Senate Democrats push for the former national security adviser's testimony at Trump's impeachment trial, even as Trump vows to fight any such attempt.

"We deal with transcript evidence. We deal with publicly available information," Trump attorney Jay Sekulow said Monday. "We do not deal with speculation — allegations that are not based on evidentiary standards."

But Bolton's revelations have raised pressure on some Republicans to allow Bolton to testify.

Sen. Susan Collins, R-Maine, told reporters Monday that the manuscript's claims "strengthen the case for witnesses and have prompted a number of conversations among my colleagues."