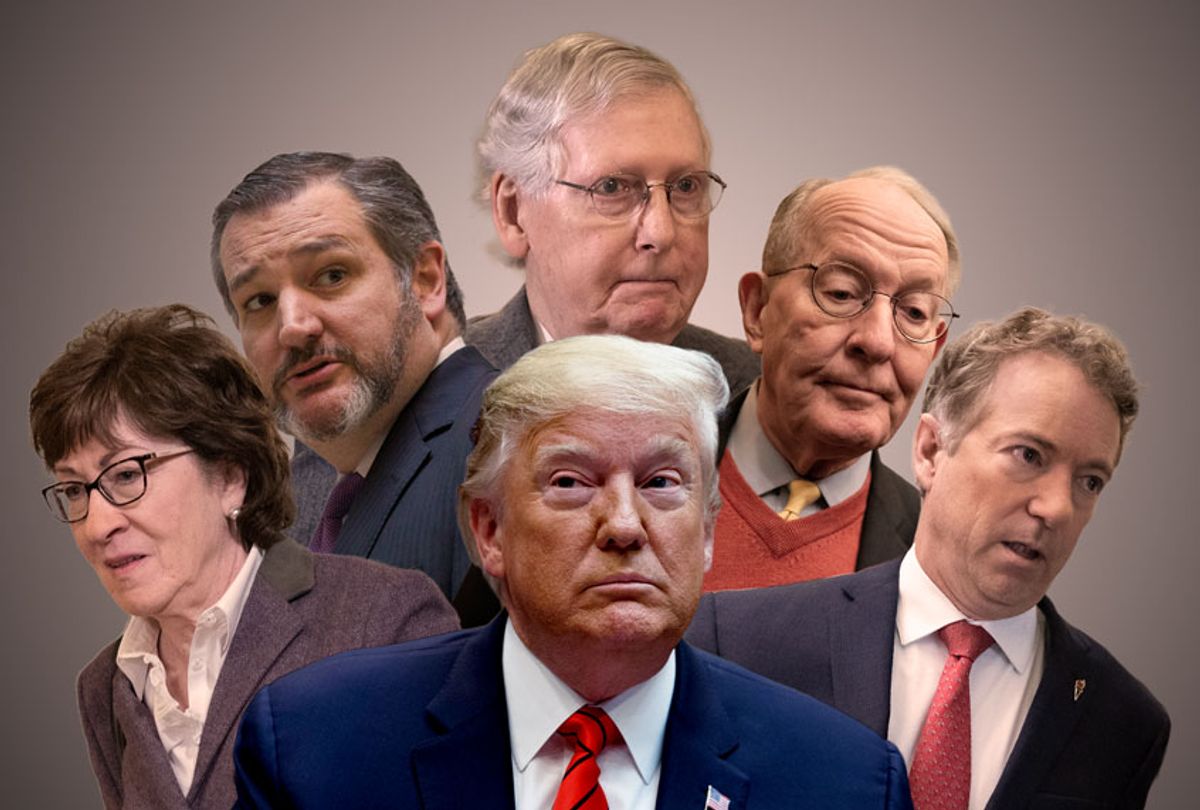 There are many theories about when it was exactly that Republicans lost their minds. Some will point out, correctly, that the strain of reality-free conspiracy-mongering that defines the Donald Trump presidency dates back at least to the era of Joseph McCarthy and the John Birch Society. Others will note Richard Nixon's reliance on the "Southern strategy," which helped remake the GOP into a white ethno-nationalist party that was capable of nominating Trump. Still others will point to the Tea Party, which was reported at the time as somehow an anti-tax movement, but now looks clearly like a panicked, racist reaction to the election of Barack Obama, and resulted in a purging of any moderate or reality-based impulses in the Republican ranks.

But whenever it started, I think it's safe to say that the upcoming votes in the Senate impeachment trial, in which the Republican Senate majority will hold tight to prevent any witnesses from testifying and will then vote to acquit Trump, will mark a point of no return for the Republican Party.

Even considering how lost to reason and reality Republicans have been for years now, there's something final and official about going on the record to register their collective belief that facts don't matter and that democracy, to them, is little more than an obstacle in the way of their efforts to maintain power.

That Republicans would pull together to turn the Senate trial into a sham aimed at covering up Trump's crimes has been regarded as a foregone conclusion from before the moment that Speaker of the House Nancy Pelosi announced the impeachment inquiry months ago. Despite this, I suspect it will be a gut punch all the same when the entire Republican Party comes together to "acquit" Trump despite the inarguable evidence that he is guilty.

They are not voting to declare the president innocent of the charges against him, since that is clearly absurd. They are voting to announce that, in their eyes, there's no limit to what can or should be done to maintain the Republican hold on power.

Sen. Lamar Alexander, R-Tenn., all but admitted as much Thursday, in a series of tweets acknowledging that the accusation against Trump — that he withheld military aid and political support for Ukraine in order to force that struggling nation's president to help him cheat in the election — "has already been proven." But Trump's behavior, Alexander claimed, was merely "inappropriate" but "does not meet the U.S. Constitution's high bar for an impeachable offense."

This is, of course, nonsense. As the constitutional expert Pamela Karlan, who testified before the House in December, argued, the founders literally created the impeachment powers to mitigate "the risk that unscrupulous officials might try to rig the election process."

Alexander openly giving his blessing to presidents using their powers of office to cheat in elections — or to Republican presidents, anyway — illustrates why the twin votes to shut down witness testimony and to acquit Trump should be understood as the consummation of the GOP's long courtship with authoritarianism.

This will be the final note of a long process in which the Republicans allowed arguments in the Congressional Record, most notably from fabled defense lawyer Alan Dershowitz, defending a president's "right" to cheat in elections, and then affirmed this belief with a formal vote.

Dershowitz is now running around, making incoherent claims that he wasn't arguing what he said he was arguing, but that hardly matters. His case for presidential tyranny was made on the Senate floor, and his attempts to claw it back in the media don't carry anywhere near the same weight.

For those of us who have watched Republicans closely throughout this process, what has been striking is the shamelessness and bad faith on display, as they have competed to be the biggest lickspittle to the wannabe fascist smearing his fake tan all over the White House.

Was it Senate Majority Leader Mitch McConnell, openly bragging about how he was coordinating with the Trump defense team to rig this sham of a trial?

Was it Sen. Ted Cruz of Texas starting a podcast about impeachment dedicated to licking Trump's shoes, despite the fact that Trump spent the election calling Cruz's wife ugly and accusing Cruz's dad of murdering JFK?

Was it Sen. Rand Paul of Kentucky using the trial as an excuse to air the name of the whistleblower who first reported Trump's bribery scheme, a move clearly meant to suggest to intimidate other federal employees out of stepping forward with information about Trump's crimes and corruption?

Was it Sen. Susan Collins of Maine working herself into an outrage over Rep. Adam Schiff, D-Calif., accusing Republicans of being a bunch of quislings who let Trump control them, even though the upcoming miscarriage of justice proves Schiff correct?

Perhaps trying to decide who is the worst of them is a little like trying to pick which cat turd in the litter box stinks most. It doesn't much matter at the end of the day. What matters is that the entire basket of Republicans is thoroughly corrupt and divorced from any concern for reality or decency, and this week they're making it official.

Why are they all so rotten to the core? The answer lies in looking at the gulf between the power Republicans have and the votes they actually get. Trump won the 2016 election because of the quirks of the Electoral College, even though Hillary Clinton got nearly 3 million more votes. In 2018, Democrats in Senate races got 12 million more votes than Republicans, yet Republicans gained seats.

Republicans have structural and geographic advantages that allow them to stave off the threat of actual democracy, but they fear that this won't last forever. As never-Trumper Evan McMullin noted on Twitter:

Republicans in the Senate are affirming and supporting Trump's schemes to cheat in 2020 for the simple reason that they believe they can't win without cheating. They've already been using legal and quasi-legal methods to cheat — tearing apart campaign finance laws, defanging the Federal Election Commission, passing voter suppression laws, wild gerrymandering schemes — but Trump has now opened that final door to outright criminal conspiracies to cheat in elections.

In 1974, Richard Nixon resigned for doing pretty much the same thing Trump did: His goons were running an illegal scheme to help him cheat in the 1972 election, and he was engaged in the cover-up. Nixon resigned not because he wanted to but because congressional Republicans, or enough of them anyway, believed that the rule of law mattered more than maintaining their party's political power. Republicans worked with Democrats to expose evidence that led to Nixon's downfall.

Nowadays, the opposite is true: Republicans are working to conceal evidence, and when they can't conceal it are arguing that it doesn't matter what Trump does anyway. In voting to block witnesses and then to acquit a clearly corrupt and criminal president, they are making it official: Cheating in elections is no crime, so long as you're on their side.

There is no turning back now. Republicans will, of course, continue to pretend they're anything but the party of corruption and cheating, but the veneer of plausible deniability has been stripped away. Their party's last vestiges legitimacy are gone, and they know it. In fact, they're voting on it in the Senate sometime on Friday.

What this means for the rest of us is still not clear. There will be an election in November, and a newly emboldened Trump will probably concoct more criminal conspiracies to cheat in it. He may very well win. If he doesn't win, it's entirely likely that he'll reject the election results and refuse to leave, launching a new and much more dangerous episode in our slow-unfolding constitutional crisis. Senate Republicans, having already signed off on his cheating, may conclude there's no reason to stop now, and find some excuse to back his illegal rejection of the election results.

There is no longer any reason to believe Republicans will balk at anything that allows them to hold onto power. I do mean anything.

How far this goes, and whether our democracy can still be dragged out of this dark pit, is still unknown. But the history books will almost surely mark the end of this sham trial as the day that Republicans, who long ago made a mockery of their historical legacy as the party of Abraham Lincoln, reached the point of no return.