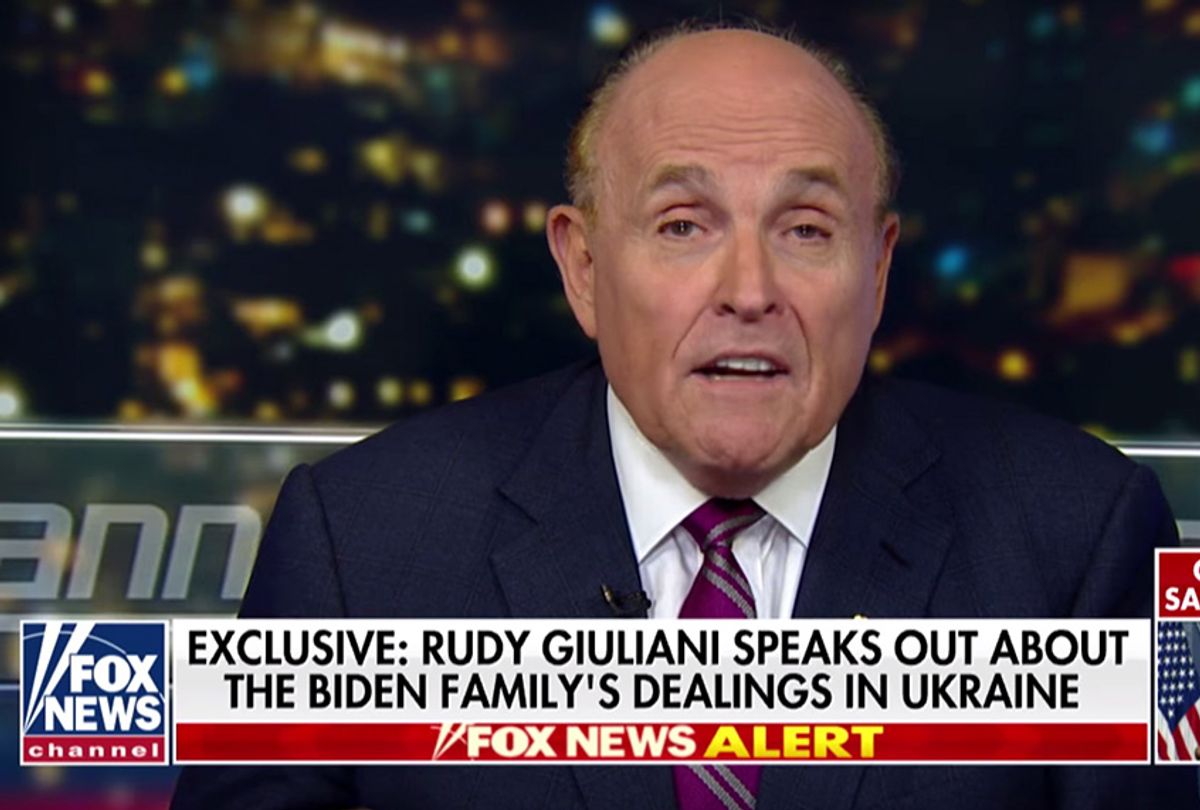 Fox News' own research team warned the right-leaning network that Rudy Giuliani, the former mayor of New York turned personal attorney for President Donald Trump, and his associates were "spreading disinformation," according to an internal briefing book obtained by The Daily Beast.

The 162-page briefing accused Giuliani and attorneys Joe diGenova and Victoria Toensing, who played a large role in the former mayor's pressure efforts in Ukraine, of amplifying and "spreading disinformation," according to the report. It also accused John Solomon, a former columnist at The Hill and frequent Fox contributor, of playing an "indispensable role" in the Ukrainian "disinformation campaign."

It highlighted Solomon's reports at The Hill, which fueled Giuliani's baseless conspiracy theory that Ukrainians meddled in the 2016 election and assisted the "smear campaign" leading to the ouster of former Ukraine Ambassador Marie Yovanovitch. Giuliani admitted that he fed information to Solomon.

Though Solomon frequently appears on the network, the briefing warned that he "played an indispensable role in the collection and domestic publication of elements of this disinformation campaign."

The disinformation campaign was aided by former Ukrainian prosecutor Yuriy Lutsenko, who harbored a grudge against Yovanovitch but later retracted some of the claims he made to Solomon and associates of Dmytro Firtash, a Ukrainian oligarch that sought assistance from Giuliani to fight corruption charges in the U.S.

Despite the briefing's warnings, Solomon has repeatedly appeared on Sean Hannity's and Laura Ingraham's shows and was even cited by Trump as the president defended himself during the impeachment saga. Solomon most recently appeared on the network last Friday.

Giuliani, who along with diGenova and Toensing negotiated several deals with Lutsenko and Fyrtash while hunting for damaging information on Trump's opponents, was criticized in the briefing for believing the claims of the two men.

The Trump attorney has a "high susceptibility to disinformation" from sketchy Ukrainian officials, the briefing said. The document added that Giuliani's indicted former associates, Lev Parnas and Igor Fruman, had "strong reported financial links to Firtash."

"Reading the timeline in its entirety — not a small task — makes clear the extensive role played by Rudy Giuliani and his associates, Lev Parnas and Igor Fruman, in spreading disinformation," it said.

"Notable are the roles of Joe diGenova and Victoria Toensing in spreading disinformation and their parroting of beneficial narratives while employed by Firtash," it added.

The pair did not disclose their ties to Firtash while defending Trump during the impeachment proceedings despite being paid $1 million by the oligarch last year, according to Bloomberg News. And the briefing warned of the couple's "non-disclosure of financial motives and representation of Firtash while spreading false and misleading stories."

It also faulted some Fox hosts for playing a role in the "amplification of disinformation stories from clearly unreliable sources and non-disclosure of conflicts by guests." For example, it criticized Hannity for billing Solomon as an "investigative reporter" when The Hill made it clear he was an opinion contributor.

The briefing also faulted Hannity for ignoring diGenova's and Toensing's conflict of interest.

"At no time during the program does Hannity, Toensing and diGenova mention who requested the statement nor do they discuss that they are Firtash's attorneys," the book said.

The network told The Daily Beast that the warnings they reported were "taken out of context." Salon's request for additional comment was declined.

"The Ukraine briefing book is nothing more than a comprehensive chronological account of what every person involved in the Ukraine controversy was doing at any identifiable point in time, including tracking media appearances of major players who appeared on FOX News and in many other outlets," Mitch Kweit, the senior vice president of the Brain Room, told the outlet. "The 200 page document has thousands of data points and the vast majority have no relation to FOX News — instead it's now being taken out of context and politicized to damage the network."

But journalists slammed the network for repeatedly featuring guests that their own researchers said spread falsehoods on the air.

"It sounds like this memo the Fox News 'Brain Room' wrote about a rampant, influential disinformation campaign would have been a great story to bring to air for their viewers," CNN contributor Amanda Carpenter tweeted. "Why was it stuffed? Hm."

Vanity Fair's Gabe Sherman, who literally wrote the book on Fox News, added that it is "amazing how Fox actively lies its audience."

You can watch one of Giuliani's interviews with Hannity here: