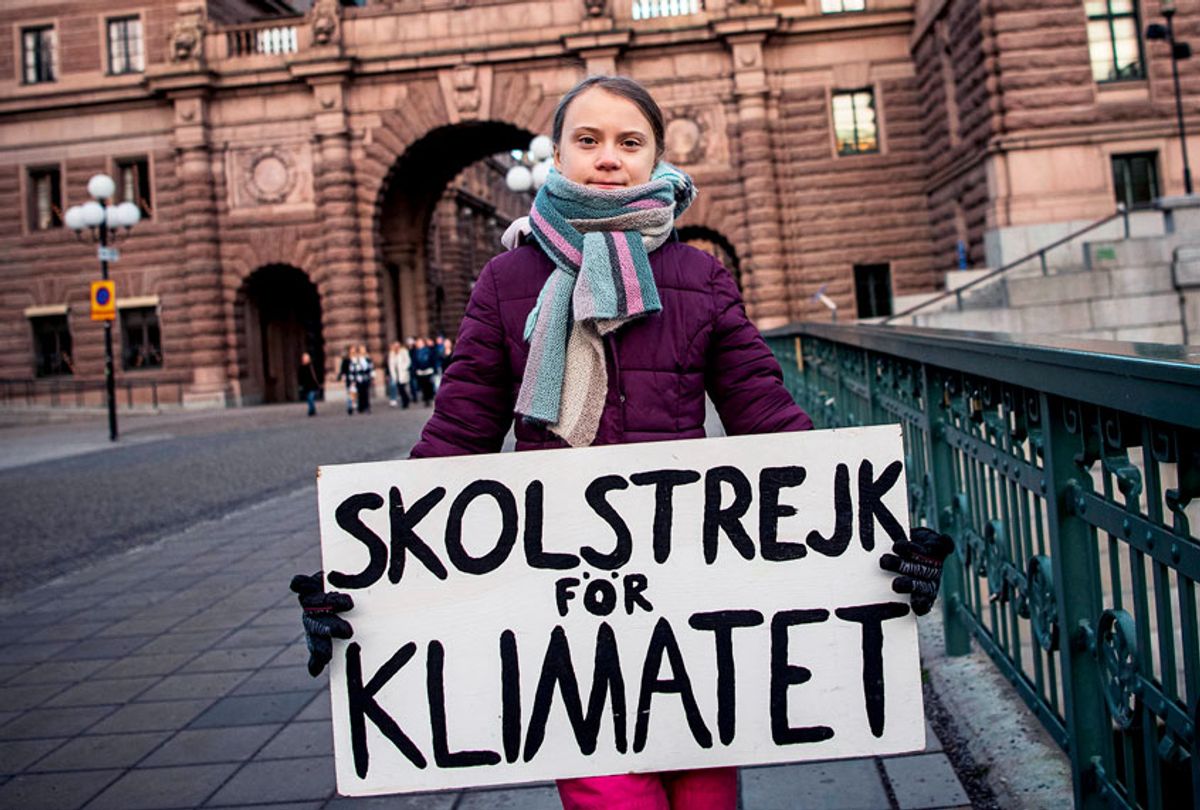 17-years-old Swedish climate activist Greta Thunberg holds a poster reading "School strike for Climate" as she protests in front of the Swedish Parliament, where she goes on school strike on January 10, 2020 in Stockholm. (JONATHAN NACKSTRAND/AFP via Getty Images)
--

BBC Studios is teaming up with climate change activist Great Thunberg for an upcoming documentary series that will chronicle the teenager's campaign to save humanity from global warming.

"Climate change is probably the most important issue of our lives so it feels timely to make an authoritative series that explores the facts and science behind this complex subject," BBC Studios executive producer Rob Liddell said during a BBC Showcase trade show on Monday. "To be able to do this with Greta is an extraordinary privilege, getting an inside view on what it's like being a global icon and one of the most famous faces on the planet."

The series will supplement footage of Thunberg's activist activities with clips of climate experts explaining the science behind her positions. In addition to covering her climate change activism, the series is also going to be a coming-of-age narrative as it focuses on Thunberg navigating through her teenage years and becoming an adult.

"I can see Greta is very happy from doing this, and I saw where she was before," her father, Svante Thunberg, revealed during an interview with BBC Radio 4 Today in December. Before Thunberg began her Swedish school strike in August 2018, Thunberg says that she had been depressed for years because of how climate change would impact the world's future. Her depression was so severe that for a time she did not speak to anyone except her parents, sister and one teacher, and did not eat "which of course was the ultimate nightmare as a parent."

Thunberg's activism has also caused her to become the subject of attacks from many conservatives, including President Donald Trump. After being chosen as Time's Person of the Year in December, Trump tweeted that Thunberg "must work on her Anger Management problem, then go to a good old fashioned movie with a friend! Chill Greta, Chill!" One month later, at the World Economic Forum in Davos, Trump answered a reporter's question about Thunberg's protest by saying "to embrace the possibilities of tomorrow, we must reject the perennial prophets of doom and their predictions of the apocalypse. They are the errors of yesterday's fortune tellers, and we have them and I have them. And they want to see us do badly, but we don't let that happen."

Trump's treasury secretary, Steven Mnuchin, also threw shade at Thunberg during the Davos summit. When asked about her climate strike, Mnuchin sarcastically asked, "Is she the chief economist? Or who is she? I'm confused."

After explaining that his comments were "a joke" meant to be "funny," Mnuchin said, "After she goes and studies economics in college, she can come back and explain that to us."

Hulu is also working on a documentary about Thunberg, tentatively titled "Greta," which is expected to premiere later this year. She was also briefly featured in an Academy Awards clip package in which she credited documentary films for opening her eyes to the climate crisis.