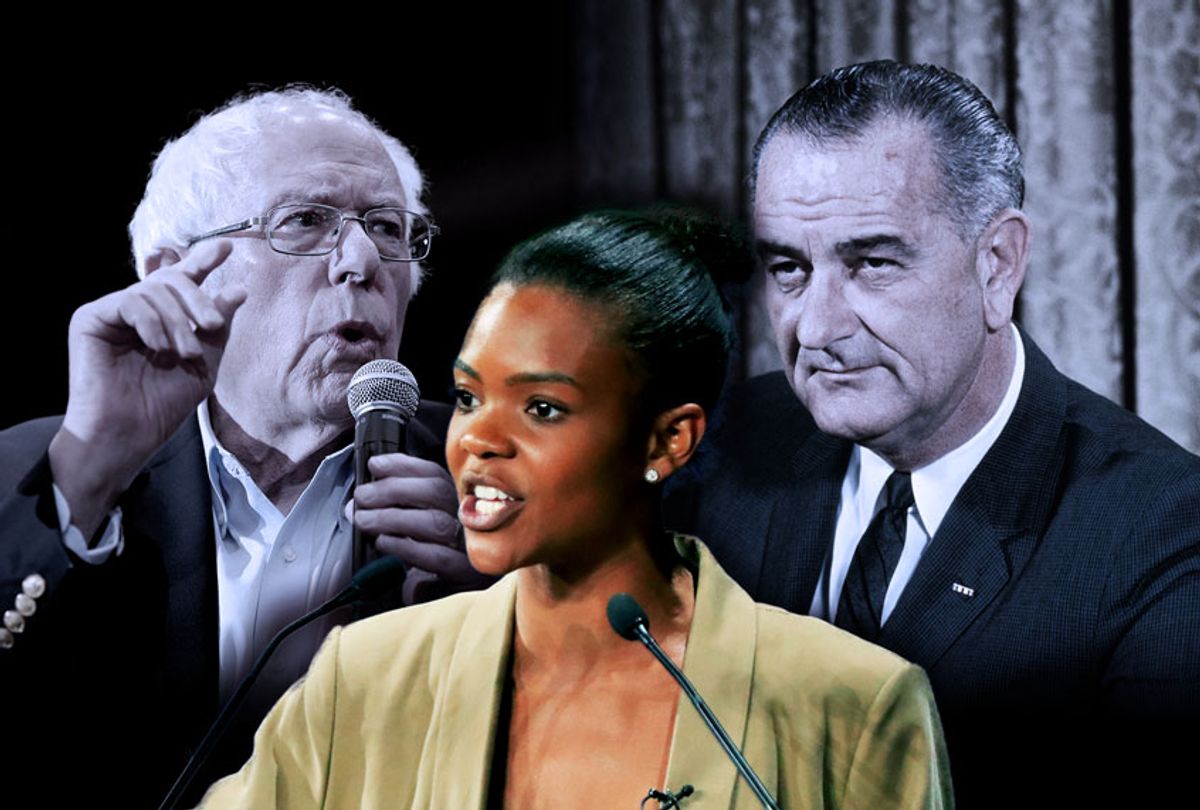 Conservative commentator Candace Owens told Fox News host Laura Ingraham on her Monday broadcast that Bernie Sanders is "the best racist on the left" as she compared the Democratic candidate to Lyndon Johnson, a president who signed landmark civil rights legislation of the 1960s.

"The good racist — the best racist on the left, by the way — is Bernie Sanders, because he pretends to be their friend. He lies to black America's face," Owens said of the frontrunner in national polls among the candidates vying for the Democratic nomination. "He knows he is going to be the one like Lyndon Baines Johnson. He's Lyndon Baines Johnson 2.0, who is going to enact policies that are going to harm black America for the next 100 years when he smiles in their faces."

Sanders famously marched with Dr. Martin Luther King Jr. in 1963. In contrast, President Donald Trump was sued by Richard Nixon's administration in 1973 for violating the Fair Housing Act. Trump has a long history of making racist comments, including promoting the racist birther conspiracy theory in 2011, defending  alt-right protesters in Charlottesville in 2017 by claiming that there were good people "on both sides" and referring to several African countries as "s**tholes."

Leo Terrell, a civil rights attorney who appeared on Ingraham's program with Owens, responded by asking: "Did she talk about Lyndon Baines Johnson . . . and the Civil Rights Act? The Voting Rights Act?"

Owens later defended herself on Twitter, writing that Johnson "only signed the Civil Rights Act because he was forced to, as President." She also quoted the former president as saying, "I'll have those n***ers voting Democrat for the next 200 years."

This is not to suggest that Johnson had a spotless record on race. Like nearly all southern legislators in the 1930s, 1940s and early 1950s, Johnson opposed most of the major civil rights bills which came before the House of Representatives (where he served from 1937 to 1949) and the Senate (where he served from 1949 to 1961). He also frequently made racist comments to colleagues and friends, as well as to black Americans.

At the same time, there is no evidence that Johnson ever claimed that he was only passing civil rights using the slur cited by Owens. That quote originated from a former Air Force One steward named Robert MacMillan, who told journalist Robert Kessler about it in the 1990s. Though MacMillan supposedly heard Johnson say those words to two Democratic governors, it has not been corroborated. MacMillan made it clear in interviews that he intensely disliked Johnson on a personal level.

Despite his racist comments, Johnson was one of the most successful American presidents in terms of pushing for and achieving civil rights for black Americans themselves. "There was a difference between Lyndon Johnson and all the other Americans who held racial stereotypes — and between Lyndon Johnson and all the presidents, save only Abraham Lincoln, who came before him and who came after him," Caro wrote in his Pulitzer Prize-winning 2002 book "The Years of Lyndon Johnson: Master of the Senate." Though Lincoln abolished slavery, Johnson gave black Americans the right to vote "and made great strides toward ending discrimination in public accommodations, in education, in employment, even in private housing."

Ironically, Johnson's achievements in civil rights contributed to the Republican Party becoming a the staunchly conservative organization it is today. Johnson's Republican opponent in the 1964 election, Sen. Barry Goldwater of Arizona, rose to prominence in large part due to his opposition to those civil rights measures. His candidacy played a significant role in turning the overwhelming majority of black voters away from the Republican Party. Goldwater's candidacy also helped bring Ronald Reagan into national prominence as a political figure, paving the way for his election to the presidency in 1980 and the so-called "Reagan Revolution," which transformed the GOP into a vehicle for modern conservatism.

Owens has aroused considerable controversy since she first began posting conservative videos in 2017 on her YouTube channel, "Red Pill Black." The former Turning Points USA employee incorrectly claimed that the so-called "Southern strategy" of Republicans pandering to racism was a myth, and she had never seen evidence of racism in conservative circles. However, the former field director of Turning Points USA had to resign after saying, "I hate black people. Like f*ck them all . . . I hate blacks. End of story."

She also falsely accused Democrats of sending explosive devices to prominent liberals, including George Soros, Barack Obama and Hillary Clinton in 2018, appeared to defend Adolf Hitler last year in comments meant to explain why she is a nationalist and was accused of politicizing the death of a college student allegedly killed by an undocumented immigrant.