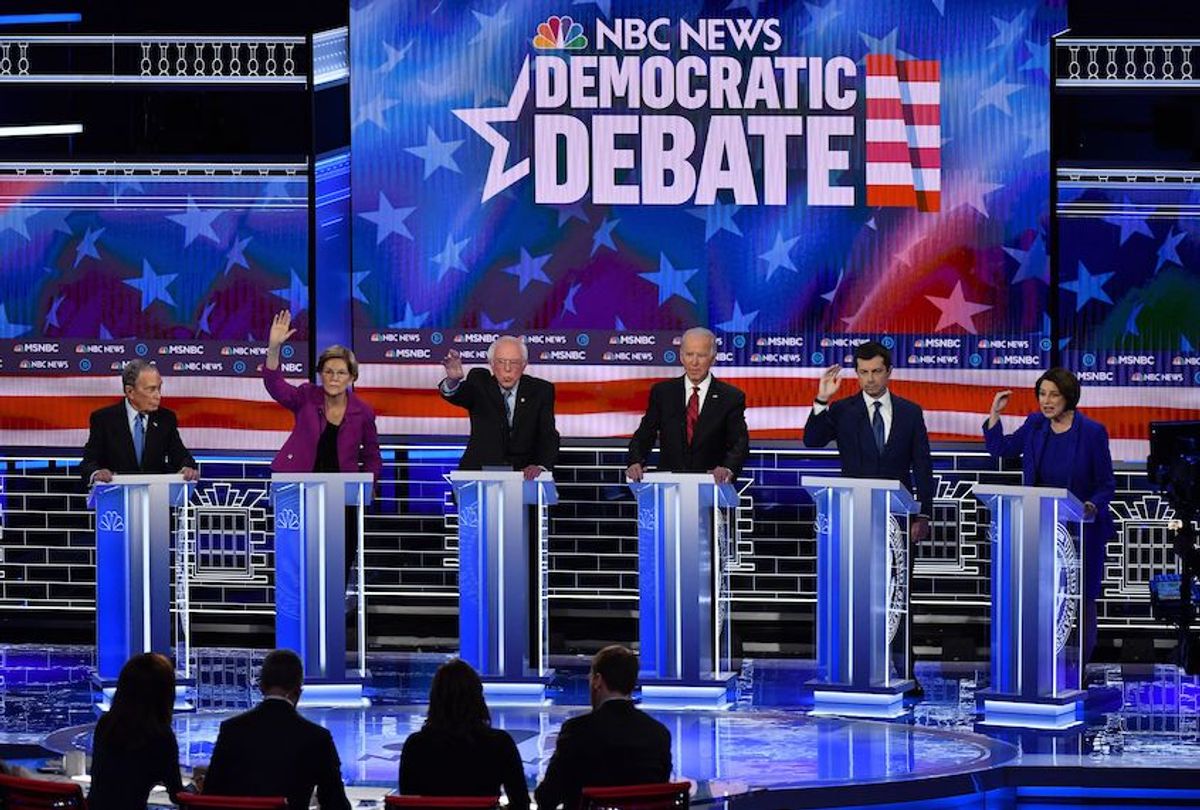 A lot of Pete Buttigieg's famously deft phrase-turning barely touches solid ground: "We must step forward into the future in order to win…. "We must galvanize, not polarize…." But one of his more-resonant cadences did touch down, blindly and wrongly, during the most recent Democratic presidential candidate debate Wednesday night in Nevada.

Right though Buttigieg is about Michael Bloomberg — clearly the "candidate who wants to buy this party out" — he's dodging a truth that Bernie Sanders (presumably the "candidate who wants to burn this party down") has been telling for years: The Democratic Party has been burning itself down, right alongside Republicans, ever since Rep. Tony Coelho of California led the Democratic Congressional Campaign Committee to embrace corporate money, big time, in the shadow of a triumphant Reaganism.

With Chuck Schumer as its Senator from Wall Street and even Rep. Barney Frank countenancing Fanny Mae's backstopping of the subprime mortgage lending that accelerated the financial crisis, and Bill Clinton signing off on repealing constraints on buccaneer "investment" banking, it was establishment Democrats, not Bernie Sanders, who took a fateful step away from balancing capital and labor as fairly as they'd balanced them from World War II through the mid-1970s.

Like too many other Americans, Buttigieg and others who've carried or tolerated this compromised record will do almost anything but face the harsh truth that Democratic leaders' betrayal of working people is part of the reason why Donald Trump is president and Sanders is running so strongly among the betrayed. The concentration of corporate and financial power that the party abetted has driven our civic and political implosion's public massacres, its epidemic addictions and declines in life expectancy, its dispossession of millions of Americans from what they thought was homeownership, its mass incarceration, its massive scapegoating of immigrants, citizens of color, and, soon — mark my words — "the Jews," and its increasingly violent, degrading entertainments.

"Ill fares the land, to hastening ills a prey, when wealth accumulates, and men decay," wrote Oliver Goldsmith in 1770. In 2010, the late Tony Judt made Goldsmith's aphorism the frontispiece of his book, "Ill Fares the Land." Democrats persisted in wordless denial.

In 2016, as candidate Trump was demolishing the Republican establishment and was on his way to demolishing the Democratic one, I wrote a long essay, "Our Politics Are Broken: How Both Party Elites Betrayed Our Trust," posted on Salon and other sites, explaining what our implosion owed to both parties' having left so many people defenseless. I got lots of push-back, including during an interview on WNYC's Brian Lehrer Show and in panicked letters and email messages from liberal Democrats, including from the wealthy progenitor of an estimable nonprofit organization and from a well-respected writer-tribune at a high-end liberal magazine. They were worried about Hillary Clinton's prospects because then, as now, the overriding need was to defeat Trump.

I, too, was uncertain that former Wal-Mart board member and Wall Street pitch-woman Hillary Clinton would defeat Trump's phony but arresting populism. I voted for Sanders in the New York primary, if only to rattle establishment Democrats' golden cage, and then for Clinton in the 2016 general election. This November, too, I'll vote for any Democrat against Trump (and against any other Republican drone who shows up on my ballot). But it's equally important that Joe Biden, Elizabeth Warren and Amy Klobuchar acknowledge harsh truths that Buttigieg and most other Democrats have finessed with bankers' and conglomerates' donations and lobbying. Democrats as we've known them since the Coelho cop-out can't hope to lead increasingly desperate Americans back to a "normalcy" that has given us little more than fine phrase-turning.