"Better Call Saul" star Bob Odenkirk: Season 5 will go "more wrong than it's ever gone" before 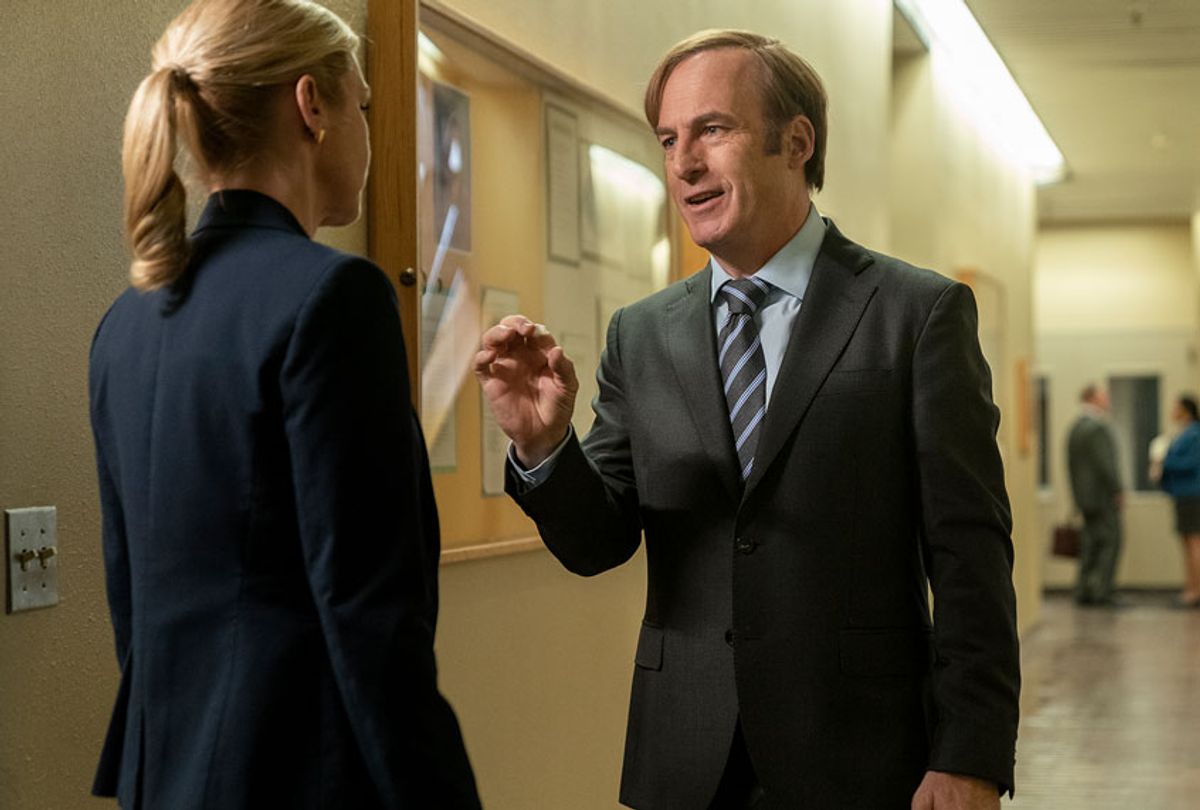 As "Better Call Saul" hits the road in Season 5, the lawyer once known as Jimmy McGill is gone, his hangdog demeanor vanished. In his place, at last, is the man we've been waiting for all these years, Albuquerque's hometown legal huckster Saul Goodman.

These new episodes mark the true beginning for Bob Odenkirk's criminal lawyer, a guy bent on succeeding at all costs even if it means offering cut-rate service to street criminals and temporarily setting up shop in a small, dirty circus tent.

That's the fun part of this story. The real darkness comes much later, projected in a black and white future set in a Nebraska mall. Reveling in the transformation from sad Jimmy into Saul – a man of pure confidence, no shame and who favors loud, cheap suits – is all good for an audience who have been anticipating the "Breaking Bad" favorite's appearance.

Parallel to this series, creators Vince Gilligan and Peter Gould keep reminding us that a much smaller and less dignified future lays in wait for our ethically bent hero. One day Saul will be an lonely Cinnabon employee named Gene hiding out in Nebraska..

Each new season of "Better Call Saul" returns us to Gene's sad, paranoid life. But as the fifth season gets underway, Gene's existential boredom and anxiety cranks up to a full panic that one suspects is a key element of the series' endgame.

AMC recently announced that the 13-episode sixth season of "Better Call Saul" will be its last, an announcement Odenkirk greeted with a cheery acceptance when it was announced in January.

"I'm happy about the way that the show progresses and now we understand, will end," the actor told Salon in a recent interview that took place at a press event in Pasadena. "That means there's going to be growth. Because it's not meant to just keep going for whatever reason it can. It needs to get somewhere."

This shouldn't be taken for a sign that Odenkirk is tired of his signature character. While he talks about "Better Call Saul," his abiding love for Jimmy, Saul, Gene, and their shared story is quite evident, as is his excitement for the other roles he's gotten to play over the last few years (including his central role in the Amazon Prime animated series "Undone").

During our spoiler-free conversation Odenkirk also lent his perspective on Jimmy's shocking turn at the end of the fourth season, in which he seemed to have hoodwinked his lover and confidante Kim (Rhea Seehorn) along with the audience, and how that twist plays out in these new episodes.

From the start this particular season, season 5, feels as if almost as if we're over the bridge between "Better Call Saul" and on the highway leading directly to "Breaking Bad."

I think so. I think we are, yeah. I didn't want to say this before, because I certainly don't want to sound at all like I'm speaking for Vince and Peter, but I think the rhythm of our show is closer to "Breaking Bad" now than when we started.

It's more like "Breaking Bad" in the way that plots move forward and the stories are interwoven and all. But maybe that's just because the stakes are higher. There's bad guys like Lalo in the world now interacting with Jimmy. You'll see.

One of the traits I loved best about Jimmy that we saw as the series began was his humanity. We still see it in Saul, in this show's version of the character, and we see it most clearly at the end of "Breaking Bad," at the point that he realizes that Walter White has gotten out of control and poisoning everyone around him. Part of me has a little bit of trepidation as to how stark the change in him will be this season. How much of Jimmy's humanity still exists?

It's still there. In a weird way I think he's a little bit more at peace with compartmentalizing himself and saying, "Look, this part of me is Jimmy, and I'm a good guy to Kim. And then this other part of me is Saul, and that's just a free-for-all, ethically. And they're two separate things, and it's okay." He's made this mental shift, he's committed to it, and his life has gotten a little simpler in a way. He feels good about that. There's a good energy to it.

And he tries to sell it to Kim, like, "This'll work great, don't you see?" Instead of feeling tortured and sometimes behaving unethically and sometimes, you know, feeling shame about that and wanting to straighten things out, he says, "I'm going to call it a character. I'm going to be that guy. I'm just going to be a bold-faced user and manipulator. And then in my personal life with you, Kim, I'll be Jimmy who you know."

One of the things that I think people connected to last season with Kim, was how she really personifies the frustrations of the person who works very hard, follows the rules, and is just completely underappreciated. And then I contrast that with a lot of what people loved about the Walter White character connected with, this whole idea of, "Look at this guy. He's getting his after being screwed over a long time. Good for him!"

Where do think people land, emotionally, with Jimmy? Do you think people connect more profoundly with him or with Saul? Aside from what we know of him already.

Well, like I shared with you, he's compartmentalized these two sides of himself, and there's almost a positivity in it. Like, all right, good. He's accepting himself. He's a little more forthright, really. There are scenes where he tells Kim, "I know what I did. I am aware of the way I was manipulative and I knew that. I did make a mistake and I'm telling you the truth. I'm telling you what happened, what I did wrong." And there's a strange positivity and a likeability to it. And I think that maybe that's connected to Saul in "Breaking Bad."

You know, Vince told me that more than a few people told him that what they liked about Saul was that he was good at what he did. Not just that he was fun to watch or that he was manipulating people, or funny and made wisecracks, but he actually was good and competent at manipulating a situation, of reading a person and getting them to do what he wanted.

I think there's a back-asswards positivity to his self-acceptance and embrace of being a bad guy. And it's fun to watch this season.

And then it goes really wrong. Really wrong. More wrong than it's ever gone. And it's brutal. It's a rough episode later in the season.

At the end of the last season when I watched it again, I really felt that the sudden heel turn at the end made me feel like, as a viewer, I'd been conned entirely from the moment that we see Jimmy at the funeral.

I don't mean conned in a bad way, but as a trick the writers played by way Jimmy's character development, the way the arc was written.

You don't think so. Why?

He did what a real actor does. He used his real feelings to play for an audience what he wanted to. So he does feel bad about his brother. He does miss his brother. He does feel so hurt and fractured that he'll never get to win his brother's appreciation because his brother's dead now. And he uses that real feeling that really devastated him. He decides mentally to use it to get these people, these judges, to empathize with him and give him his law license back. That doesn't mean those feelings aren't real. It's just like an actor who can cry onscreen or share deeper feelings and is experiencing those feelings, but they're not . . . they're using it for a reason. A purpose.

I felt like it wasn't a con job in quite the way that Kim feels cheated and tricked where she feels like, "Are all your feelings, is everything you do phony or fake? When you express your deepest sadness and fears or love or anything, do I have to suspect that you're just manipulating me? You're not really feeling those things." It doesn't mean she shouldn't be wary of him. She should. But the way I look at that scene is, it's a con, yes. But the feelings are true.

It strikes me as we're talking about this character that there's a lot that our fascination with Saul Goodman has in common with the public's attraction to Donald Trump.

No question to me. Yeah. Very similar types of people. Except that I think, what did Trump say to somebody? I think he said, "Yeah, it's all a show. I can't believe people don't know that, that they don't realize that." I forget who he said that to.

But I almost feel like Jimmy would put in a better run at the presidency.

Oh I don't know. I think Jimmy feels bad after "Breaking Bad" happens. I think he has a greater capacity for self-awareness than this real person, Donald Trump.

You clearly still have a lot of affection for this character.

Yeah, I want him to do the right thing. And I do think if you give him the months that he's stood behind the counter making Cinnabons – thinking, thinking, thinking maybe he's able to become a better version of himself. Thinking, "Look, I made this choice. I embraced my shifty impulses. I looked at life as a transaction. Every person was just a transaction, and I used people. And it didn't really work out. Maybe I've applied my skills in the wrong way."

I think he could do that. But I don't know if Vince or Peter think a person does that. I've asked them, and I'm going to ask them again. I'm going to sit down with them and talk about where this character goes, and my push is going to be that he becomes a good guy.

It certainly doesn't look like that's the way it's going as the season opens. There's a very dark feeling to the premiere.

Well, you know he's going to become Saul Goodman. And then we know he's under lot of pressure as Gene, and he can't handle it. He can't sustain it. Like, physically, that's pressure. He's having a stroke or something.

Do I sound like an LA person now? A Californian?

No, you sound like somehow that this entire experience is making Jimmy into some sort of guru.

I don't want him to be a guru! We're not ending it with the "Mad Men" thing with them meditating on a cliff.

And then creating the most famous Coke commercial in all of advertising.

Each of these seasons leaves me with a different kind of sense not only how close we're getting to  "Better Call Saul" connecting with the same territory as "Breaking Bad," but how much further Jimmy is going to evolve into Saul. So by the end of this season, what do you think people's impression will be of Jimmy and, separately, of Saul?

I think that you will see Saul as a more formidable guy than you've seen him up until now. He's always been a little bit of a cheap facade. But his anger is deeper and stronger, and his commitment to making this Saul Goodman thing work. It's not just a passing phase, like "This might work, let's try this." It's like, "I'm all in, I'm all in on being this guy in the world." And you'll see why, because of what happens to him.