Despite Trump's boasts of a "blue-collar boom," inflation-adjusted wage growth fell in 48 of 50 states 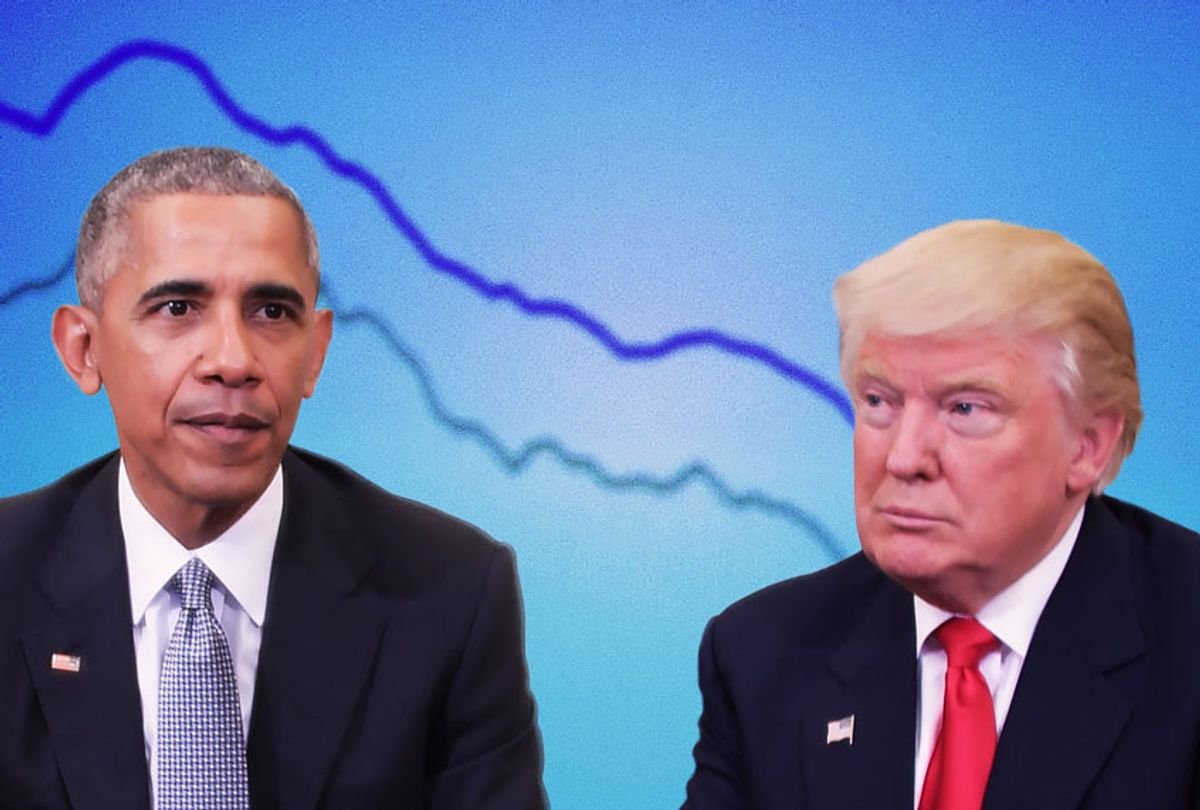 President Donald Trump claimed that his economic policies led to a "blue-collar boom" and rising wages at the State of the Union address earlier this month, yet new data shows that inflation-adjusted wage growth has fallen substantially during his first two years in office compared to the end of President Barack Obama's presidency.

Middle-class incomes grew about 5.8% per year during Obama's last two years in office before slowing to 2.7% from during Trump's first two years in office, according to a new analysis by the progressive think-tank Economic Policy Institute (EPI) and investigative news outlet Capital & Main. The income data were adjusted for inflation. All but two states saw real wages fall during that time period.

"Despite what we heard at the State of the Union, the truth is that this economy is not performing well for most Americans," said EPI President Thea Lee. "At this point in the business cycle, wage and income growth for working households should be accelerating, not slowing."

The only states that saw inflation-adjusted wage growth increase during Trump's first two years were Arizona and Louisiana.

Though presidents often "claim too much credit and take too much blame" for economic performance, senior EPI analyst David Cooper said, Obama saw higher wage growth as a result of a "prolonged low rate of inflation." But economists also said Trump "squandered" opportunities to implement policies that would spur wage growth.

"An infrastructure bill would clearly have [had] a marked impact, especially on middle-level jobs," Mark Muro, a senior fellow at the Brookings Institute's Metropolitan Policy Project, told Capital & Main. "Manufacturing is going in the wrong direction. I think there are all kinds of policy opportunities that have not been exploited."

Muro added that the ongoing manufacturing recession, the ongoing trade war, and the coronavirus could result in additional economic fallout in 2020.

Lee added that the 2017 tax cuts and Trump's deregulatory moves have also hurt the middle-class.

"The current administration's focus on cutting taxes for the wealthy, expanding tax incentives for outsourcing, and undercutting workers' rights has left ordinary working households in most states barely gaining ground," she said.

The report noted that Trump frequently cites a disputed study from Heritage Foundation fellow Stephen Moore — an adviser to Trump who was briefly nominated to a Federal Reserve position before withdrawing from consideration — to claim that wage growth has increased under his presidency. But that data included fallout from the 2007-08 recession and used data from a private firm rather than the larger Census data. "The time periods are especially misleading," wrote Washington Post fact-checker Glenn Kessler, adding that "the official census numbers do not show nearly this kind of gain under Trump."

EPI data also suggests that the wage trend did not improve in 2019.

"Employers have greater leverage to hold down wages now than they did during previous periods," he explained.

Other researchers agreed. Daniel Alpert, a founding partner of Westwood Capital LLC, told Capital & Main that the rate of "high quality" jobs was higher under Obama than it has been under Trump.

"At least under Obama, we saw some improvement" in job quality, he said, as a result of the "funding of infrastructure and other things that can actually create high-quality employment."

A wide-ranging annual study published by EPI earlier this month also showed that wage growth under Trump has particularly favored the highest-paid workers. "The biggest rewards from a strong economy are still skewed toward white people, men and high earners," Bloomberg News reported.

Despite some improvements in the economy, the wage gap between white and black workers is now worse than it was in 2000, according to the data, though local minimum wage increases have helped deliver at least some gains for lower-income workers. Pay increased at twice the rate for the lowest-income workers in states that increased the minimum wage over the last seven years compared to those that did not.

Growth rates for the top earners continue to dwarf those for everyone else. The top 5% of male earners saw a 37% wage increase since 2000, compared to a 3.4% median wage increase for the overall population.

It's no wonder then that the number of striking workers suddenly surged under Trump after decades of decline in strikes.

Indeed, the number of striking workers surged in 2018 to a "nearly twentyfold increase" from 2017, according to EPI data based on numbers from the Bureau of Labor Statistics.

The trend was fueled by teacher strikes in states like Kentucky, West Virginia, and North Carolina and cities like Los Angeles and Chicago, as well as unionized workers at companies like AT&T, General Motors, and Stop & Shop. The data did not include walkouts like the Google worker protest of the company's handling of sexual harassment, because those kinds of walkouts constituted less than one full work shift.

"Even though we are 10 years into an economic recovery and the unemployment rate is under 4%, working people are still not seeing the kinds of robust wage growth that those at the top have seen for decades," said senior EPI economist Heidi Shierholz. "The increase in strike numbers shows that workers understand that joining together in collective action remains an effective way to raise wages and benefits, and improve working conditions."

Despite the dour forecasts, it is certainly good news that low-income workers are finally seeing their pay rise. However, that has little to do with Trump or the federal government, according to a study by the National Employment Law Project (NELP), which showed low-income workers' wages were buoyed by local minimum wage increases; states that did not raise the minimum wage saw stagnant rates. Many of those increases were sparked by strikes like the 2012 walkout by fast-food employees and other workers.

"The big increase in low-wage workers' pay," NELP policy analyst Irene Tung told USA Today, "is largely the result of the fight by low-paid workers to raise the minimum wage across the country."