"Gender is at the core of this": Elizabeth Warren voters frustrated with grim Super Tuesday results 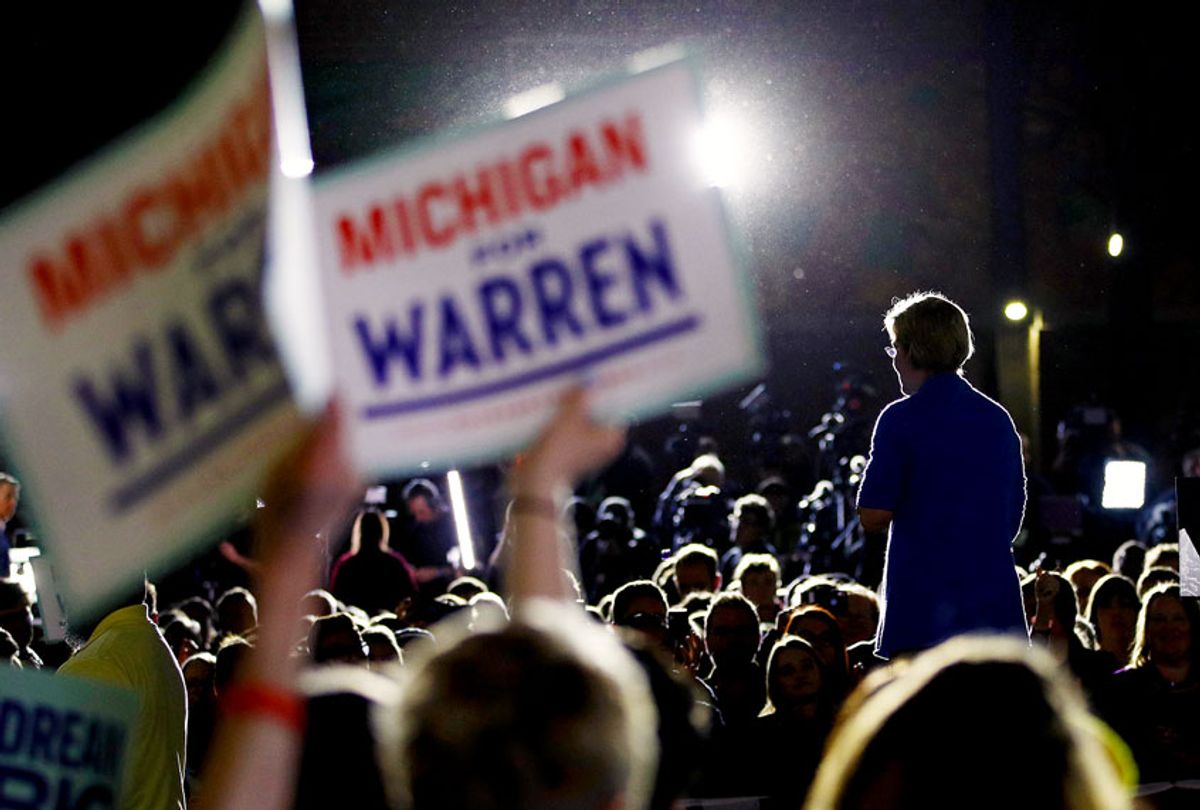 LOS ANGELES — "Vote with your heart." The mantra has been repeated often enough in reference to choosing the best presidential candidate, and 35-year-old lawyer Margaret Buckles echoed the philosophy at a Super Tuesday watch party for Elizabeth Warren supporters held at Highland Park gastropub The York.

"Vote your heart, vote for the person that inspires, vote for the person you think has the best policies," she told Salon. "If there's something about them that excites you vote for that. I think voting for the most 'electable' person is folly. So many of us didn't think our current president was remotely electable."

A noble sentiment. Unfortunately, the Happy Hour chalkboard sign outside The York also foreshadowed the risk: "Go vote, then come drink your fears into submission."

And so Warren supporters should have been forewarned on Super Tuesday as the increasingly disappointing results for their candidate trickled in. Mere minutes after the polls in California closed, the race was called in Bernie Sanders' favor.

Losing California to Sanders hurt, but losing so many other states – including Warren's own state of Massachusetts – to Joe Biden was just tragic. The watch party wasn't so much a party as a loose gathering of people, some wearing Warren shirts, some confused about where the party was. The overall feeling was subdued.

Actress Sara Gorsky, who wore a t-shirt emblazoned with "AND YET WE PERSISTED," appeared to be frustrated more than anything. As a volunteer captain, she had dedicated hundreds of hours to the Warren campaign in Los Angeles.

"We all put in a lot of work. We just feel proud about standing up for the candidate we believed in," she said. "We've been organizing for the last year, so we've been tabling at farmers markets and we've been hosting debate watch parties, we've been canvassing and we've been knocking on doors and making phone calls and texts banks for the better part of a year because we believed in her."

Early votes (by mail and in person) very well may have contributed to Sanders' California win, but earlier in the day, voters still showed up in droves, many standing in lines that wrapped around the block.

Buckles' friend Karina Contreras, a 35-year-old architectural designer, took advantage of the new Voter's Choice Act, which allowed her to cast her ballot at any voting center in her district. That allowed her the flexibility of voting in Chinatown where she works.

Contreras was drawn to the progressive candidates, and attended rallies for both Sanders and Warren to help her decide her primary vote.

"In the end, I think I felt like I didn't necessarily want all the bells and whistles that came with Bernie in the presentation. He puts on a production, and she was more subdued and maybe not as much celebrity involved," she said.

"I felt that she had a really strong message, and I wanted to support that. I didn't expect her to necessarily go into the Latino struggle, but she ended up talking about that [at the rally] last night . . .  She had a great narrative of people coming together and unionizing and making a change. And you know, that again, Bernie probably has very similar take on things, but I just love the way she delivered it."

How the candidates have been appealing to non-white votes has been seen as one predictor of how the race could be won. While Sanders typically has won the Latinx vote, the media points to Biden's appeal to black voters earning him the love of the Southern states. Warren has had a platform for diversity, but stumbled early on in her claim to Native American heritage and navigating the fallout.

"She did make mistakes," Gorsky conceded. "I don't think she made more mistakes than any other candidate. But better than any candidate, she always acknowledged her mistakes. And she doubled down on making it right, especially with minorities, especially in the communities where it means the most. And I still think she's the best candidate for the job."

In particular, the Warren campaign reached out to Asian American and Pacific Islander voters. Jeff Yang, a 52-year-old journalist for CNN Opinion and co-host of the Asian American culture podcast "They Call Us Bruce," was contacted when Warren first came to town for the Los Angeles Democratic debate. He was so moved by the way she spoke that he helped organize an AAPI endorsement list.

Yang cast his ballot for Warren the same day he received it in the mail.

Despite all the passionate mobilization and belief in Warren's leadership qualities, she still couldn't win any of the states. And no amount of late voters who were still in line long after the polls closed would likely change that. It's a demoralizing result, and one that once again questions America's regard for women in positions of power.

After the California primary results were called, Yang spoke to Salon on the phone, in a call punctuated by heavy, discouraged sighs.

"We had all that this time, right?" said Yang. "And it looks like America is not going to elect her, which really comes down to me, to a recognition that whatever we want to claim, gender is at the core of this. It may not be deliberate. It may not be that people outright say they cannot imagine supporting a woman or having a woman president. But when the going gets tough, when there's concern about electability, when there is a push-comes-to-shove around priority, things still seem to line up the same way. And that soft bigotry, that soft filtering, that consistently I think serves as the toughest of glass ceilings for women to raise."

Gorsky also holds this belief. "I think that she faced an enormous amount of sexism and misogyny that's inherent in the system and in everyday voters still in America, which is hugely disappointing to me," she said. "I think the media painted a picture of a candidate who 'couldn't do it' and couldn't be elected. It breaks my heart that the media sent that message and that Americans seemed to receive it."

At this point, Warren's campaign hasn't indicated plans for her to drop out of the race. In the past, she had mentioned that she intended to continue.

Contreras admires how Warren is "sticking it out," while both Gorsky and Buckles would love to see whoever won the nomination add Warren to the ticket.

"She would be amazing. I mean, she does a great job with the Senate. She could really do great things as a secretary," said Buckles. "Obviously, her experience in consumer protection and experience doing financial regulation, I think is invaluable. I really hope that this is just another stepping stone for her."

Yang doesn't speculate on the particulars of Warren's future, but feels that his candidate of choice won't let him down, despite the primary results.

"We don't know where the ultimate craziness this election will take us. I do believe that regardless of who is in office next, over the next four years, Warren will actually has been a profound difference maker," Yang continued. "And I don't regret for a second that I supported and continue to support her. I only wish that there were more of us who were willing to take that critical risk."