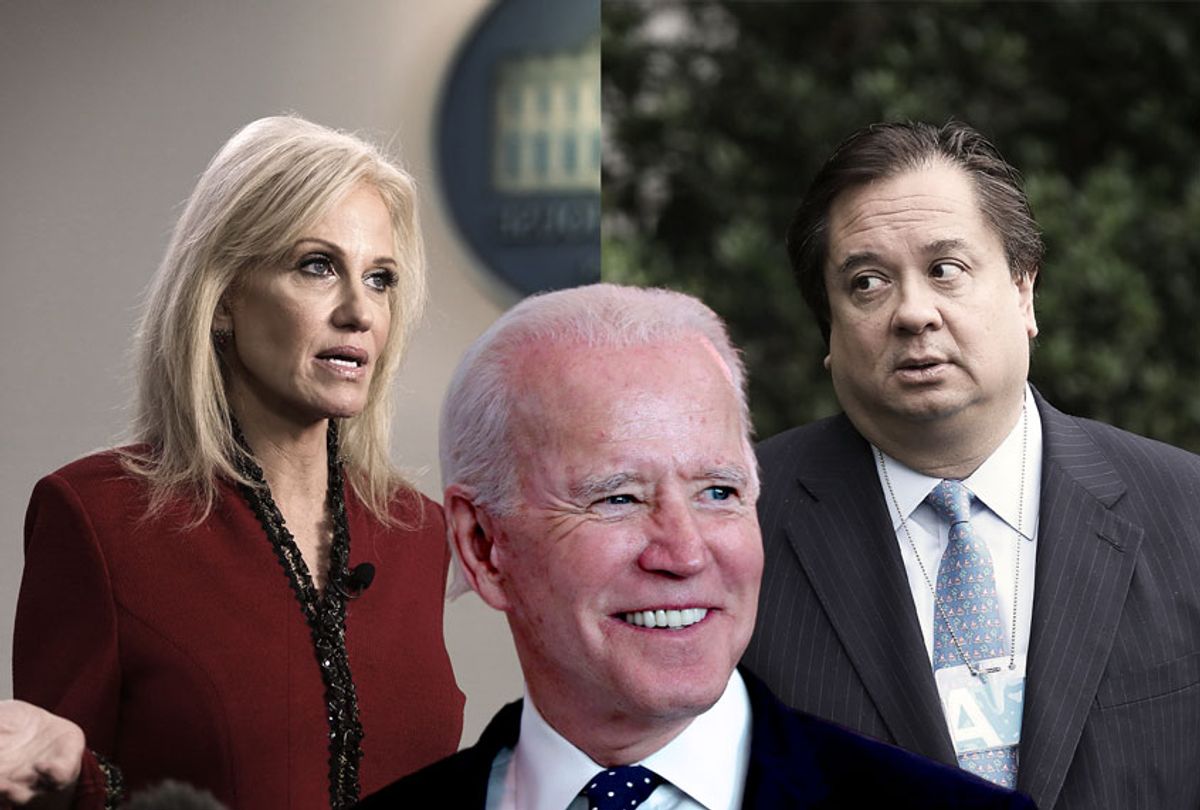 Conway tweeted Tuesday evening that he gave $2,800 to Biden's campaign, which is the largest amount an individual is legally allowed to contribute during the primary season. He also retweeted posts by New York Magazine journalist Olivia Nuzzi quoting him as saying that "the nation can't afford four more years with a megalomaniacal moron in the White House."

Nuzzi also wrote that Conway initially tried to donate $5,600, "but the website wouldn't take it. They need to change that." Conway's comment referred to how the $2,800 limit applies to individual election cycles, so he could have donated to both Biden's primary and general election efforts.

Conway retweeted a tweet from MSNBC host Joe Scarborough that said, "We are starting to understand why Trump has been so scared to run against @JoeBiden. The turnout in Virginia and the suburbs was massive tonight. The turnout of black voters for Biden is also surprisingly strong."

Conway also shared a tweet from New York Magazine columnist Josh Barro that joked, "It was clever of Biden to let Sanders get an early lead so Sanders would go on record that whoever has a pledged delegate plurality should get the nomination."

Biden again emerged as the Democratic frontrunner after he won the series of major primaries on Tuesday night. Biden benefited from a big boost after he decisively won the South Carolina primary Saturday and received endorsements from two of his chief Democratic rivals, former South Bend Mayor Pete Buttigieg and Sen. Amy Klobuchar of Minnesota, over the subsequent days.

Though Conway identifies as a conservative, he has harshly criticized President Donald Trump on a number of occasions. Conway wrote last month that Trump should be impeached for firing U.S. Ambassador to the European Union Gordon Sondland, Lt. Col Alexander Vindman and Lt. Col. Yevgeny Vindman after the president was acquitted in a Senate impeachment trial.

Conway also wrote in July that Trump was "racist to the core" for saying that Democratic Reps. Alexandria Ocasio-Cortez of New York, Ayanna Pressley of Massachusetts, Rashida Tlaib of Michigan and Ilhan Omar of Minnesota should "'go back' to the 'countries' they 'originally came from.'" And he formed a group called Checks and Balances in 2018 for conservative lawyers who oppose the alleged constitutional violations of the president.