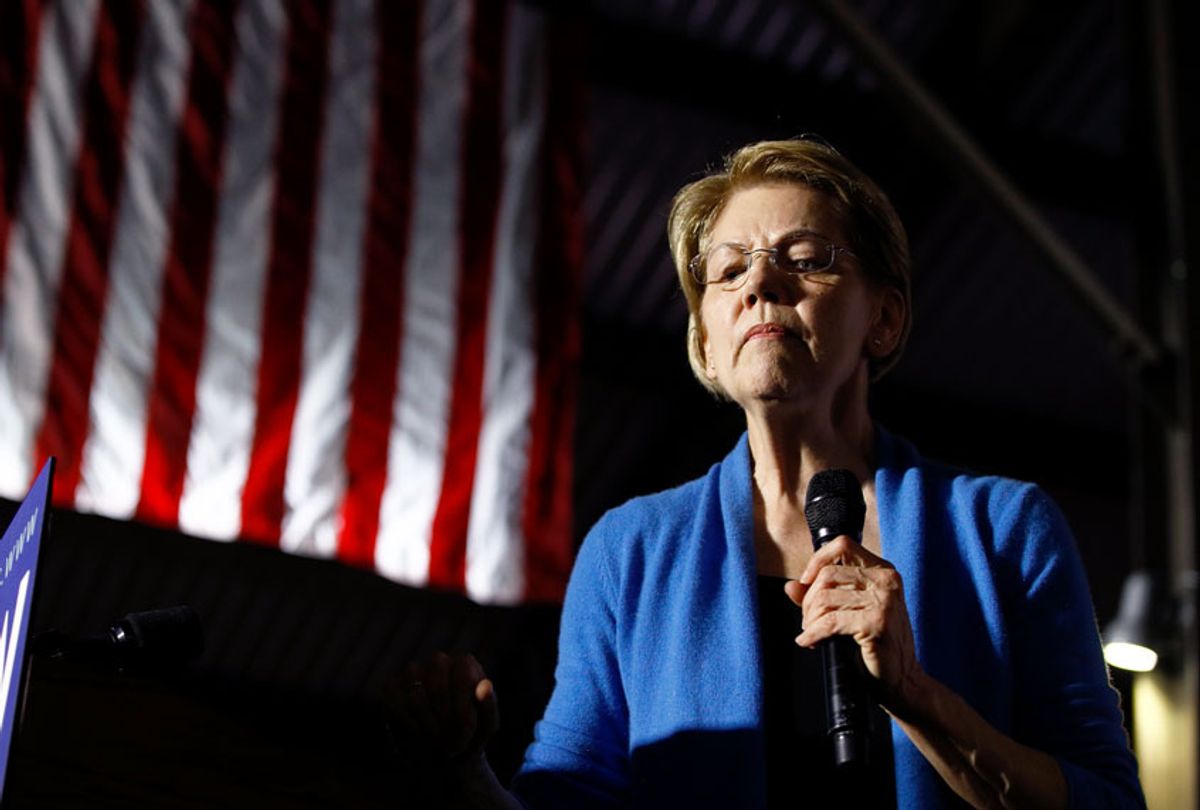 Sen. Elizabeth Warren, D-Mass., suspended her presidential bid Thursday after failing to finish as one of the top two contenders in any state on Super Tuesday.

"I will not be running for president in 2020, but I guarantee I will stay in the fight for hardworking folks across this country who've gotten the short end of the stick over and over," Warren told reporters outside of her home in Cambridge. "One of the hardest parts of this is all those pinky promises and all those little girls who are going to have to wait four more years. That's going to be hard . . . I take those pinky promises seriously."

Despite exiting the race, Warren declined to make an endorsement.

"Not today," she said. "I need some space around this and a little time to think a little more."

Warren said she ran for president because she did not believe critics who argued that there was only a "moderate" lane and a "progressive" lane.

Both former Vice President Joe Biden and Sen. Bernie Sanders, I-Vt., who have courted her endorsement, praised Warren upon her exit.

Biden called Warren "the fiercest of fighters for middle-class families."

"Her work in Washington, in Massachusetts, and on the campaign trail has made a real difference in people's lives," he tweeted. "We needed her voice in this race, and we need her continued work in the Senate."

Sanders said Warren "has taken on the most powerful corporate interests because she cares about those who have been left behind."

"Without her, the progressive movement would not be nearly as strong as it is today," he added on Twitter. "I know that she'll stay in this fight and we are grateful that she will."

Warren, who ran on a progressive platform that included Medicare for All and a wealth tax, finished third in her home state of Massachusetts and failed to reach the 15% viability threshold needed to win statewide delegates in 9 of the 14 states that voted on Tuesday. Weeks earlier, Warren's campaign vowed that she was "poised" to finish in the top two in eight states. Warren did not finish above third place in any contests before Super Tuesday, either.

Warren's campaign, which briefly surged to the head of the Democratic field in 2019 before her numbers deflated, acknowledged in a memo Sunday that her path to the nomination likely involved a contested convention. But with just 47 pledged delegates as of Wednesday morning, Warren trailed both Biden and Sanders by more than 400 delegates.

Warren ran as a progressive alternative to Sanders, arguing that she could win over voters and move legislation that he could not. But Warren's revised Medicare for All proposal soured some Sanders fans, many of whom later criticized her after her friendship with the Vermont senator was upended by her allegation that he privately told her a woman could not beat President Donald Trump. Sanders has repeatedly denied that allegation.

But Warren never meshed with the more moderate candidates in the race, either. She excoriated former New York Mayor Mike Bloomberg at the most recent two debates and slammed candidates like Pete Buttigieg for raising money from billionaires in wine caves. Her takedown of Bloomberg likely contributed to his decision to suspend his presidential bid Wednesday despite sinking more than $500 million into his campaign.

Warren's campaign pumped out policy after policy, at one point adopting the motto, "Warren's got a plan for that." Along with her version of Medicare for All, Warren issued proposals to cancel student debt, fight climate change, raise wages and provide free childcare. Perhaps her boldest proposal was a 2% wealth tax on assets over $50 million, which she argued would finance most of her other proposals.

As her numbers waned, Warren dropped her longstanding opposition to a super PAC, allowing an outside group to buy millions of dollars worth of ads ahead of the Nevada caucuses and South Carolina primary. She failed to reach double-digits in either contest.

Her campaign acknowledged that the Super Tuesday results fell well short of their hopes.

"Last night, we fell well short of viability goals and projections, and we are disappointed in the results," campaign manager Roger Lau said in an email to staffers. "We're still waiting for more results to come in to get a better sense of the final delegate math, and we also all know the race has been extremely volatile in recent weeks and days with front-runners changing at a pretty rapid pace."

President Donald Trump tried to use Warren's frayed relationship with Sanders to troll Democrats on Wednesday.

"So selfish for Elizabeth Warren to stay in the race. She has Zero chance of even coming close to winning, but hurts Bernie badly. So much for their wonderful liberal friendship. Will he ever speak to her again? She cost him Massachusetts (and came in third), he shouldn't!" he wrote on Twitter. He later added that Sanders would have "easily won Massachusetts, Minnesota, and Texas" and other states if Warren was not in the race.

Warren's departure leaves Rep. Tulsi Gabbard, D-Hawaii, as the only other Democrat still standing in the battle between Biden and Sanders.

Despite failing to qualify for any recent debates and barely making a dent in most of the primaries thus far, Gabbard did not seem eager to drop out after winning her lone delegate in American Samoa.

"We're continuing to draw large numbers of people who are really hungry for the truth, for strong leadership and a candidate that's raising the issue that I am," she told reporters Tuesday, before the Democratic National Committee announced it will raise the debate qualification criteria, likely keeping her out of the debate once again.