Market patriotism returns — and asks workers for a blood sacrifice

Just like after 9/11, the Right is telling Americans that patriotism and economic activity are synonymous 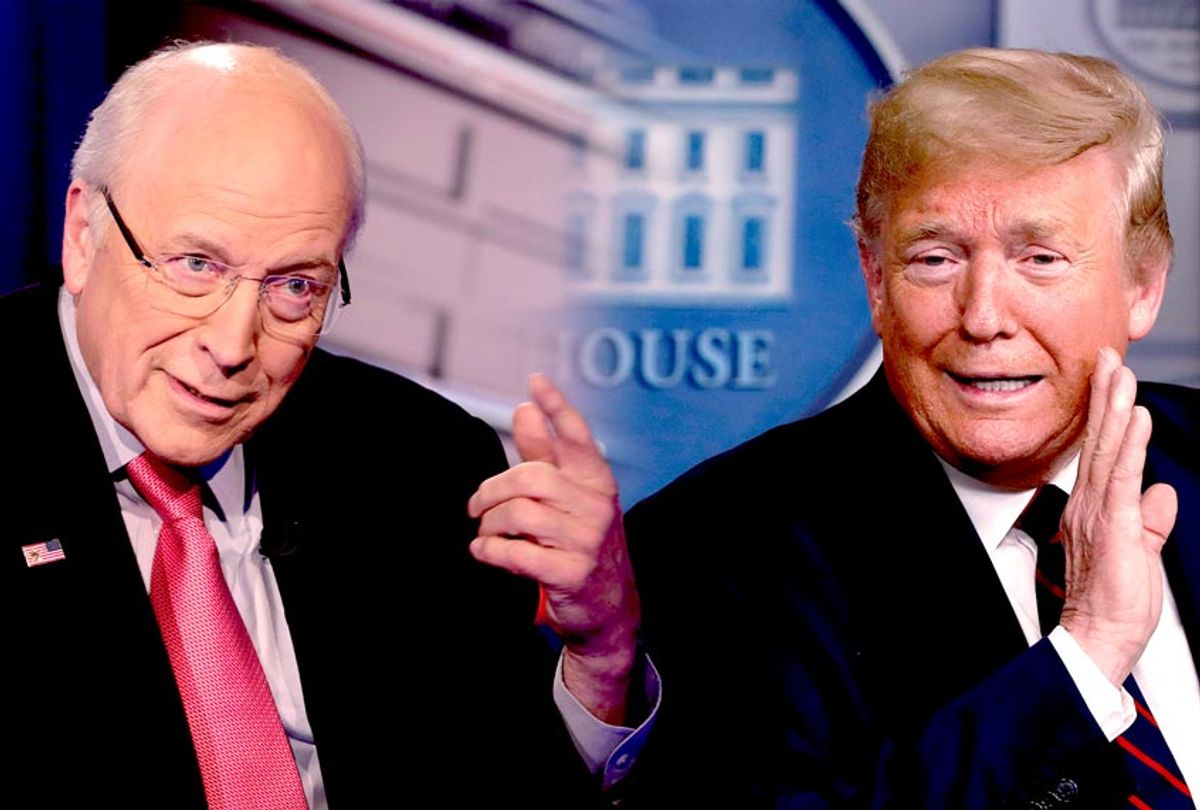 In the days after the September 11th attacks, President Bush, Mayor Giuliani and a variety of other politicians sought to soothe the ailing American psyche. They spoke publicly with a mixture of mourning and resolve. "Even grief recedes with time and grace," Bush told the nation in his State of the Union speech.

Shortly thereafter, the nation's leaders turned their efforts toward soothing the ailing American stock market. In a September 23, 2001 Washington Post column, former US Secretary of Labor Robert Reich noted the peculiarity of Vice President Dick Cheney's plea for Americans to "stick their thumb in the eye of the terrorists and… not let what's happened here in any way throw off their normal level of economic activity." Reich dubbed this ideology "market patriotism": the notion that "we demonstrate our resolve to the rest of the world by investing and consuming at least as much as we did before." He noted the irony that during World War II, Americans had been asked to curb their consumption habits, but in 2001, "our patriotic duty seems to be to buy more and save less."

Today, with the stock market once again devastated by a disaster, market patriotism is back. The social distancing rules prompted by the coronavirus pandemic have brought our economy to a standstill for two weeks now, and so the American consumer is once again being drafted into a rescue mission. President Trump briefly wanted the country "opened up and just raring to go by Easter," despite the fact that lifting shelter-in-place and other social distancing measures would almost certainly contribute to hundreds of thousands of otherwise preventable deaths. Though Trump has more recently come to grips with the need to continue social distancing through April, it remains clear that the Right is still gearing up to send workers and consumers back into the fray before it is safe to do so.

Lloyd Blankfein, senior chairman of Goldman Sachs, tweeted that although efforts to flatten the curve are sensible "for a time," "crushing the economy, jobs, and morale is also a health issue." Texas Lieutenant Governor Dan Patrick said on FOX News that "as a senior citizen," he was "willing to take a chance" on his own survival in exchange for getting Americans back to work and saving the economy for his children and grandchildren. And Glen Beck said that he "would rather die than kill the country."

It is worth noting, of course, that Trump on his own cannot order anyone back to work—state governments, civil society, and business owners are the ones making most of these decisions. Nonetheless, if Trump and his ilk have their way, we'll all go back to work — and back to shopping and spending and pumping dollars into an economy that badly needs the revenue, or at least, badly needs enough revenue to convince investors to pump up stock prices again. If that happens, millions of Americans will die, and the GOP appears increasingly to be okay with that.

The September 11th attacks killed 2,605 Americans. Since that day, we've been told again and again that avoiding another 9/11 justifies almost any expense. No military misadventure or domestic security scheme has been too extreme or too costly. One study from Brown University put the cost of our wars in Afghanistan, Iraq, Syria and Pakistan at over $6 trillion since 2001. All of this has been enacted in the name of 2,605 lives lost, and to resounding cries of "never again."

As of April 1st, more Americans have already been lost to COVID-19 than died in the September 11th attacks. Yet many on the right Right have been cavalierly suggesting that the coronavirus has been overhyped because only two percent of those infected die from it. This was the claim made recently by Rush Limbaugh, though he did not acknowledge that such fatality rates would leave millions of Americans dead. After months of downplaying the threat posed by the virus, Trump himself is now saying that keeping the death toll below 100,000 would be "a very good job." It seems unfathomable that the same country that so radically revamped its domestic security systems and that embarked on a doctrine of "preemptive war" around the world as a response to 2,605 American deaths could suddenly fail to care about the prospect of hundreds of thousands of American deaths (or more).

The enormous stimulus bill, signed into law last week with the near-unanimous support of Republicans and Democrats in Congress, further illustrated these principles. Despite the fact that most reporting lists its price tag at a whopping $2 trillion, the real cost is likely to be closer to 6 trillion — the Federal Reserve is going to be able to lend an additional $4 trillion to major corporations, on top of the $500 billion or so in direct bailout funds that has been more widely reported on.

The effects of the bill will be devastating for workers, the middle class, and small businesses. According to critics like Matthew Stoller, this bill gives Wall Street the ability "to go shopping for businesses in trouble. We could see the mother of all roll-ups, as small and medium sized businesses desperately try to get whatever they can from deep-pocketed private equity investors and monopolists. If that happens, America could look like a very different country after this pandemic is over."

And as David Dayen put it in The American Prospect, "this is a rubber-stamp on an unequal system that has brought terrible hardship to the majority of America. The people get a $1,200 means-tested payment and a little wage insurance for four months. Corporations get a transformative amount of play money to sustain their system and wipe out the competition."

Market patriotism used to mean that average citizens were urged to keep spending during periods of uncertainty. Now it demands blood sacrifice. Our leaders want us back to work, getting sick, and if need be, dying to please the market. They want to throw us crumbs while further enabling the consolidation of the economy in the hands of an ever-smaller group of ever-larger corporations. Though the outsized influence of billionaires and big corporations was a source of heated discussion during the Democratic primaries, this bill is a triumph for the ultra-wealthy financiers who already control so much of American life.

In the end, Americans all know that we have suffered and sacrificed too much for the market already. It doesn't have to be this way. Those who can continue to stay home must do so. But we must also stand in solidarity with those who don't have a choice — we must refuse to order from Instacart and Amazon, whose workers are now on strike for better wages and working conditions, and support other labor actions in the future. We must do what we can to help each other, and to protect ourselves. Our leaders, and the market they serve, will certainly not protect us now. They never really have.

Timothy Recuber is an Assistant Professor of Sociology at Smith College, and the author of the book "Consuming Catastrophe: Mass Culture in America’s Decade of Disaster." His work focuses on the mass media's representation of death and disaster, and his research has been published in journals such as New Media & Society, the American Behavioral Scientist, Research Ethics, and Contexts. Find him on Twitter @timr100.