As the pandemic decimates the economy, speculation abounds that the US may be due for an unprecedented labor action 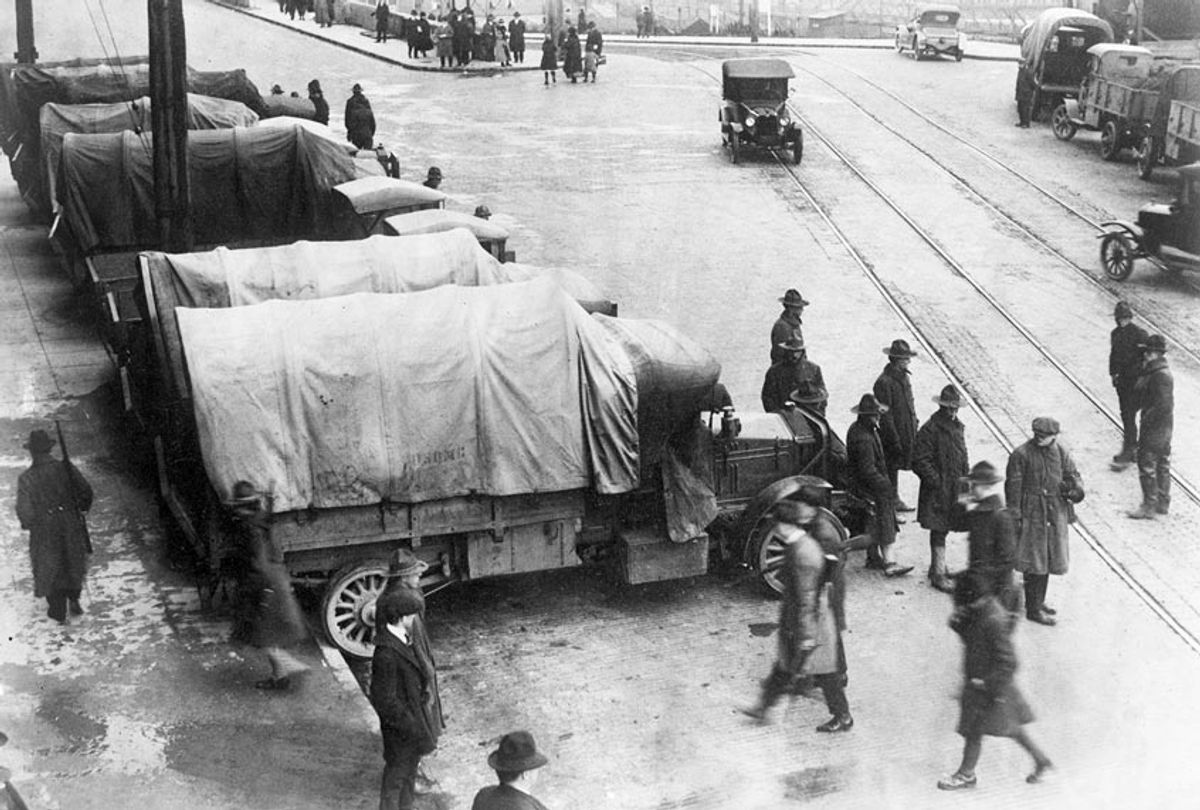 The idea that pandemic-related economic insecurity might spur a general strike has been trending among pundits and the public in the past week. Such a labor action, which would imply a complete shutdown of all industries as all workers cease showing up to work, would be historically unprecedented, a prominent historian told Salon.

"The last [general strike] I can think of was called in Seattle in 1919 by workers who felt entitled to higher wages after World War I," Mark Lytle, a professor emeritus of historical studies at Bard College, told Salon over email. "The AFL and IWW participated. Since the [general strike] was an instrument of radical European labor, conservatives labeled it 'un-American' and eventually the mayor used force to crush it."

The Seattle General Strike lasted for five days as workers in a multitude of industries protested the lack of wage increases after wage controls had kept workers' income down throughout World War I. Though the strike did not end in violence, the shipyard workers (whose cause had prompted the strike) were not able to convince federal officials to acquiesce to their demands. Police officers and vigilantes rounded up leaders of groups that had coordinated the strike, including the Socialist Party and the Industrial Workers of the World, and the press denounced the strike as a radical attempt to subvert American institutions.

Now there are calls for a national general strike in light of the coronavirus pandemic. Nearly 10 million Americans applied for unemployment benefits within the last two weeks, the largest number ever to do so within such a short period. Yet many Americans are publicly furious over the political priorities of the $2 trillion coronavirus stimulus package, which includes $500 billion exclusively to bail out large corporations. With inadequate relief coming even as millions of additional Americans face job insecurity, pay cuts and threats to their health as a result of the novel coronavirus, a number of Americans have called for a general strike as outrage piles upon outrage: President Donald Trump trying to rush through reviving the economy even though that puts workers at risk, corporations refusing to expand hazard pay and paid sick leave, workers from essential fields being forced to perform their duties without necessary safety precautions and a general sense that the powers that be are indifferent to those whose financial security has been upended by the pandemic.

A number of workers have already gone on strike. Sanitation workers in Pittsburgh are protesting the lack of safety protections as they go about their jobs, as did poultry workers at Perdue Farms in Georgia, Amazon workers in New York City, Chrysler automotive workers in Michigan and bus drivers in Birmingham. One video of a worker walkout from an Amazon warehouse in Staten Island went viral. And rent strikes are becoming more common as job losses mount.

There have even been echoes of support for a general strike among the celebrity circuit. Actress Fran Drescher, best known for starring in the sitcoms "The Nanny" and "Indebted," tweeted last week that "capitalism has become another word for Ruling Class Elite! When profit is at the expense of all things of true value, we gotta problem." Pop star Britney Spears expressed a similar sentiment on Instagram last week, posting that "we will learn to kiss and hold each other through the waves of the web. We will feed each other, redistribute wealth, strike. We will understand our own importance from the places we must stay."

Labor activist Steve Early, who pointed to the citywide work stoppages of San Francisco and Minneapolis in 1934 and Oakland in 1946 as other examples of early general strikes akin to the 1919 Seattle movement, said that the closest contemporary example of a modern American equivalent was the "day without immigrants" protests in 2005. On that occasion, Early told Salon by email, "talented organizers, with deep roots in immigrant communities managed to mobilize up to five million people in 160 cities across the country in an escalating series of one-day-a month work stairways over a three month period."

He added that those protests offer a good case in point of the pros and cons of general strikes overall.

"All kinds of foreign born workers — feeling threatened 15 years ago by the same proposed draconian GOP-backed anti-immigrant legislation — participated in the one-day strike activity, probably most of them not showing up for work in non-union workplaces… and responding to appeals from non-labor, community based groups," Early explained. "Today a similar mix of workers with formal union representation and 'unorganized' groups without it are already engaging in an impressive amount of single workplace 'quickie strike' activity over demands related to better workplace protections, hazard pay, paid time off, if sick or quarantined, etc."

He added, "There are no cons—just a lot of formidable obstacles to making this happen, such as too many unions telling their members they can't participate because they are covered by binding contractual no-strike clauses and general strike participation would expose their unions to damage suits by employers (see costly legal retaliation against ILWU for past west coast port protest strike activity, in alleged violation of agreements with management)."

"There never has been anything like a nationwide general strike," Roger Simon, a professor of social and labor history and professor emeritus at Lehigh University, told Salon by email. "There was a general strike in Seattle in 1919 and very short term general strikes in other cities at other times. Most strikes ended in violence, usually precipitated by the police."

"Workers who are showing up now are entitled to safety gear, as well as sick leave and health insurance," the historian explained. "If they strike for that they may have public support."

After listing examples of local strikes that have occurred, he speculated that "if workers strike now for safety they'd have public support. If they strike for higher wages, not at this time. Amazon warehouse workers have a lot of potential leverage, but because Amazon — and Walmarts etc — have been so aggressively anti-union it is hard for those workers to speak with a united voice.