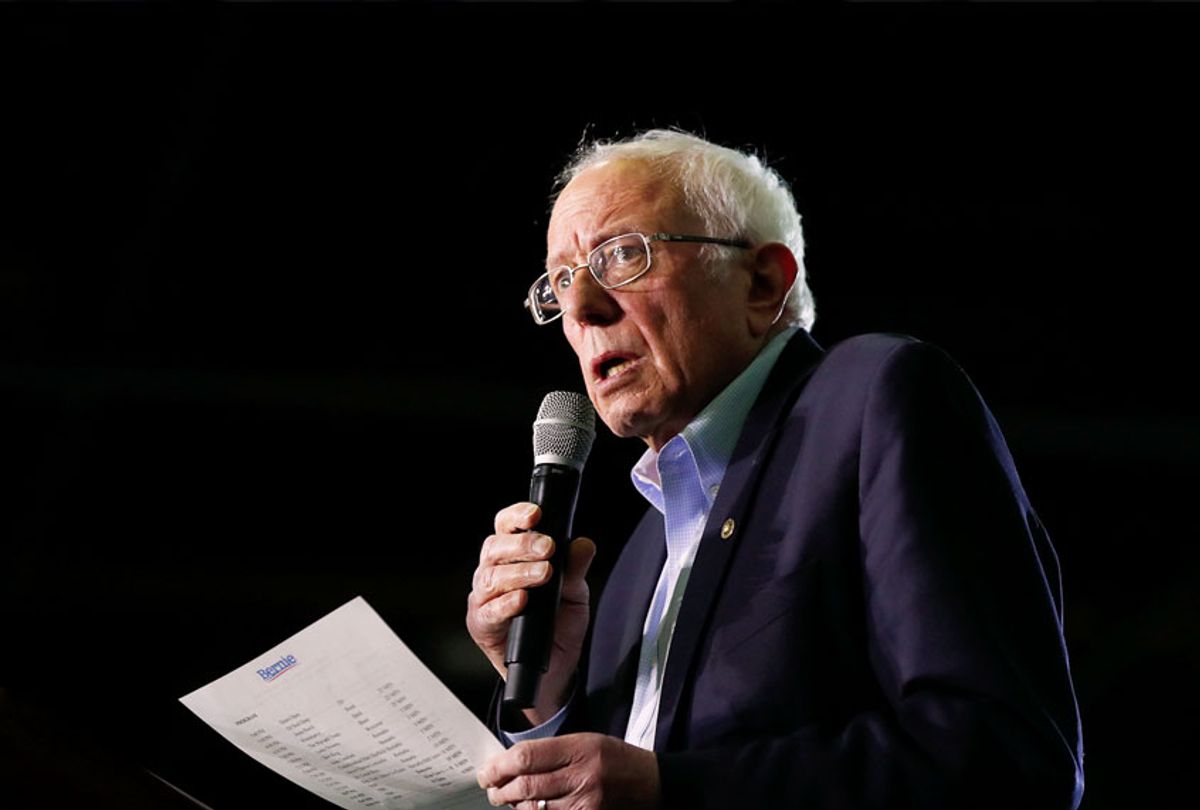 Sen. Bernie Sanders, I-Vt., suspended his presidential campaign as the coronavirus pandemic continued to upend the Democratic primary following a string of losses by the former frontrunner.

Sanders told his staff Wednesday morning that he would drop out of the race before addressing his supporters via livestream.

"Few will deny that over the course of the past five years, our movement has won the ideological struggle. A majority of the American people now understand that we must raise the minimum wage . . . and guarantee health care," Sanders said. "It was not long ago that people considered these ideas radical and fringe. Today, these are mainstream ideas already being implemented around the country. That is what we have accomplished together."

Sanders said he was dropping out because "we now face an unprecedented crisis" that will require Congress to respond in "an unprecedented way" that protects working families — "not just powerful special interests."

"This current horrific crisis has exposed for all to see how absurd our current employer-based insurance system is," he said, adding that claims by opponents who argued that people like their employer-based plans "ring hollow" today.

"If I believed we had a feasible path to the nomination, I would certainly continue the campaign," he said. But "as I see the crisis gripping the nation . . . I cannot in good conscience continue to mount a campaign that cannot win."

Sanders, citing leaders like Nelson Mandela and Dr. Martin Luther King Jr., said he would remain on the ballot to accrue delegates in an effort to gain more influence over the party platform.

"I congratulate Joe Biden, a very decent man, who I will work with to move our progressive ideas forward," he said, vowing to work with Biden after the Democratic National Convention to defeat Trump.

"Not only are we winning the struggle ideologically, we are also winning it generationally. Whether we won or lost, we received a significant majority of the votes from . . . people 50 years of age or younger. In other words, the future of this country is with our ideas," he said. "We will change this nation, and with like-minded friends around the globe, change the world."

Former Vice President Joe Biden, now the presumptive nominee, issued a statement on Medium praising Sanders' fight for "causes and issues he has been dedicated to his whole life."

"Bernie has done something rare in politics. He hasn't just run a political campaign; he's created a movement. And make no mistake about it, I believe it's a movement that is as powerful today as it was yesterday. That's a good thing for our nation and our future," the statement said. "Senator Sanders and his supporters have changed the dialogue in America. Issues which had been given little attention — or little hope of ever passing — are now at the center of the political debate . . . And while Bernie and I may not agree on how we might get there, we agree on the ultimate goal for these issues and many more."

"It's voices like Bernie's that refuse to allow us to just accept what is — that refuse to accept we can't change what's wrong in our nation — that refuse to accept the health and well-being of our fellow citizens and our planet isn't our responsibility too," Biden added. "As friends, Jill and I want to say to Bernie and Jane, we know how hard this is. You have put the interest of the nation — and the need to defeat Donald Trump — above all else. And, for that, Jill and I are grateful. But we also want you to know: I'll be reaching out to you. You will be heard by me. As you say: Not me, us."

Biden concluded with an olive branch to Sanders' young supporters.

"To your supporters, I make the same commitment: I see you, I hear you and I understand the urgency of what it is we have to get done in this country. I hope you will join us. You are more than welcome. You're needed," he said. "Together, we will defeat Donald Trump. And when we do that, we'll not only do the hard work of rebuilding this nation — we'll transform it."

President Donald Trump used the move to try to sow discord among Democrats.

"Thank you to Elizabeth Warren. If not for her, Bernie would have won almost every state on Super Tuesday! This ended just like the Democrats & the DNC wanted, same as the Crooked Hillary fiasco. The Bernie people should come to the Republican Party, TRADE!" Trump tweeted, ignoring the fact that Sanders' platform is the polar opposite of the corporate-friendly policies Trump has implemented.

Sanders dropped out after condemning the Wisconsin Republican Party for forcing an in-person primary Tuesday in spite of the ongoing pandemic.

The move comes after former Vice President Joe Biden Biden won 19 out of the last 24 contests. Biden holds a nearly insurmountable lead of more than 300 delegates. Biden is now the presumptive Democratic nominee for the presidency.

Sanders struggled to gain traction early in the primary campaign and underwent surgery following a heart attack in October. But he surged late in the year as Sen. Elizabeth Warren, D-Mass., the fellow progressive in the race, began to fade in polls. Sanders kicked off the primary season with popular vote wins in the key early states of Iowa, New Hampshire and Nevada.

The senator appeared to be moving toward an "insurmountable lead," other campaigns worried, and some superdelegates began discussing ways to stop Sanders from becoming the nominee at the Democratic National Convention.

But Biden's long-expected landslide win in South Carolina, buoyed by the endorsement of Rep. Jim Clyburn, changed the course of the race. The win forced Sen. Amy Klobuchar, D-Minn., and former South Bend Mayor Pete Buttigieg out of the contest, opening up what many labeled the "moderate lane" for Biden. Both Klobuchar and Buttigieg immediately endorsed Biden, helping to propel him to wins in 10 of the 14 states that voted on Super Tuesday, including Texas, Virginia and North Carolina. Biden also won in Klobuchar's home state of Minnesota and in Sen. Warren's home state of Massachusetts.

Biden followed up his dominant performance with wins in Michigan, Missouri, Mississippi and Idaho on mini-Super Tuesday the following week. It marked a major turning point since Sanders won Michigan against Hillary Clinton in 2016 despite trailing by more than 20 points in the polls. Sanders also came within 0.2% of winning Missouri in 2016 but lost to Biden by about 25 points.

Exit polls showed that Sanders overwhelmingly won among young voters, but those under 35 made up a small percentage of the overall electorate. Biden, on the other hand, handily won among black voters and older voters, who turned out in much larger numbers.

The race was further upended by the spread of the new coronavirus, which forced both candidates to cancel rallies in key upcoming states. Precautions also led CNN to scrap the live audience planned for Biden and Sanders' first one-on-one debate in Phoenix.

Sanders faced calls to drop out immediately after mini-Super Tuesday.

"The math says Joe is our prohibitive nominee," former candidate Andrew Yang, who endorsed Biden after backing Sanders in 2016, said. "We need to bring the party together. We need to start working on defeating Donald Trump."

Clyburn went as far as urging the Democratic National Committee to "step in" to "shut this primary down."

Sanders' campaign pushed back on those calls, but campaign surrogates like Rep. Alexandria Ocasio-Cortez, D-N.Y., acknowledged that there was a "stark" generational divide in the party that made Sanders' path difficult.

Sanders vowed to fight on after the tough losses and challenged Biden repeatedly at their first head-to-head debate on some of his key issues: climate change, health care and Social Security. But the candidates were forced off the campaign trail by the pandemic. Ohio and several other states postponed their primaries as a precaution related to the pandemic. Unable to hold any rallies, Sanders lost by double-digits in Florida, Illinois and Arizona, with few primaries to bounce back before the end of April due to states moving their primary dates later into the year.

Biden sought to reach out to Sanders' supporters after his string of wins.

"Let me say, especially to the young voters who have been inspired by Senator Sanders: I hear you. I know what's at stake. I know what we have to do," Biden said after winning the March 17 primaries. "Our goal as a campaign and my goal as a candidate for president is to unify this party and then to unify the nation."

Sanders ran an unapologetically progressive campaign, arguing that health care should be a human right and advocating for the Green New Deal. Sanders also called to cancel college debt, institute free public college, create a universal child care program and make housing a basic right. Sanders vowed to increase the top marginal tax rate and hike corporate and capital gains taxes to pay for many of his proposals.

But while many of his proposals received strong backing in the polls, Sanders was dogged by questions of "electability" against President Donald Trump. Exit polls showed that Sanders won among voters who said they preferred a candidate who agreed with them on the issues, while Biden handily won voters who preferred a candidate with the best chance of beating Trump. But polls actually suggested that Sanders was just as strong as Biden against Trump.

Despite his losses, Democratic voters in 23 consecutive states said they preferred his plan to replace private health insurance with a government-run system to Biden's public option proposal in exit polls.

"While our campaign has won the ideological debate," Sanders said after a tough primary night, "we are losing the debate over electability."