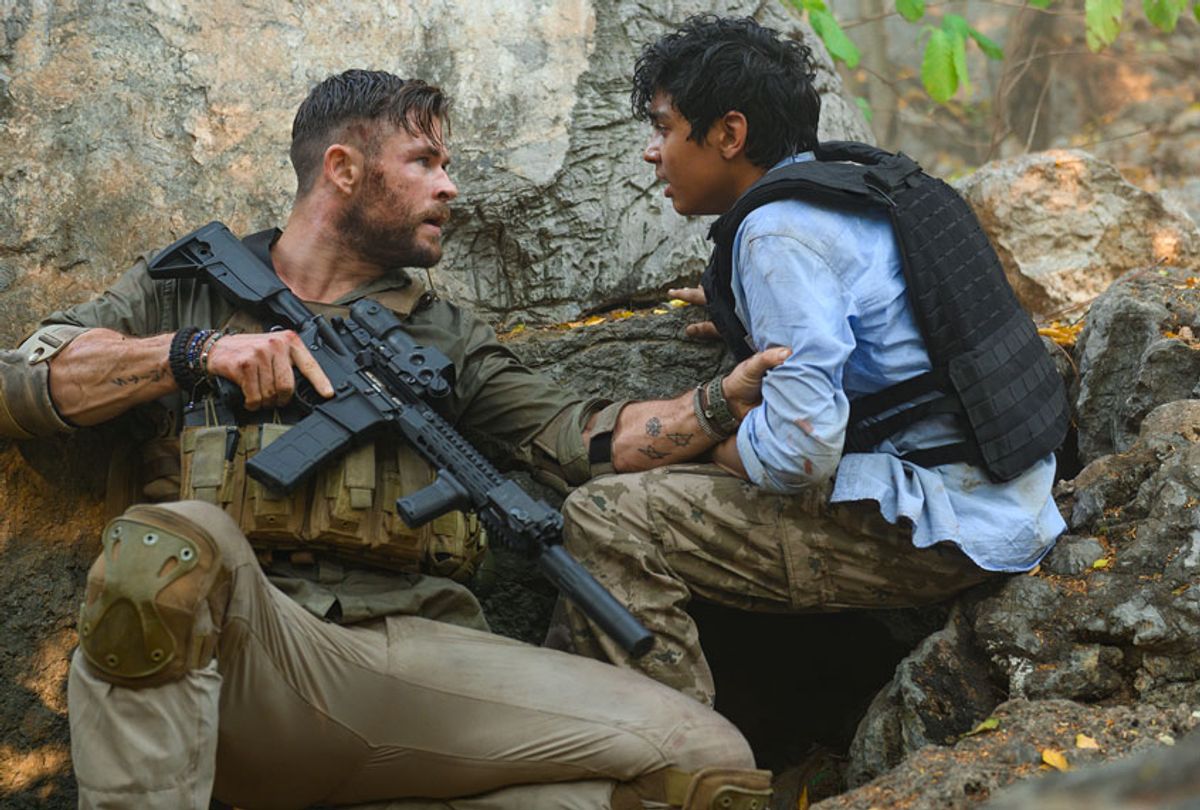 MCU stuntman-turned-filmmaker Sam Hargrave makes an auspicious directorial debut with Netflix's "Extraction," which joins a wide selection of other movies streaming in April. This visceral film, written by Joe Russo ("Avengers: Endgame") — based on the graphic novel "Ciudad" — has Tyler Rake (Chris Hemsworth, of "Thor" fame, who also produced) hired to return Ovi Mahajan (Rudhraksh Jaiswal) to safety after being kidnapped by a gangster (Priyanshu Painyuli). Tyler has only mild difficulty getting Ovi, but it's keeping them both alive afterward that causes him trouble.

The filmmaker talked with Salon about his atmospheric action film, directing and coordinating stunts, working with Hemsworth, and how he once badly hurt himself.

This is an ambitious first feature film as a director. There are globe-hopping locations, extended action sequences, and so many logistics. Why did you decide to do this and how the hell did you pull it off?

I'm crazy! I read the script when Joe Russo approached me on "Infinity War." I'd been looking for a film to direct for some time. I wanted action, but also emotion, because you have to care about the character going through the action. The script ticked all the boxes. On the creative side, working with the Russo Brothers and Chris Hemsworth, who I had a great relationship with, it was a win-win situation.

Given your stuntman background, I'm curious how much choreographing you did for the stunts and action scenes? That 12-minute long sequence was breathtaking. I watched it twice!

I like that you watched it again and wondered how it happened. The beauty of making a film is that you're not working alone. As a director, there are so many other aspects. I turned over the designing of the moves to my stuntman Dan Stevens. On the page, it was not one-take, it was more a Bourne or Bond action sequence. But given the time and schedule and resources I had, I wanted to do something unique to our story and my style of filmmaking. So, I landed on the idea of doing it sequentially and have the viewer go on the extraction in real time with the characters.

I operated the camera as if I was there, and part of the chase. I kept it handheld and alive and visceral and exciting. For the physical choreography, the stunt team worked in tandem with the tech team, and once we landed on location, I would take the stunt team to the locations and go through the moves and adapt and mold them to the environment, so it felt smooth and it worked. It was a collaborative process. We had seven to eight full-on tech crews, so everything was lined up because we had limited time and a lot of action to jam into 10 days.

The film never felt like a video game, which is what I hated about "1917," but I did feel the car chase has a very much you-are-there approach. How did you lean into the action genre, and how did you put your own stamp on the genre?

Truthfully, that's one of the hardest parts. You don't want to be too derivative, but everyone comes with influences. I was influenced by Jackie Chan and Jet Li and the way they shoot and move and their editing. But also Western cinema. You're a product of your past, and what you idolized watching growing up. But 10 directors will shoot the same scene 10 different ways. I tried to lean into it, and it can be scary because of who came before. Will people like the way I see action? You let go. While I'm telling folks where to put the camera, and what the actors should do, because I am a fan of action movies, I wanted it to be something I'd be entertained watching. I tried to push the limits for myself.

Chris Hemsworth is pretty much a non-stop killing machine here. How did you work with him on the role, and play to his strengths and abilities as an action hero? You even made him get emotional with a crying scene. What did you tap into here?

Those were real tears. That was not CG. I was crying along with him because he's so emotional, but I was cheering because he dove into this character head-first, the physical and emotional. His energy and positivity is infectious. He's a producer and the lead and a family man, but he would still do two more hours of stunt rehearsals.

A lot of the emotion was in the script and developing a character with depth and vulnerability. We latched on to that — making an arthouse action movie, so that the action was the bonus, and our main focus was the emotional scenes. That makes you care about the action sequences. One of the reasons the character resonates with Chris is that he has a family and kids. We had deep discussions about that, and family and loss. That made it accessible to him. We would get heavy and go throw punches. He has done Muay Thai for many years, and we just scratched his potential on this film. He hit hard, and we made sure he was not a two-dimensional, cookie-cutter action hero.

The film features dirt and jungles and sewers. Can you talk about creating that atmosphere and why you transplanted the action from Paraguay, where the graphic novel is set, to Dhaka, Bangladesh?

The original script and graphic novel were set in South America, but Joe Russo said that that part of the world was saturated with drug lord stories, and Western cinema hasn't seen stories set in Bangladesh. So, we tried to keep the energy of that intent and transport it to another part of the world where these things happen. It's not just in Latin America. When we scouted Dhaka, all of our senses were being activated continuously. How do we capture that and grab you by the neck? We had a look and production designer get into the nitty gritty and dirt so you could smell the environment and feel the heat. It's a part of the world that a lot of Western audiences don't see so we wanted them to really experience it.

Can you describe an intense mission you've had to accomplish, good or bad, and how you handled it?

[Laughs.] Here's a random anecdote. I had a pipe, a water main, burst during the California drought of 2013-14, and I heard this geyser of water spraying into the air. I called the fire separtment, but they couldn't find the shutoff. The water would have been spraying for eight hours during a drought! So I set upon myself, in the middle of the night, to find the water main. I was using hacksaws and duct tape, like MacGyver, to find the main and stop the flow of water and reduce it to a slow drip. And I did it, but I cut my hand badly and still don't have feeling in it to this day. But I persevered and saved the day.

That's amazing that you're a stuntman, but you damaged your hand permanently doing a job around the house.

On a movie set, we take calculated risks, and we try to eliminate injury. In real life you make spur of the moment decisions, and they may not be the best.

"Extraction" is available to stream on Netflix on Friday, April 24.