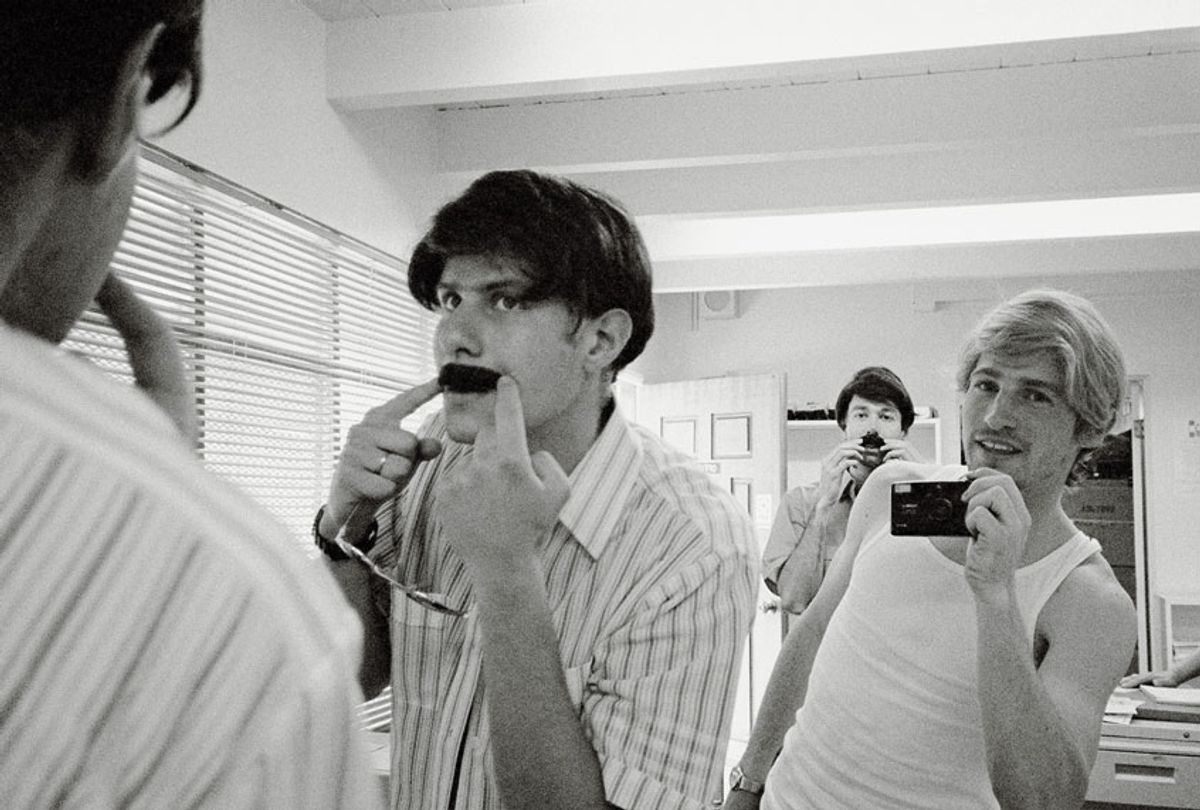 During their decades-long career, The Beastie Boys never stayed in one musical lane for long. Although the trio became multiplatinum superstars thanks to hip-hop that drew on rock 'n' roll as much as Run-DMC, they very quickly moved on and embraced other things: sampling, live-band funk, and eclectic electro.

But no matter what style the Beastie Boys were embracing in a given year, few groups had more fun. Accordingly, there's a moment in the new documentary "Beastie Boys Story" when band members Adam "Ad-Rock" Horovitz and Mike "Mike D" Diamond start reminiscing about the time the group was opening up a Run-DMC tour in the 1980s, and their late bandmate Adam "MCA" Yauch decided to have a little fun with a tour special guest, Aerosmith guitarist Joe Perry.

More specifically, at the behest of Run-DMC's Jam Master Jay, Yauch was part of the onstage crew performing "Walk This Way" — then a major hit for Run-DMC and Aerosmith's Perry and Steven Tyler — at a baseball stadium.

"The look on the Aerosmith guys' faces was fantastic bemusement," Horovitz recalled. "'Who's this dirty drunk guy onstage? And why is he playing bass? With us?' Throughout the whole song, Yauch kept trying to go back-to-back, guitar-player style, with fucking Joe Perry, who was having none of it."

As Horovitz tells this story, he and Diamond playfully chase each other around stage acting out the scene, as the audience roars in appreciation. "It ended up with Yauch chasing him around the stage running backwards," Horovitz added. "And all of us were on the side of the stage — watching, screaming, laughing, and loving it."

This anecdote not only sums up the Beastie Boys' spirit of rebellion and fearless nature — it also encapsulates the familial camaraderie within the group, something that comes through in spades throughout "Beastie Boys Story" (April 24; Apple TV+).

"Yauch was the master of never doing anything too straight ahead," Diamond notes in the press notes along with the movie. "There was always some unthought-of left turn. That remains a nice guiding light hanging over all of us. That's why we would think, 'What would Yauch do at this juncture?' Because Yauch made everything more interesting."

The 119-minute film is being called a "live documentary experience," in no small part because it chronicles (much of) one of the marathon book release shows the duo did to support their 2018 autobiography, "Beastie Boys Book." These gigs were storytelling-heavy, and featured Diamond and Horovitz translating their lengthy, unorthodox memoir into a show that was somewhere between a standup special and a spin through a pop culture history class.

Directed and co-produced by Spike Jonze, "Beastie Boys Story" is a welcome (and well-edited) glimpse into these live shows. Focused heavily on the group's formation, rise and fall in popularity, and late-career groove, the documentary continues to let Diamond and Horovitz tell their own story, in their own words, without distractions such as talking heads. (In fact, the supporting gushing is kept to a minimum: at the beginning, when fans are interviewed.)

This ensures the duo shares unique insights into their artistic motivations, interspersed between plenty of excellent vintage footage, including the band's legendary early appearance on Joan Rivers' late-night talk show. Diamond and Horovitz delight in retelling the time the entire band took to wearing flamboyant '70s clothes they found in the closet of a house they rented together in Los Angeles, and mock themselves for their juvenile behavior, such as trying to act like tough-guy punks while opening for Madonna or dubious business moves.

"Sometimes dumb jokes aren't always the best things to guide your financial future," Diamond quips, after noting the group once hired a manager specifically because they also oversaw the careers of Kenny Rogers and Lionel Richie.

"Beastie Boys Story" is more poignant than most documentaries mainly because of this humility. Elsewhere in the film, the pair express regret for the way original Beastie Boys drummer Kate Schellenbach was pushed out of the group (and, in general how the Beastie Boys started to exclude women when their career initially took off) and noted how Yauch's lyrics in "Sure Shot" ("To all the mothers and sisters and the wives and friends /I want to offer my love and respect to the end") resonated deeply.

"Not only did he speak to a lot of people, he spoke to the two of us," Diamond said of Yauch, while Horovitz added that the era featuring 1992's "Check Your Head" and 1994's "Ill Communication" was formative. "Those years recording and touring on those two records were so important to us. We changed directions of our band; we changed how we wanted to be as people and friends. We thought about the world—instead of just our world."

Both Diamond and Horovitz have made it very clear since Yauch's 2012 death from cancer that the group is done making music, and they've stuck to that vow. This commitment to keeping the Beastie Boys tucked away in the past is, paradoxically, perhaps one reason why "Beastie Boys Story" is such a success: The documentary's release isn't tied to any posthumous music or legacy-building compilation, but simply feels more like a touching, funny, public memorial service for their friend.

At one point, Horovitz sits on the lip of the stage and reminisces about the last show the Beastie Boys ever played: a 2009 headline gig at Bonnaroo. He noted they didn't know at the time it was their last show, and described the experience of traveling to Tennessee and doing the usual new-album prep while they were there, including shooting a music video in a grocery store.

"The weirder, the more normal for us by then," he quipped.

Unexpectedly, however, Horovitz then gets choked up as he contrasts this career normalcy with Yauch and Diamond with hearing Al Green finishing his Bonnaroo set on the venue grounds.

"Hearing his voice in the distance was comforting, just like how it was when I was in high school, in my bedroom, waiting for them to come over. But now was such a great distance from then. The rearview was nearly impossible to reposition." Still fighting back tears, he went on to reminisce about the friends and relatives who weren't there with them, and talked about how momentous it is to headline a festival set instead of playing a well-attended gig at CBGB.

The absences he's feeling at that moment — of loved ones, of friends, of a bandmate, and even the career as he knew it — are achingly obvious, and linger in the air even after he's done speaking.

And "Beastie Boys Story" feels like it could have only been made now, when Diamond and Horovitz had distance to process not just the arc of the Beastie Boys' career, but also the impact of Yauch's death. While watching the documentary, and seeing all the hilarious and touching footage of them together — and how this stands in contrast with the fact that just Horovitz and Diamond are kidding around with each other on such a large stage — the enormity of this loss is palpable.

It's impossible not to wonder what Yauch might say in response to his friends' memories — or, all these years later, how he might interpret the Beastie Boys' career and music. However, "Beastie Boys Story" is bittersweet more than sad, and doesn't dwell on what-ifs. Instead, the documentary celebrates a singular group that never lost their desire to innovate, create and become better people.