The latest Apple TV+ family drama is a crisply tailored crime and courtroom mystery. It's also an Evans showcase 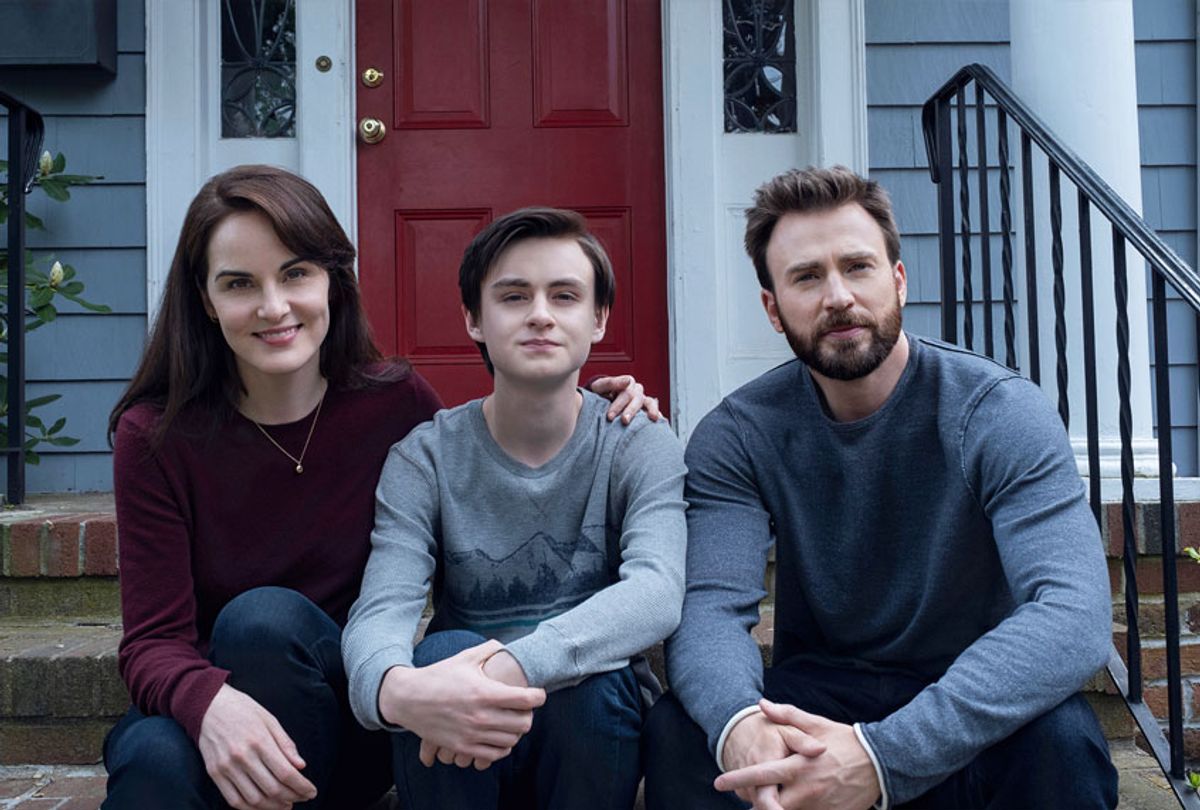 "Any man can be a father, but it takes a hot, middle-aged guy with a big job to be a daddy." A wise man once said that. Wait — no, my bad, it was Matt Damon. That doesn't make it any less true. The difference between a father and a daddy is significant and miraculous, making it even more incredible to see Chris Evans managing to be both at the same time in the new Apple TV+ drama "Defending Jacob."

Going by the numbers, Evans is a couple of years shy of actual daddy territory, if you hold to the definition of middle age as starting at 40. (Does that make him more of a zaddy? Discuss.) Still, he's got that vibe on lock as Newton, Massachusetts assistant district attorney Andy Barber, a hotshot prosecutor and a respected member of the community alongside his wife Laurie (Michelle Dockery).

Andy is considered to be one of the best in his game until his son Jacob (Jaeden Martell) is accused murdering his 14-year-old classmate. By necessity, his office puts him on leave. Because he's one of the best, Andy does one questionable act to protect his son that may or may not have unfortunate consequences both immediately and down the line.

This is an entirely different look for Evans — neither the bright-faced do-gooder Captain America nor the conniving "Knives Out" character Hugh Ransom Drysdale. The version of Evans experienced in "Defending Jacob" sports facial hair trimmed with a laser's accuracy, which director Morten Tyldum highlights by way of tight close-ups on the manscaped mug.

Not even the gray camera filter layering a frostbitten cast over the town and its interior spaces can chill out this newly-tapped power source. Seen in better times, Andy dangles offers of spoiling his family with a trip to Mexico; viewed in times of tribulation, he holds Laurie in a way designed to make scores of ladies and gentlemen fan themselves. He wears a concerned wrinkle in his brow, driving with one hand firmly at 11 o'clock to show off his wedding band.

Within the first two episodes Andy blasts through red lights and leaves spun-out near crashes in his wake, spurred on by the drive to protect his family. That's what a father is supposed to do, only Evans handles the family car less like a dad than a daddy. (Keeping the family's car insurance rates low never seems to enter the picture in "Defending Jacob.")

It's doubtful that William Landay carefully considered Andy's daddy potential when he first fleshed out the character's profile for his 2012 book that inspires the series. By casting Evans in the role, Apple TV+ is slapping us across the face with pure uncut daddy mien. Striking first is Evans brooding darkly and fetchingly from the very start, slumping over a microphone in anguish — sexy, sexy anguish — during a grand jury preliminary hearing that serves as the story's framing device.

Even as life around Andy and his family is falling apart, Evans generally radiates the energy of a man handling his business with smooth appeal.

Now, it may seem strange for Evans' newfound daddy-appeal to lead of a review of a serious family drama designed to fit all the descriptors studios like to feature in ads: enthralling and unpredictable, but in a way that one sort of expects.Evans himself might also take issue with being objectified thusly if he were to read this, which he won't, and that's understandable considering that he really put his back into this performance.

What do you expect? "Defending Jacob" happens to have a blinding Dog Star as its lead, but even if it didn't, it would stand on its own merits -- which is to say, as a standard family drama-slash-thriller, it does what it's supposed to do. Mark Bomback's adaptation makes the most of tense silences and dialogue exchanges presented with little embellishment. It's a crisply tailored crime and courtroom mystery designed to keep its audience guessing while also highlighting the cast's performances.

It also hurtles through its eight episodes on the rails of a theme stated by a major character near the end of it: You can be a good man, the guy says, or you can be a good father. That this comes out of the mouth of a figure not worth emulating in any way is circumstantial; what matters is that it spells out Andy's entire plight.

Andy has spent his entire life hiding the existence of a father (J.K. Simmons) he wishes he could forget. His paternal history becomes the standard to work against as a father figure, urging him at all times to be better. The accusations against his son test his ability to do this, raising questions of how much biological destiny plays a role in the people that we or our children turn out to be.

And the story gives the cast fertile possibilities to play with, particularly Dockery and Martell whose interplay as mother and son grows increasingly fractious and strained as the series wears on. Dockery does an admirable job of wrapping Laurie in an electrical net of nerves and paranoia, making her performance more expansive and affecting at times than her co-star.

Martell simultaneously keeps the audience off balance with his closed-down expressiveness and low-heat emotional affect, making Jacob curiously unreadable.  Whether Jacob's blankness comes from disconnecting from the world through video games, from being awkward, misunderstood and bullied, or whether it is proof of a sociopathy that his parents choose to ignore remains a constant concern to the very end.

Cherry Jones and Pablo Schreiber also are potent presences, with Jones superbly balancing warmth and surety in the role of the Barbers' defense attorney Joanna Klein, and Schreiber turning in a brutal, targeted performance as Neal Logiudice, Andy's former co-worker turned bane of his existence by prosecuting the case.

Sakina Jaffrey also co-stars as Lynn Canavan, Andy's ally on the police force, and she and the black judges, along with a couple of Laurie's co-workers and a school friend of Jacob's, pretty much represent the extent of cast's diversity. That may be reflective of the real Newton's population, but it's also a detail that draws thick lines around Andy's and Laurie's savior complexes apart from their family's legal concerns.

Nevertheless, given the heavy drape with which the production hangs off of Evans' assured yet sublimated swagger, those nitpicks are simple enough to brush aside.  Evans' BDE — his Big Daddy Energy — is that undeniable, a gift to shut-ins, murder mystery hounds and family drama addicts. His work here is proof that not all heroes carry shields or suit up in spandex. Some wear the hell out of wool and a good quality cotton tee. Evans is the TV daddy we need right now. "Defending Jacob" just happens to be the easy driving prestige luxury vehicle touchlessly delivering him to our homes. We'll allow it.