Trump and the coronavirus have exposed America as a declining empire: Time to face the facts 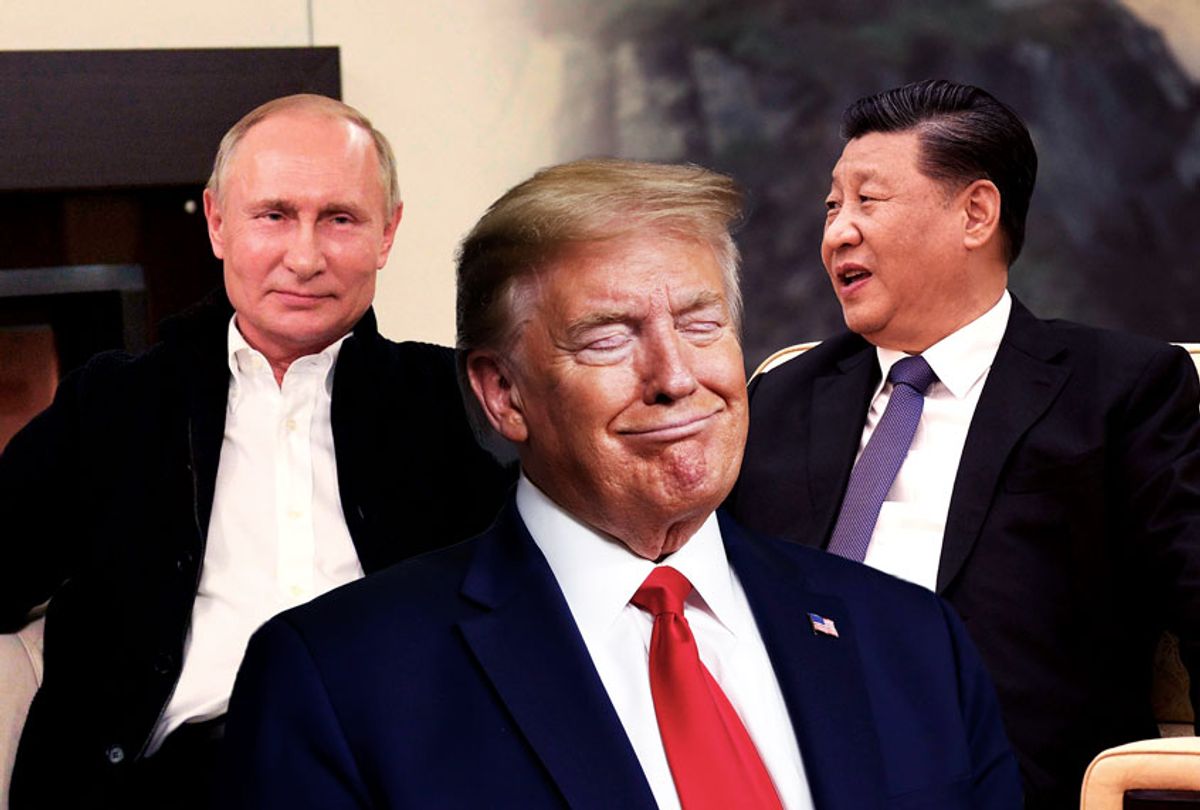 Many Americans who were children sometime between the 1950s and the 1980s no doubt remember Game of the States. It was (and evidently still is) a simpleminded catch-and-carry board game through which multiple generations learned vague, generic facts about the 50 states. That game is probably the reason I know all 50 state capitals to this day. Massachusetts and Georgia are tough because the answers are too obvious; South Carolina and West Virginia are tough because the answers seem almost intentionally confusing.

But the most important teaching tool in Game of the States was its playing surface, which depicted the United States floating in a sea of blue, an innocent island of Idaho potatoes, Missouri hams and Pennsylvania steel. If as economic history the game was completely devoid of context or dynamics, as geography it was even worse. Canada? Mexico? What and where are they, exactly? Both our neighboring nations appear to have vaporized. If any trade exists with them or anyplace else in the outside world, it's entirely invisible.

Far too much about America is explained by Game of the States. We have an ingrained national tendency to behave as if the rest of the world simply doesn't exist — or, on a slightly more sophisticated level, as if it were just a colorful backdrop for our vastly more important national dramas. The only time "foreign policy" plays a significant role in American politics — for liberals or conservatives or really anyone — is when a major overseas war becomes an unavoidable and damaging issue, as with Vietnam in 1968 and 1972, and Iraq in 2008.

But the constant level of U.S. military intervention or interference in numerous countries since then — none of it rising to the level of official, acknowledged conflict — is completely invisible to American voters, and therefore not controversial. Hardly anyone ever talks about how the United States bankrupted itself and destroyed its future by pouring trillions of taxpayer dollars into two decades of massively destructive war in the Middle East. I mean, the Roman Empire and the British Empire and the Ottoman Empire all overextended themselves and collapsed too; such is the nature of things. But I don't think any of them were guilty of a massive self-own on quite that scale, all while pretending it wasn't happening. In hindsight, Osama bin Laden's box-cutter scheme was more successful than he could ever have imagined.

This tendency toward national blindness is especially pronounced in the case of the coronavirus pandemic — as it was also with the surge of anti-democratic populism and the election of Donald Trump. Both things are unmistakably part of larger global patterns, yet many or most Americans continue to behave as if they were unique and unparalleled, and happening only to us.

What the coronavirus has shown us, if we're willing to see it, is America as an imperial power in steep decline, revealed before the world as a weak, divided and ineffectual nation — albeit one with the greatest military force in world history. To put it in the mildest possible terms, that's a dangerous combination; it might better be described as profoundly terrifying.

It isn't just that the U.S. response to the pandemic has been among the worst of any major nation — OK, let's make that clearly the worst — utterly bereft of coherent national leadership. With barely 4% of the world's population, the U.S. has by far the largest share of COVID-19 cases and deaths, and is apparently about to risk a second upward spike in both statistics.

It isn't just that our paralyzed political system has offered nothing close to a clear national emergency plan to support both businesses and ordinary citizens through this unprecedented crisis. Other national leaders in the Western economic zone, including those who seemed embroiled in permanent internal discord, such as French President Emmanuel Macron and British Prime Minister Boris Johnson, have at least done that. But our dysfunctional government has flung billions at big corporations and one monthly paycheck at regular folks, followed by the stupidest and starkest form of social-Darwinist choice: Go broke or risk your life.

It isn't just that our corrupt, conniving and alarmingly incompetent president has repeatedly made a fool of himself in public, whether through outright lies, unfounded speculation, flatulent boasting or pseudo-scientific blather. We ought to be used to that by now. But I don't think we have fully registered how it looks to the rest of the world that the self-appointed greatest nation in the world and guiding light of freedom and democracy elected this person in the first place, and that close to half our population continues to view him with reverence and adoration, as a supreme symbol of our national values and aspirations. (The very deepest level of historical irony here, of course, is that those people may be right about that. It may be the rest of us who are deluded.)

It isn't just that Donald Trump has been repeatedly played like a worn-out lake trout, now and throughout his presidency, by both Xi Jinping and Vladimir Putin, who have clearly perceived the downward trajectory of the United States and are positioning themselves for maximum influence within a reconfigured world order. I don't know whether Xi and Putin ever had a private meeting or trebly-encoded phone call where they told each other, Ha ha, this guy is like totally our word-rhyming-with-witch. Should be fun! Quite likely a backstage eye-roll or a wordless clink of vodka glasses was all it took.

Far too much virtual ink has been expended exploring Trump's mysterious relationship with Putin, and in all likelihood we will never know the whole story. I don't pretend to know whether blackmail of some kind was at work — personal or financial or both — or whether it's just that Trump, like so many moral weaklings who fancy themselves strong, was irresistibly drawn to a despotic leader who clearly has a powerful command of craft and strategy.

In the larger scheme of things, it strikes me as more important to take a few steps back and appreciate that Putin — who, despite all the mythology Americans project onto him, commands a second-rate military power with a struggling economy — has deployed a sophisticated understanding of the information age to exploit the weak spots in the U.S. and other Western democracies. Russia's president didn't create any of those weaknesses; they were already there and visibly getting worse.

It is a fatuous and narcissistic disorder of American "resistance" to claim that Putin elected Trump, or that without Russian interference we would be sailing along in the demi-paradise of Hillary Clinton's presidency. I'm not saying Clinton wouldn't be a "better" president than Trump, since she obviously would be. But that would have solved exactly none of the deeper structural, cultural, social and ideological problems that have been targeted by Russian propaganda — and made even worse, arguably, by exaggerated paranoia about Russian propaganda. Every time an American leftist on Twitter gets called a Russian troll by some purportedly sensible centrist, some guy in St. Petersburg shakes his head in wonder: We had no idea how easy this would be! We sent them half a can of gasoline and a damp book of matches, and they burned the place down themselves!

But I suspect the U.S. relationship with China is more significant, in historical terms. I claim no expertise in the internal logic or strategy of Xi and the Chinese leadership, but I don't think it's remotely controversial to say that China will be the leading economic and industrial power of this century, and that its current regime has expertly caught Trump in a Heffalump trap of his own design.

On one hand, Trump has empowered and enabled China hawks on the Republican right like the terrifying Sen. Tom Cotton of Arkansas, who is clearly preparing for a future presidential campaign based on the promise of apocalyptic imperial conflict. On the other, although Trump's trade policies have been primitive, he understands the issue slightly less poorly than he understands everything else, and knows that a trade agreement with China is crucial to his dwindling hopes of re-election. He has gone out of his way to avoid antagonizing Xi — another despot for whom he feels unearned personal affection — and has repeatedly undercut right-wing attempts to frame the 2020 election as a nationalist crusade against the "China virus."

So it isn't any of those things individually — it's that they're all happening at once. This pandemic has stripped away much of America's pompous, self-aggrandizing façade and has made many aspects of the nation's decline, and its fast-decaying claim to world leadership, even more obvious than they already were. I'm deliberately stepping around the even larger question of historical framing, and what might be called the Chomskyite argument that the United States has largely been a baleful force in human history over the last seven or eight decades, and that overall its decline is more a good thing than a bad thing.

That may be true; it's certainly a defensible claim, although it leads too many leftists toward incomprehensible excuses for the tyranny inflicted on the Chinese and Russian people. Personally, I'm inclined to believe that history rarely renders clear verdicts of that kind, and that the results of American imperial decline will be a mixed bag, full of dire peril and possibility. But one thing is for sure: We need to stop pretending that America after the coronavirus, and after the Trump presidency, will be the same kind of nation it was before, with the same role of more-or-less unquestioned global dominance. We have deluded ourselves far too long on that front already. There is no making America great again, and it's time to move past that. But there's a real chance to make a better future for this country and the world.