Our anti-science leaders are the geocentrists of today 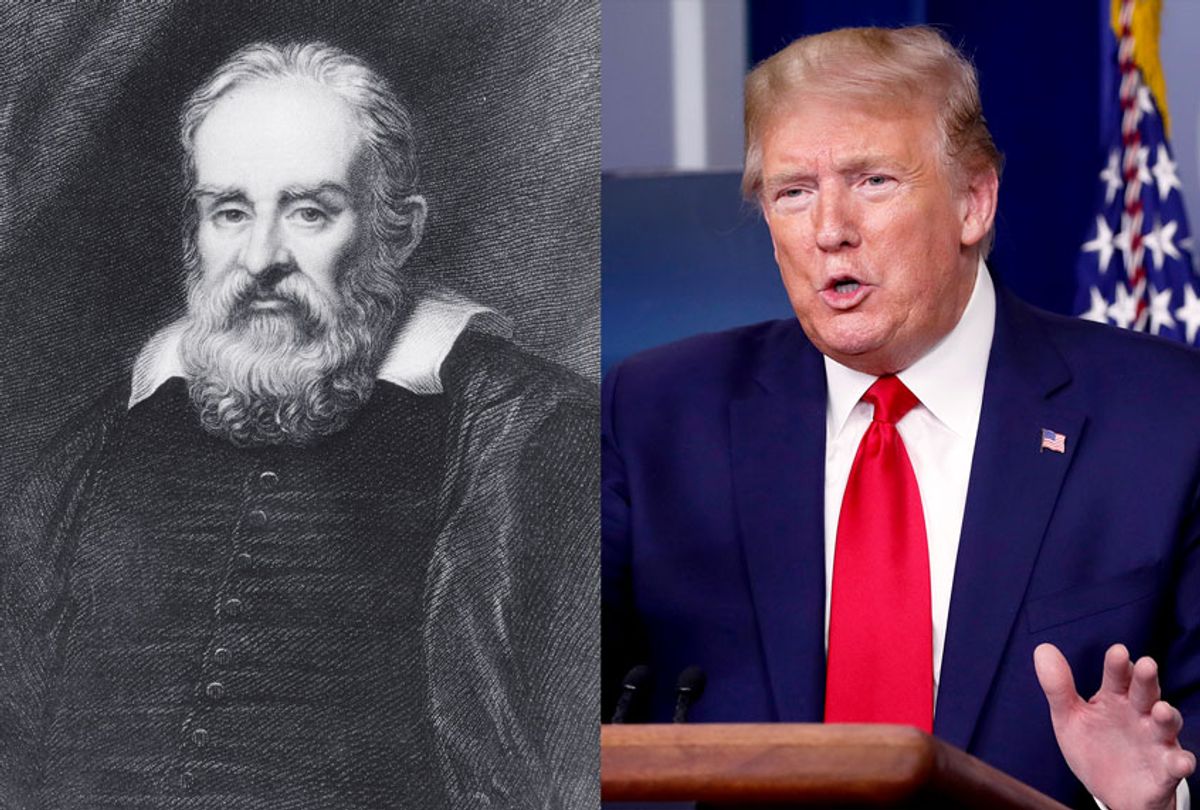 On February 26, during a Coronavirus Task Force press briefing at the White House, President Trump declared: "when you have 15 people [infected by the Coronavirus], and the 15 within a couple of days is going to be down to close to zero, that's a pretty good job we've done." The U.S. plan did not include at that stage either mass testing, or technological tracking and contact tracing of the type successfully employed in South Korea.

That was only two months ago; now, the United States has well over one million cases. Indeed, Trump's words, and his ignorance of the epidemiological evidence at hand suggesting a massive pandemic was about to break out, illustrate how little respect his administration has for science. Since the Renaissance, the fundament of Western civilization has been an embrace of rationalism, which has become foundational to governance, economics and technology. Trump and his ilk reject this. Four centuries after the scientific revolution initiated by Galileo Galilei, how is it possible that we are still be witnessing such rampant science denial?

At the heart of Galileo's scientific revolution was the crucial notion that we cannot say that we believe in anything until we can show why we believe it, and how we reached that belief. In Galileo's case, the Earth revolved around the Sun because the observational facts he uncovered with his telescope made the Copernican model of the solar system more plausible than the geocentric one . Today, sadly, we knew that we may expect many tens of thousands of deaths from COVID-19, because detailed mathematical models based on empirical data predicted that this would be the outcome unless certain extremely strict measures were to be taken immediately.

Put bluntly, what Galileo established as separating science from other types of "revealed" truths was this: facts and the ability to make testable predictions mattered. There weren't anymore your facts and my facts, neither were there facts and "alternative facts". There weren't revealed facts or aspirational facts. Facts came in only one flavor — observable. Observations, experiments, and reasoning based on reliable data became the only acceptable methods for discovering facts about the world.

In the seventeenth century, when a collision occurred between this new approach to science and literal interpretations of Scripture, Galileo tried every which way to demonstrate that the two could peacefully co-exist, pointing out that the Bible was not written as a science book. First, he noted that astronomy plays so small a part in the big Biblical story that "not even the planets are named." Then, he argued that "the mobility or stability of the Earth or Sun, is neither a matter of faith nor one contrary to ethics," so it cannot be a threat to revealed truth, for that truth served a different purpose — to teach humans the path to salvation. Finally, in an attempt to bravely stand up for science and intellectual freedom, he pronounced something that is equally relevant for today—that he did not think "that the same God who has given us our senses, reason, and intelligence wished us to abandon their use.

Galileo was severely punished for his obstinate defense of intellectual freedom. He was put on house arrest — effectively quarantined — for eight and a half years (until his death). Giordano Bruno before him had been burned at the stake. But these fights planted the seeds of the freedom of speech we enjoy today. Poet John Milton (of Paradise Lost fame), recognized this fact already in 1644, when in a passionate plea for freedom of speech he lamented that the censorship of Galileo had a chilling effect and "damped the glory of Italian wits."

President Trump's motivation in dismissing for the longest time the severity of the virus was not religiosity, it was political — wanting to be re-elected. But his denial of scientific facts was even more shocking. On March 12, in a meeting with the Irish Prime Minister, Trump bragged: "I mean, think of it: the United States, because of what I did and what the administration did with China, we have 32 deaths at this point. Other countries that are smaller countries have many, many deaths. Thirty-two is a lot. Thirty-two is too many. But when you look at the kind of numbers that you're seeing coming out of other countries, it's pretty amazing when you think of it."

Fortunately, over time, the Catholic Church has realized its mistakes in the Galileo Affair, with Pope John Paul II eventually acknowledging that "Paradoxically, Galileo, a sincere believer, proved himself more perspicacious on this issue than his theologian adversaries. The majority of theologians did not perceive the formal distinction that exists between the Holy Scripture in itself and its interpretation, and this led them unduly transferring to the field of religious doctrine an issue which actually belongs to scientific research."

Trump was also forced to change his tone, even though he still insisted on March 16: "No, I've always viewed it as very serious," continuing, "there was no difference yesterday from days before. I feel the tone is similar, but some people said it wasn't."

Given his own experience, Galileo might not be that surprised to hear that political considerations would make grim predictions about the spread of the coronavirus targets for science deniers at high places. He would be far more surprised — in fact probably perplexed — by the anti-vaccine science deniers, because those are putting their own children at risk. He would be besides himself over the science deniers of climate change.

What would no doubt terrify him the most is the reality where we find ourselves today: in a world where we are witnessing the death of facts.

We have been there before. In "The Origins of Totalitarianism," philosopher Hannah Arendt prophetically wrote, "The ideal subject of totalitarian rule is not the convinced Nazi or the convinced Communist, but [emphasis added] people for whom the distinction between fact and fiction (i.e., the reality of experience) and the distinction between true and false (i.e., the standards of thought) no longer exist." That description certainly embodies the Trump administration's initial reaction to the pandemic.

At times like the horrible one we are experiencing right now, we should take a lesson from Galileo's legendary (apocryphal or not) motto, "And Yet It Moves," which has become a symbol of intellectual defiance, conveying the crucial message that in spite of what you may believe, these are the facts.

Mario Livio is an internationally known astrophysicist and a popular speaker who has appeared on The Daily Show, 60 Minutes, and NOVA. He is the author of the bestsellers "The Golden Ratio" and "Brilliant Blunders." His latest book is "Galileo: And the Science Deniers." He lives in Baltimore, Maryland.