Is a deal brewing for the Trump family to take over OANN — perhaps as Donald Trump's post-White House TV home? 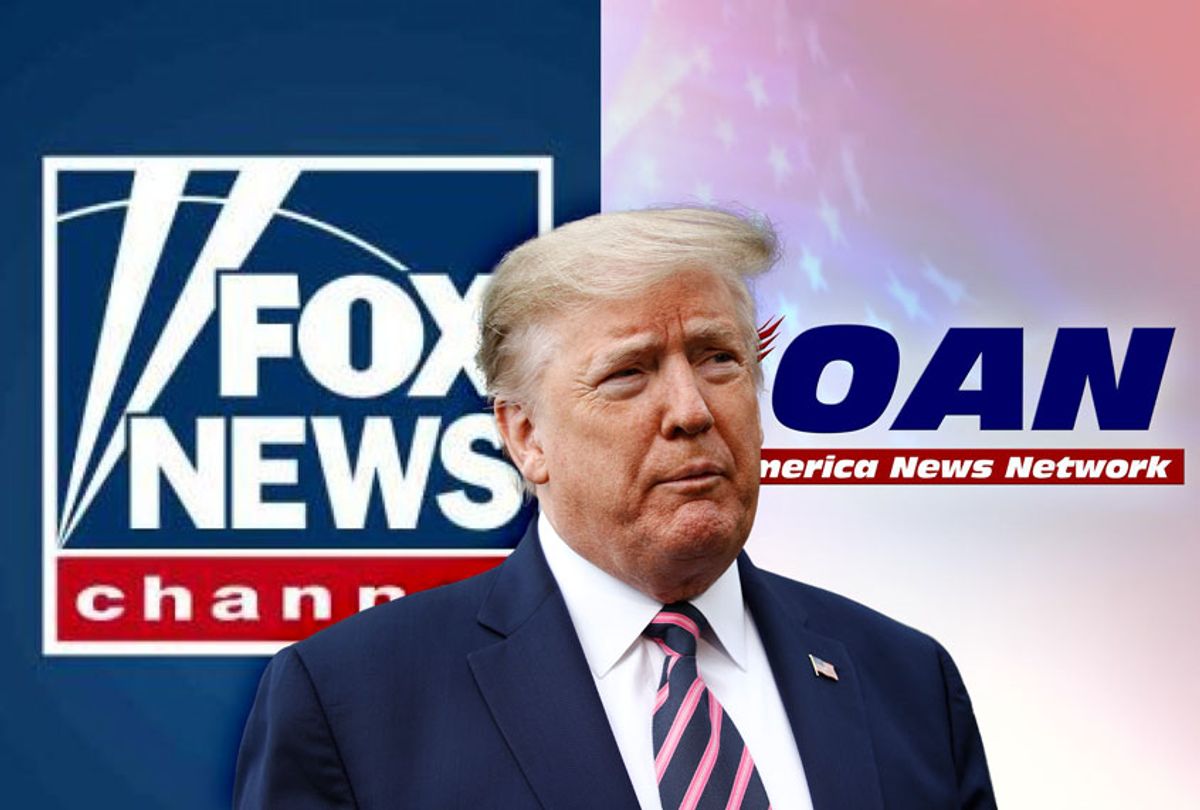 "Tommy Hicks and Don Jr. have been looking to buy a station for Trump TV," a person briefed on the negotiations told Vanity Fair.

"This is all about building a Fox competitor. Trump is really aiming to take down Fox," the person said.

The report is the first to connect the Trump family to the acquisition, discussions of which were first reported in January by the Wall Street Journal.

The Journal reported that Hicks Equity Partners, a firm belonging to the family of Tommy Hicks Jr., the RNC co-chair, was negotiating a $250 million deal with Herring Networks, the parent company of OANN, a low-impact far-right network that offers a home to the likes of Pizzagate conspiracy theorist Jack Posobiec and has defended Roy Moore and endorsed Russian propaganda.

Sources told Vanity Fair the deal has stumbled along for months and still hasn't closed, but that the Trump-affiliated group had reportedly talked Herring down to $200 million. VF said it was also unclear whether Donald Trump Jr. invested Trump money in the deal, or was given equity.

As the buyout talks progressed, President Trump has repeatedly expressed his growing distaste with Fox News — long perceived as the only network he likes, and certainly the only network that consciously slants coverage and analysis in his favor.

Last month Trump accused Fox News of "being on a bad path," and has asked twice now "what the hell is happening" at the network. He attacked Fox reporters twice last month during White House coronavirus briefings, and has taken several potshots at several of the channel's shows and personalities, tweeting in January that Fox News was "really pathetic" and "so politically correct," singling out Chris Wallace's impeachment coverage.

After it was reported that Fox had fired MAGA-world luminaries Diamond and Silk for hawking ludicrous coronavirus conspiracy theories, Trump tweeted his support for the duo: "But I love Diamond and Silk, and so do millions of people!"

In late April, Trump took to Twitter once again to call for an alt-Fox, pro-himself network:

"The people who are watching @FoxNews, in record numbers (thank you President Trump), are angry," he wrote. "They want an alternative now. So do I!"

During this same period, Trump often promoted OANN, providing the nascent network — which is viewed with disdain by many reputable journalists — with cover against the White House Correspondents' Association. Trump even plugged OANN by name in a tweet last month as the alternative he has been asking for.

But this isn't the first time Trump has appeared to be switching media mistresses. When Fox soothes him, he reciprocates. When they rankle him, he pumps OANN.

OANN, which has roughly one-third of Fox's reach, with ratings reportedly lower than the Tennis Channel, appears to have no problem serving as the president's megaphone.

For instance, OANN hired former Trump campaign aide Michael Caputo — the newly-hired spokesman for the Department of Health and Human Services who recently disgraced himself with a barrage of racist, pandemic-related tweets — who hosted a special program dedicated to "the Ukraine Hoax." Late last year a network crew accompanied Rudy Giuliani and personal assistant Christianné Allen on a trip to Ukraine, which resulted in a three-part series that mainlined viewers with apparent Russian disinformation.

Spokespeople for Trump Jr. and Hicks denied involvement in the deal to Vanity Fair.

President Trump, who is in no financial position to acquire Fox News, views OANN as a fallback business opportunity should former Vice President Joe Biden defeat him in November, according to Vanity Fair, which reported the president might look to OANN as a "post-presidential television platform."

The cash from the buyout will reportedly help OANN increase its production values and campaign to expand its viewership, two elements Trump would demand of any home for a post-White House TV home.

Trump Jr. and Hicks have been wrapped in scandal before. The president's eldest son and his younger brother Eric were — along with Hicks and Dallas-based investment manager Gentry Beach — co-registrants for a nonprofit called Opening Day, which insinuated itself in Trump's inauguration. Trump's sons had to abandon the organization weeks after its inauguration event was announced, amid allegations that they were selling access to their father.

An associate of Gentry Beach declined to comment when Salon inquired about his possible involvement in the OANN deal.