From virtual farmers markets to CSA apps, farmers have gone digital to get produce to consumers

As consumers stay home, they're looking more closely at how — and from whom — they source their food 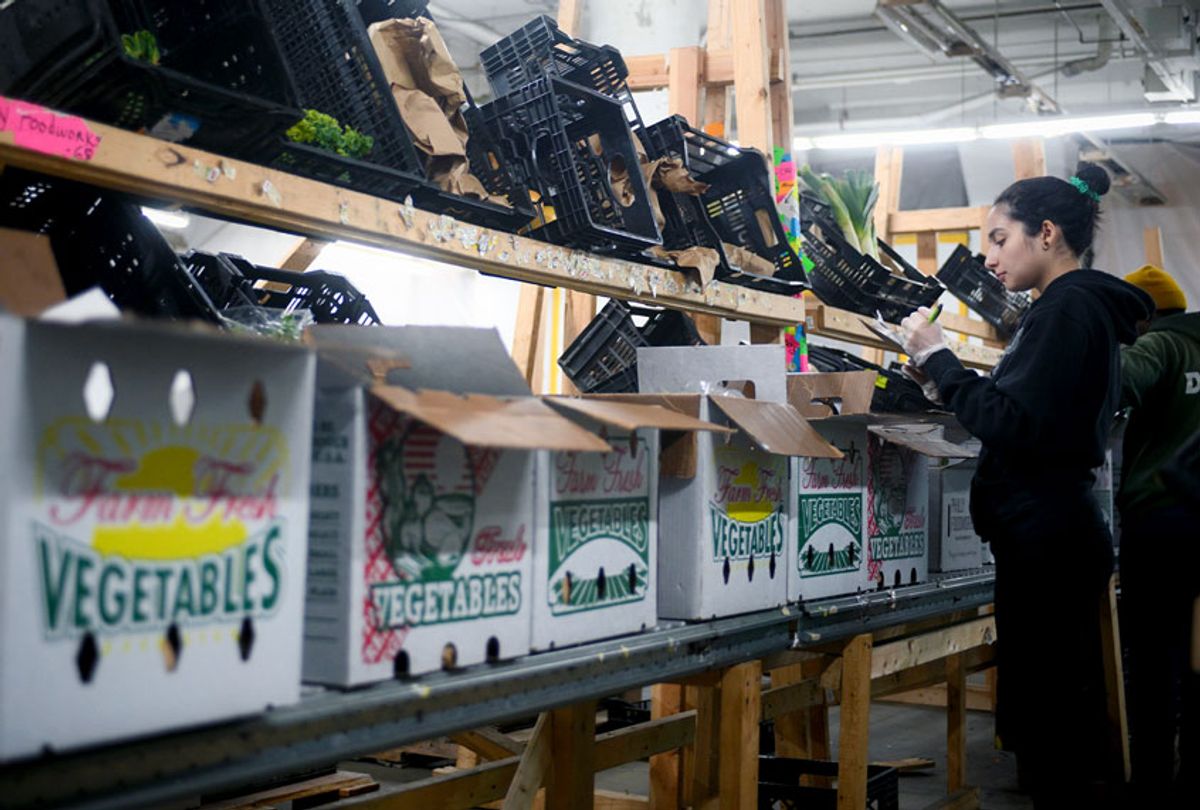 Crew members pick items to fulfill an online order of produce and vegetables, at the warehouse of Philly Foodworks, in North Philadelphia, PA (Bastiaan Slabbers/NurPhoto via Getty Images)
--

Since early March, when the World Health Organization declared a global pandemic, the novel coronavirus has illuminated the ways in which our food supply chains are uniquely precarious. An early rash of panic-buying left grocery store shelves empty of essentials like flour, yeast, produce, eggs, and meat. And as meat processors are struggling to keep workers safe from the outbreak, many big box stores are now instituting temporary limits on fresh beef, pork, and poultry.

Meanwhile, small- to mid-scale farmers who supplied predominately to chefs are struggling to recuperate the income they lost when many restaurants were mandated by states to close or reduce services. As Salon reported in March, many are attempting to pivot to a Community Supported Agriculture (or CSA) model.

In this time rife with uncertainty for both producers and consumers, there is now an increased need for and interest in technology that virtually bridges the connection between farm and kitchen table — and developers are stepping up to fill that need.

Simon Huntley is the founder and CEO of the agricultural tech platform Harvie.Farm.

"I grew up on a farm and have been working with farms on technology since 2006," Huntley said. "In 2015, I started to hear from my farms that they were having trouble finding customers for their Community Supported Agriculture [CSA] programs — these are the direct-to-consumer farm programs where members buy a box of farm products each week through the growing season."

After doing a lot of research and speaking with his customers about their needs, Huntley saw that his farms needed to adapt their technology and marketing to better serve the market.

"For example, one big barrier to these programs in the past is that each box delivered by the farms had the same thing for each customer, so you might get too much kale or beets when you don't like beets," he said.

Harvie currently works with 171 farms across the United States and Canada, allowing them to connect directly with local consumers via their platform. It is essentially a membership program — which is inspired by CSA programs. Consumers also have the option of purchasing one-time orders through the farms.

"Harvie allows members to set preferences, customize their box each week, and gives the farmer tools to pack customized boxes," Huntley said. "In general, we believe that it should be as easy to buy from local farms as it is to buy from Amazon — we want to allow farms to compete in this competitive marketplace."

According to Huntley, user interaction with the platform has increased pretty dramatically over the last two months as sales have increased by over 200%.

He believes that this is a convergence of factors: the shortage of grocery essentials has inspired consumers to go straight to the source to ensure their food supply; buying from local farms means less hands on your produce; and cooking from home has increased in light of stay-at-home orders, so people want access to fresher ingredients.

Other farm technology platforms are seeing an increase in usership, too. Food4All, which was founded by Kami Semick in Bend, Ore., allows users to subscribe to local CSAs and enables farmers and ranchers to upload inventory information from a laptop or smartphone. It instantly updates inventory levels as orders are placed. The software is free for farmers but charges consumers a small transaction fee.

"The increased interest really has been exponential in so many different ways," Semick said. "Producers who were already using Food4All to sell direct to their local community are now telling me that as soon as they get a product up, it's selling within minutes."

Additionally, Semick said, the novel coronavirus outbreak has encouraged a whole new subset of farmers who weren't using apps — or even webpages or social media — to advertise their products to come online.

"With COVID-19, we've seen this wave of producers who needed to be online lose their distribution channels to wholesale customers," she said. "So suddenly, they need to figure out how to get their product to the customer. So those folks who maybe were a little hesitant to take that leap into the online world, now we've seen that wave joining."

Semick said they have also found a new usership base in farmers market organizers who are now looking for ways to organize virtual markets with options for delivery or contact-free pick-up.

"So we now have farmers markets in Massachusetts, Maryland, West Virginia, Virginia, Wisconsin — online — all using Food4All as their platform," she said.

In addition to using specific apps and web platforms, agricultural organizations all across the country are now heavily leaning on social media as a way to connect local and regional farmers with consumers.

The Organic Association of Kentucky just concluded their first virtual CSA fair — a two-week Facebook event that allowed over 50 small to mid-scale farms to showcase their products. It was inspired by similar initiatives undertaken by state-affiliated CSA organizations in Portland, Ore., Madison, Wis., and in New York's Hudson Valley.

Brooke Gentile, the executive director of the organization, said that — per Facebook analytics — nearly 125,000 users participated in the event in some way, either through post engagement or attending some of the group's Facebook Live streams, which served to introduce viewers to regional farmers and demonstrate how to cook with various CSA ingredients.

Almost a third of the participating farms are now sold out for the season which, Gentile said, has encouraged her and her team to consider how to incorporate virtual elements into their scheduling, even once food systems eventually normalize.

"I think that the virtual CSA fair offers marketing support to farmers that are spread out across Kentucky," Gentile said. "So if we were previously just doing CSA fairs in bigger cities like Lexington and Louisville, there were a lot of farms that serve other locations that weren't getting that same exposure, and a lot of consumers in those other cities didn't have the opportunity to learn about CSA."

Both Huntley and Semick are considering the future, too. While neither anticipates that the surge in usership will continue indefinitely, they do think that the novel coronavirus has consumers thinking more seriously about how — and from whom — they source their food.

"Also, I think farms will continue to adapt technology," Huntley said. "This whole business of local food is moving online because it must survive both in terms of COVID-19, but also in terms of the broader market trends. One way I've been looking at it: our market has evolved in 4 to 5 weeks that would have taken 5 to 10 years to happen in more 'normal' times."